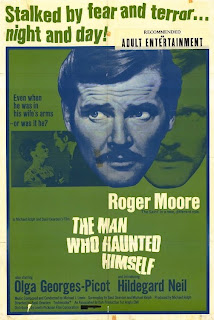 The Man Who Haunted Himself is a horror movie starring Roger Moore, and that in itself makes this an unusual movie. Purists might prefer this one to be described as a psychological thriller but I think it can pass muster as a genuine horror movie.

This much neglected 1970 British movie is also notable for having offered Roger Moore one of his most rewarding roles. The performance he delivers may well be the best of his career.

Roger Moore plays businessman Harold Pelham. By the standards of 1970 Pelham is a rather old-fashioned sort of chap. He dresses very conservatively, even down to the bowler hat. He is married and has two sons. Everything about him marks him as a creature of habit with fundamentally conservative instincts. When he crashes his luxury (but rather staid) Wolseley car he replaces it with another one exactly like it. That’s the sort of person he is.

For all his old-fashioned style he’s no fool. He is a partner in a successful marine engineering company. When a merger is proposed with a rival firm he is the only member of the board to recognise it for what it is, a takeover, and he’s the only one prepared to stand firm. 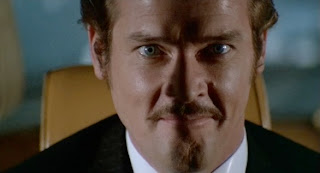 The car crash mentioned earlier opens the movie and it’s the key to what follows. Pelham is rushed to hospital but dies on the operating table. Luckily for him (or so it seems at the time) the doctors are able to get his heart started again and he subsequently makes a rapid recovery.

He is soon back at the office and everything seems normal, except for a few odd incidents that start to happen. It seems that he’s been doing things that he doesn’t remember afterwards. The thing is that he’s absolutely convinced that he hasn’t done these things. And some of these odd things he seems to have been doing are very much out of character. Harold Pelham is not the sort of man to chase young women or to frequent the gaming tables. But people distinctly remember his doing these very things. 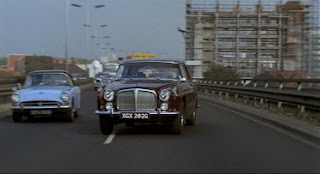 Pelham’s marriage was having a few problems. He and his wife Eve (Hildegard Neil) have drifted apart just a little. Eve seems to be just a little bored with her husband’s very serious attitude towards life, and they are having a few sexual problems. They’re really no more serious than the problems every marriage encounters from time to time and in the normal course of events they’d no doubt work themselves out. But these odd things Harold Pelham seems to be doing naturally add to the tensions.

At times Pelham suspects that somebody is impersonating him. At other times he thinks perhaps there’s something wrong with him. He even consults a psychiatrist, Dr Harris (Freddie Jones). He’s starting to get quite concerned and it’s getting him down a bit. Then he finds himself accused of unethical business practices. He, Harold Pelham, of all people. He is the last man to indulge in any kind of underhanded dealing. 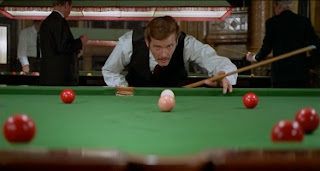 All this is bad enough, but worse is to follow. Those odd incidents that he has no memory of are getting more serious. He is fast approaching a crisis in both his professional and his private life. When the crisis does come it’s stranger than anything he had imagined, it’s worse than even his worst fears.

Anthony Armstrong’s story had first seen the light of day as an episode of the Alfred Hitchcock Presents television series in the 1950s. Screenwriters Basil Dearden (who also directed), Michael Relph and an uncredited Bryan Forbes expanded the story to feature-film length, and fairly successfully. Basil Dearden had a distinguished career as a director and he had done both thrillers and horror before this so he was a good choice to bring this story to the big screen.

This is a role that requires Roger Moore to do some serious acting and he rises to the challenge superbly. Anyone inclined to dismiss Moore as a lightweight actor will find this performance to be a very pleasant surprise. This is a very different Roger Moore from his more familiar roles as Simon Templar and James Bond. He really is excellent. He gets good support from Hildegard Neil. The supporting cast includes a number of faces that will be very familiar to horror fans. Thorley Waters is Pelham’s bumptious acquaintance Frank Bellamy, while Freddie Jones is a delight as the rather dotty psychiatrist. 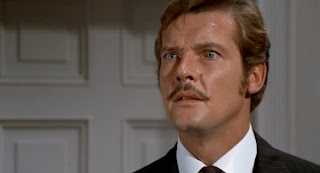 This is strictly low-key horror and it’s all the more effective for that. Until very late in the movie we can’t really be sure what is happening to Harold Pelham. The final revelation harks back to the car crash at the beginning of the film and it provides a tense and exciting finish.

The Region 4 DVD release offers a good anamorphic transfer but sadly no extras. The movie has also been released in Region 1 and Region 2 and on Blu-Ray. These versions apparently include an excellent commentary track featuring Roger Moore.

The Man Who Haunted Himself is a very unjustly neglected movie. It’s very well-crafted and well-acted and is highly recommended.
Posted by dfordoom at 15:28

Glad to see you review this film, it's one of my favorites. I stumbled on it years ago on youtube, and couldn't believe I'd never heard of it. (I later bought the DVD, which unfortunately, I don't always do). But this movie definitely should be seen, especially by people who think Roger Moore "can't act." Even though I like some of his James Bond films, I wish he did more films in this vein, rather than the cheesier, "wink at the camera" later Bond pictures he did.