Whether Cabiria was actually the first ever feature film may be debatable, but it was certainly the first cinematic epic. Originally released in mid-1914, before the First World  War, it can fairly claim to be one of the most influential motion pictures ever made. Its other claim to fame is that it introduced the character of Maciste. This strongman hero would go on to appear in countless Italian movies right up to the 1960s and would become the major hero of the peplum (Italian sword-and-sandal) genre. Cabiria is in fact the ancestor of that entire genre.

Director Giovanni Pastrone had been making movies as far back as 1908 but Cabiria was something new entirely. Even by the standards of movie epics Cabiria is astonishingly ambitious, both in terms of visual grandeur and in the complexity of the story it tells. Pastrone was also an important technical innovator, being the first film-maker to attempt tracking shots. Many of the innovations usually credited to D. W. Griffith were actually pioneered by Pastrone. Griffith would use them more boldly but Pastrone in many cases got there first.

Gabriele d’Annunzio, one of the key figures in late 19th an early 20th century Italian literature, wrote the title cards and much of the story (in collaboration with Pastrone). The influence of Gustave Flaubert’s brilliant 1862 novel Salammbô is obvious although the story also draws on a novel by Emilio Salgari. The primary source though was Livy’s history of Rome.

The movie was made by Pastrone’s own production company, Itala Films, and when released was an international sensation. 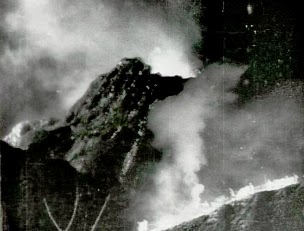 The movie is set against the background of the Second Punic War in the early 2nd century BC, with Rome fighting for survival against the Carthaginian armies led by Hannibal.

The movie starts in a town on the slopes of Mt Etna. The volcano erupts and Cabiria, the eight-year-old daughter of a wealthy merchant, is believed to have perished in the disaster. Cabiria is not in fact dead but by a series of mischances in the confusion she ends up in the hands of pirates, and this is merely the beginning of her troubles. She is about to be sacrificed to the Carthaginian god Moloch when she is rescued, at least temporarily, by a brave and kindly Roman named Fulvius Axilla (Umberto Mozzato) and his faithful black slave Maciste (Bartolomeo Pagano). Fulvius, Maciste and Cabiria will all find themselves pawns in the complex machinations of the Carthaginian noblewoman Sophonisba (Italia Almirante-Mazzini). 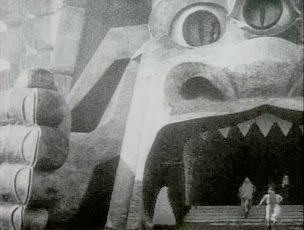 If this movie has a major flaw it is that the plot is just too complex and tries to deal with too many major political and military events. It all becomes a little bewildering, and there is insufficient focus on Cabiria’s own story. What has to be borne in mind is that the feature film virtually didn’t exist before this movie was made. Pastrone had to make up the rules as he went along. That he made a few mistakes and occasional lost control of his material is hardly surprising; what is more surprising is that it works as well as it does.

Sophonisba is the character who more or less dominates the movie and this is no bad thing. She is by a long way the most interesting character and Italia Almirante-Mazzini is by far the strongest member of the cast. Sophonisba can almost be seen as the first screen femme fatale or at least as a kind of proto-vamp. Almost, but not quite, since she never entirely loses our sympathy. At times she is ruthless and she is always scheming but then it has to be said that she is struggling to survive in a very perilous world and she is caught between two mighty (and very dangerous) empires, Rome and Carthage. She is courageous and determined so she is both vamp and heroine. 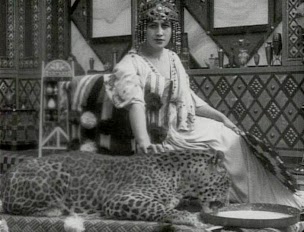 Pastrone’s visual style is best described as painterly. While he does at times move the camera he mostly relies on his sense of composition, making each shot seem like an historical painting come to life. It works because his compositions are so brilliant. His cutting is also, for 1914, rather bold and this saves the movie from the static quality that afflicts other very early feature films. It’s true that Griffith would surpass him in the field of editing but again Pastrone was the pioneer.

The pacing is rather leisurely although the movie’s slowness is due mainly to its excessively complicated plot.

The visuals are unquestionably stunning, not just by the standards of 1914 but by any standards. The sets are immense and overwhelming. The temple of Moloch in this film has inspired countless set designers. There are some spectacular stunts and they are clearly dangerous and clearly done for real. Other highlights are a volcanic eruption, the destruction of a Roman fleet, Hannibal’s crossing of the Alps (complete with elephants) and various battles. This movie has enough spectacular visual set-pieces for half a dozen movies. 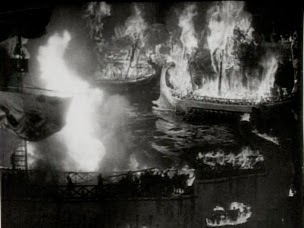 Kino’s DVD release is bitterly disappointing. The movie is heavily cut, although apparently a more or less uncut print survives. Picture quality ranges from good to awful. There are no extras.

Cabiria has immense historical importance, to both movie lovers in general and to cult movie fans. Despite some flaws it is more than just an historical curiosity. Its visual splendour carries it through some slow moments. Recommended.
Posted by dfordoom at 18:35