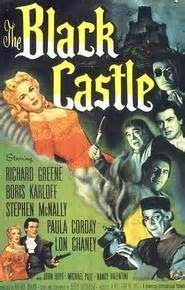 Universal’s The Black Castle was released in 1952. This is a swashbuckling adventure movie rather than a horror movie but it’s also very much a gothic movie and the horror elements are certainly there, and they’re prominent enough to ensure that horror fans are unlikely to be disappointed.

Sir Ronald Burton (Richard Greene) is an 18th century British adventurer. In Africa he had foiled the plans of the power-mad Count Karl von Bruno (Stephen McNally). Now two of Burton’s friends who had been with him in Africa have disappeared. They were last seen in the vicinity of the Count’s castle in Germany and Burton suspects the Count has imprisoned or (more likely) murdered them in revenge. Burton sets off for von Bruno’s castle to discover the fate of his friends.

He soon makes the acquaintance of some of von Bruno’s friends. And a vicious and unsavoury lot they are, particularly the smooth but sinister Count Ernst von Melcher (Michael Pate). On reaching the castle he initially finds no evidence of his friends but his suspicions grow even stronger. The wife of von Bruno, Countess Elga von Bruno (Rita Corday), is obviously a very unhappy woman and Burton finds himself drawn to her, a fact that rather unfortunately soon becomes known to the Count. Burton will eventually discover more from the rather disreputable Dr Meissen (Boris Karloff). But can he trust the doctor?

Burton’s major problem is that while he is finding out more about von Bruno’s sinister activities the Count is finding out more about him. If the Count makes the connection between his unhappy experiences in Africa and Burton then the Englishman’s life is going to be in serious jeopardy, to say the least. Burton is brave and resourceful but his only real allies are Countess Elga (who is likely to land him in a great deal of trouble since he is most probably going to have to do something to save her) and Dr Meissen, whose motivations are highly ambiguous. 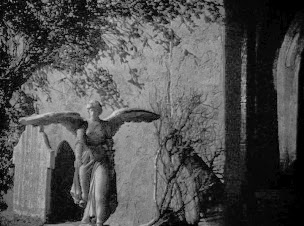 The Black Castle is never in danger of getting bogged down. The story moves along briskly and is liberally peppered with action, narrow escapes, thrills, and some genuine chills as well.

The general feel of this movie is very close that of The Strange Door, made a year earlier by Universal. That’s not surprising since both movies were scripted (and very competently scripted) by Jerry Sackheim and photographed by Irving Glassberg. One thing that this movies makes very clear is that Universal had not lost their touch when it came to creating gothic atmosphere on celluloid. Glassberg’s black-and-white cinematography is superb. The costumes are as lush as you’d expect in a picture (even a low-budget picture) from a major studio picture and the sets pile on the gothic atmosphere even thicker. In one or two scenes the sets look slightly familiar, suggesting they were left over and reworked from The Strange Door.

Nathan Juran’s success as a B-movie director was based on his ability to get the job done on time and on budget but he manages to do it with a certain flair here. 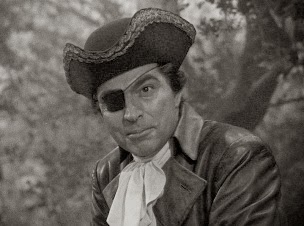 Horror fans will be disappointed to find that Boris Karloff is relegated to a supporting role. The good news is that when he finally gets a chance to do something he does it well. Lon Chaney Jr’s career followed the same sort of trajectory as Bela Lugosi’s a decade earlier - stardom coming suddenly and spectacularly followed by a precipitous and never-ending decline. Chaney has little to do here but look menacing, which he does well enough.

There’s no subtlety to Stephen McNally’s performance as the villain. Nor should there be. This is pure adventure and McNally quite rightly goes all out to make von Bruno a classic and rather scary and formidable and totally diabolical villain. Evil sadistic henchman roles were meat and drink to Australian character actor Michael Pate and this time he’s landed a substantial part and he’s in great form, even managing to match Stephen McNally in the maniacal laughter department. 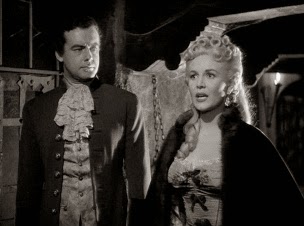 It’s Richard Greene who is the star here. English-born Greene’s film career never amounted to much although he was destined for major fame (and riches) on television back in Britain as Robin Hood. Swashbuckling roles were what he did best and he makes a fine hero in this outing.

Rita Corday (billed here as Paula Corday) is the heroine and turns in a solid performance.

Both this movie and The Strange Door are actually rather better than most of Universal’s 1940s horror/thriller movies. It may not have been a big production but it’s obvious that everyone involved put as much as they could into it. Every actor is perfectly cast and there are no weak links. In fact there are really no weaknesses at all to this movie - it all comes together in a very satisfactory and entertaining manner. And to make things even better there’s no tedious comic relief! 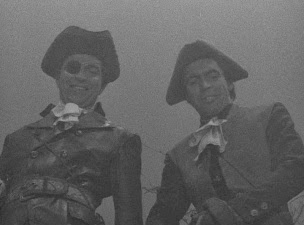 Despite Karloff’s relegation to a supporting role Universal decided to include this movie in their excellent Boris Karloff Collection DVD set. It was not only a shrewd move by Universal, it’s also one for which they are to be commended. If the Karloff name was the selling point they needed to justify releasing this movie on DVD then I have no problems with that - this is a terrific movie that thoroughly deserves to be available on DVD. The transfer is superb as well.

The Black Castle is a stylish, extremely well-made and exceptionally enjoyable  gothic adventure movie laced with some genuine horror moments and I have no hesitation in recommending it very highly indeed.
Posted by dfordoom at 02:00