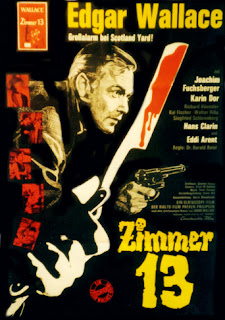 Zimmer 13 (Room 13) was one of the popular series of Edgar Wallace thrillers (known in Germany as krimis) made by German studio Rialto during the 1960s. Released in 1964, Zimmer 13 is one of the more conventional entries in this series, a factor that counts against it. In general the best of these krimis are the ones that are the most outrageous.

Sir Robert Marney (Walter Rilla) is a respectable English member of parliament but he wasn’t always quite so respectable. His past catches up to him when Joe Legge (Richard Häussler) appears on the scene. Twenty years before Marney and Legge were obviously involved in undertakings that were less than strictly legal. Marney has reformed but Legge has not. Now Legge wants to involve Marney in a spectacular train robbery he is planning.

Marney calls on the assistance of private detective Johnny Gray (Joachim Fuchsberger). Scotland Yard will also become involved, in the person of Dr Higgins (Eddi Arent), who seems to double as both detective and forensic scientist.

There is also a murder sub-plot that has very little, if anything, to do with the main plot. A series of grisly murders has been spreading terror throughout London. The victims are women and the murder weapon is a straight razor.

Joachim Fuchsberger was a fixture in the Rialto krimis and could always be relied upon to make a likeable hero. Siegfried Schürenberg, another equally reliable fixture in these movies, plays Scotland Yard chief Sir John. Eddi Arent usually provided the comic relief but he gets a more substantial role this time. Arent’s comedy style is an acquired taste but it has to be said that his performances can be appreciated a great deal more in the subtitled German versions rather than the more familiar poorly dubbed English dubbed versions. Arent has fun in this movie as Dr Higgins’ scientific experiments invariably end in explosions, often threatening the survival of Higgins’ great love, a store dummy named Emily. I’m gradually becoming something of an Eddi Arent fan.

Karin Dor also has more to do than usual, in the key role of Marney’s beloved daughter Denise.

The heist sequences are quite well done. There are touches of the outrageousness that makes so many of the krimis firm cult favourites. In general though this movie plays it a little too straight. As always it’s amusing to see the British police armed to the teeth, even toting submachine guns!

The London settings are of course quite unconvincing but this is one of the charms of the krimis, with obviously German locations standing in for English settings. The castle that supposedly belongs to Sir Robert Marney is a nice touch, it being naturally assumed that all prominent Englishmen live in castles.

Harald Reinl was a competent director who always handled this sort of material fairly well.

There’s a hint of sleaze and there’s even a touch of gore, an unusual feature for a krimi.

The German DVD release from Tobis Home entertainment includes both the English dubbed version and the original German-language version with English subtitles. The anamorphic widescreen transfer is flawless.

Zimmer 13 is reasonable entertainment. If you’re new to the krimi genre there are better places to start than this one. Recommended if you’re a fan of the genre.
Posted by dfordoom at 13:57

I figured out who the serial killer was pretty quickly. To be honest, it would have been better off in a different film - it basically meant that something that's meant to be fun and entertaining had a really bleak ending.

But as you say the heist stuff is great - although God knows what real career criminals would make of this gang!

One to watch for the cast!