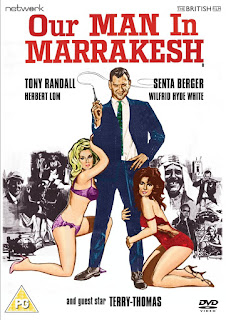 Our Man in Marrakesh (also released under the title Bang! Bang! You're Dead!) is a low-key spy spoof from prolific producer Harry Alan Towers whose spectacularly uneven output   embraced just about every exploitation genre one can think of. This particular production can best be described as innocuous but fairly entertaining.

Mr Casimir (Herbert Lom) is a spymaster anxiously awaiting a courier bringing two million dollars to buy some sensitive documents that he’s obtained by presumably rather nefarious methods. He knows the courier is one of six people catching a bus from Marrakesh but unfortunately he has no idea which one is the courier. Compounding the problem is that not one of the six people is what he appears to be.

Andrew Jessel (Tony Randall) has come to Marrakesh to build a hotel but he’s masquerading as an oilman. Krya Stanovy (Senta Berger) has half a dozen explanations for her presence in Morocco, none of them true. Mr Fairbrother (Wilfred Hyde-White) claims to be selling bathroom fittings while Mr Lillywhite (John le Mesurier) claims to be a promoter of package tours.

Jessel and Krya are thrown together when a dead body is found in Jessel’s hotel room. They have the police after them and Casimir’s men as well, led by the sinister Jonquil (Klaus Kinski). After being chased over half of Morocco they encounter an unlikely chieftain of a band of Arab bandits - the Eton-educated Al Caid (Terry-Thomas). 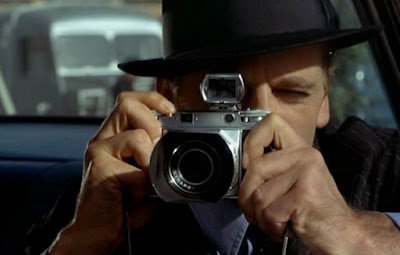 The plot is not exactly strong on originality but it doesn’t really matter. Don Sharp’s typically energetic direction ensures that the action doesn’t flag. And there is quite a bit of action.

This movie’s biggest asset is the delightful cast. Tony Randall might be an unlikely hero for a spy movie but this is hardly a serious spy movie and in any case Andrew Jessel is the archetypal innocent caught up in a web of espionage that he finds utterly bewildering and Randall has no difficulty playing that sort of character. In fact he’s rather good. 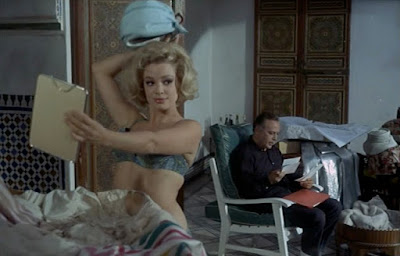 Senta Berger manages to be slightly ditzy, glamorous, mysterious and appealing which is exactly what her rôle calls for. Herbert Lom oozes smooth sinister charm in the inimitable Herbert Lom manner. Klaus Kinski was always well cast as a colourful heavy while Margaret Lee is fun as Casimir’s dotty girlfriend. John le Mesurier and Wilfred Hyde-White are wonderful as ever while Terry-Thomas sparkles as the old Etonian brigand leader. It’s a superb cast perfectly suited to the material.

While it was the Bond films that caused the 60s spy movie craze Our Man in Marrakesh is not, unlike the Derek Flint movies (such as Our Man Flint) or the Matt Helm movies (such as The Wrecking Crew), a spoof of the Bond movies. It’s a spoof of an earlier generation of spy movies - movies like Hitchcock’s North by Northwest - which typically featured an ordinary guy who gets mixed up in espionage very much against his will. 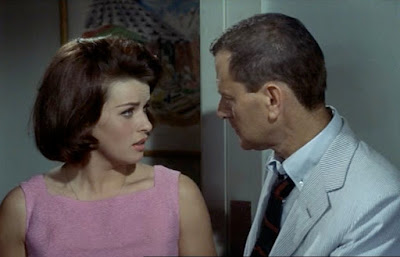 Don Sharp was a logical choice to direct. He could always get good results on a limited budget and he was more than competent when it came to action scenes (and this one includes a couple of pretty decent action set-pieces).

The location shooting in Morocco certainly paid off, giving the movie the ideal atmosphere of intrigue in exotic locales.

While this is a spoof it’s a gentle kind of spoof. Don’t expect the outlandishness of a Matt Helm movie. This is a much more low-key sort of movie. There’s plenty of amusement to be had but then it throws in a moderately serious spy movie climax with a bit of real excitement. 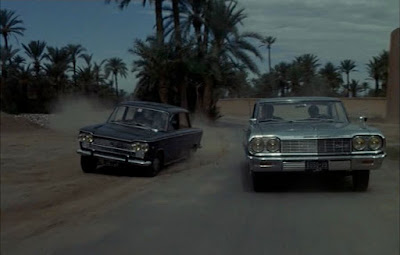 This DVD is typical of Network’s releases - a good anamorphic transfer, no extras, and fairly reasonably priced.

Our Man in Marrakesh is the sort of movie that could never be made today. It’s innocent gently tongue-in-cheek good-natured fun with zero social comment and zero irony, absolutely no graphic violence and barely a hint of sex. It aims to do nothing more than deliver light-hearted entertainment and it succeeds admirably. It also has a simply wonderful cast. Highly recommended.
Posted by dfordoom at 11:35