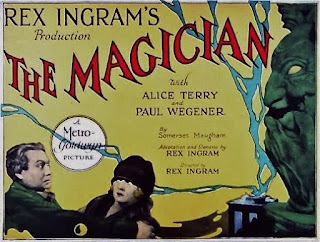 The Magician is a 1926 horror melodrama based on W. Somerset Maugham’s novel of the same name. It’s a movie that deserves to be better remembered - in fact it’s one of the best American horror movies of the silent era.

Maugham’s novel tells the story of magician Oliver Haddo. The character was based on Aleister Crowley. Maugham had met Crowley and taken an immediate dislike to the man. Crowley was of course a charlatan, although a rather interesting one.

In the movie Haddo (played by Paul Wegener), an occultist, pseudo-scientist, hypnotist and would-be alchemist, is searching for a magical formula that will enable him to create life. Having found the formula all he needs is the heart blood of a pure maiden, and he finds a suitable victim in the person of sculptress Margaret Dauncey (Alice Terry). Margaret is part of the Parisian artistic avant-garde and moving in such circles it’s perhaps not surprising that she should encounter a dangerous madman like Haddo.

Margaret is engaged to a brilliant young American surgeon, Arthur Burdon (Iván Petrovich), who has saved her from paralysis after a freak accident in her studio. One of her statues, a rather grotesque faun, fell on her and crushed her (in a wonderfully bizarre scene that sets the tone of the picture rather well). Oliver Haddo is determined to prevent this marriage and he uses his hypnotic gifts to persuade Margaret to marry him. Dr Burdon, along with Margaret’s guardian Dr Porhoet (Firmin Gémier), is equally determined to win her back and to save her from the grisly fate Haddo has in store for her. 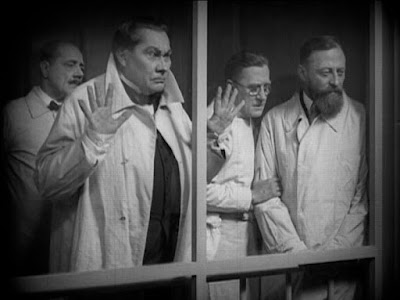 Irish-born Rex Ingram was one of the great silent film directors. He was never particularly happy with the Hollywood approach to film-making and made many of his movies (most of which starred his wife Alice Terry) outside the US, although still under the MGM banner. Ingram’s career more or less ended with the introduction of talking pictures.

The Magician features a good deal of location shooting and despite being a silent film it has a surprisingly modern feel to it. Those who avoid silent movies because of the exaggerated acting styles of the period need have no fears with this movie - the acting is extremely naturalistic. 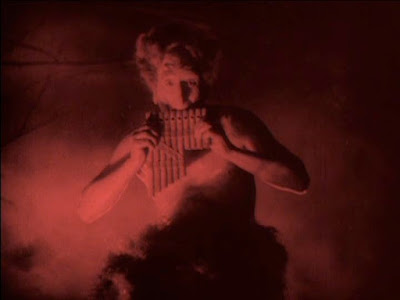 Even Paul Wegener as the villain resists the temptation to indulge in histrionic gestures and his character is all the scarier for his restraint. Wegener was most famous for his roles in classics of German Expressionist cinema such as The Golem. Alice Terry underplays as well, and does so very effectively.

It’s the visuals that are the heart of the film and Ingram proves himself to be a master in this department. He avoids the extremes of German Expressionism but this film has an abundance of superbly atmospheric and subtly sinister images. The one sequence in which Ingram really lets himself go is a hypnotic dream sequence but despite its excessiveness it works very well without becoming merely silly. 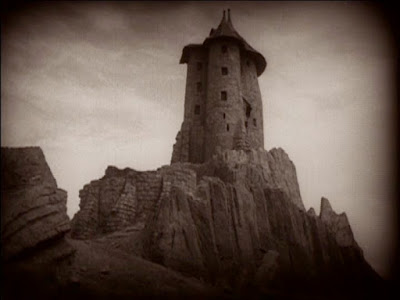 The Magician has all the themes that would soon become such familiar ingredients of the classic horror movie - a mad scientist villain who tries to play God in time-honoured Dr Frankenstein style, with the sort of laboratory that all self-respecting mad scientists should have, a wonderfully gothic sorcerer’s tower, a ghastly experiment carried out at the height of a raging thunderstorm, a damsel in distress, a noble hero determined to save said damsel, a malevolent dwarf assistant for the mad scientist,  and plenty of creepy gothic atmosphere. It’s also remarkably well-paced.

The sets are terrific and the art direction in general is magnificent.

Like so many silent movies this one makes good use of tinting, a technique that sadly went of fashion after the end of the silent era. 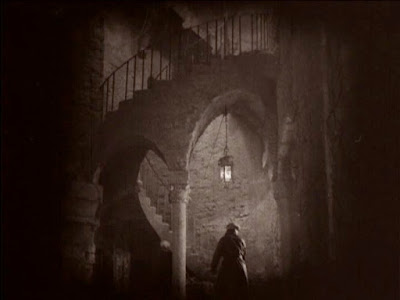 The Warner Archive made-on-demand DVD features a pretty decent print. There’s some print damage but on the whole the image quality is clear and crisp. Considering the age of the film and the fact that it has not been subject to a full-scale restoration it has to be said that it looks exceptionally good.

The Magician is visually stunning and very entertaining. While it’s a genuine horror movie it’s pure melodrama in tone, which is fine by me. A true neglected masterpiece of silent cinema. Highly recommended.
Posted by dfordoom at 20:22

Fantastic film. It really sets the stage for all of the Universal horrors of the 30's and 40's. James Whale must have seen this film. Rex Ingram was indeed one of the greatest directors of the silent era. I also recommend Mare Nostrum, The Prisoner of Zenda and The Four Horsemen of the Apocalypse. Excellent review.