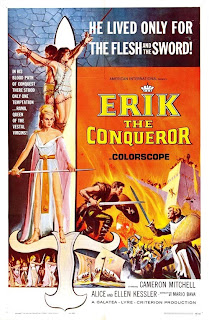 Erik the Conqueror is an early Mario Bava effort, release in 1961. The original Italian title was Gli invasori. It was released in Britain as Fury of the Vikings and in the US as Erik the Conqueror. Bava had worked on a number of peplums and had made Hercules in the Haunted World earlier that year so he had by this time accumulated plenty of experience in the making of action-adventure movies and he is clearly very comfortable with this kind of picture.

Like any good historical epic this one plays fast and loose with historical fact, to the point where it can best be described as a historical fantasy.

It is somewhere around the 8th century of the Christian era and the Vikings have been raiding Britain for many years, even establishing their own miniature kingdoms in the British Isles. This is not quite the Vikings vs the British picture you might expect. Both the British and the Vikings are portrayed fairly sympathetically. Indeed it seems likely that there will soon be peace between them, until an ambitious and unscrupulous British lord, Sir Ruthford (Andrea Checchi), sets them at each other’s throats again in furtherance of his own schemes for self-aggrandisement.

I’m using the term British deliberately since it’s not entirely clear if the Vikings’ adversaries are English or Scottish. It seems to depend on which version of the movie you see!

Eron is in love with Daya, a vestal virgin pledged to the gods. That’s likely to land him in a good deal of trouble but he reckons on becoming king, after which he can release her from her vow. Daya’s twin sister Rama will fall in love with the young Duke of Helford, not knowing that she has fallen in love with Eron’s brother.

Eron and Erik are of course destined to meet again. The circularity of the plot is emphasised by key scenes at the beginning of the movie that are echoed by similar scenes at the end. Both Eron and Erik believe in destiny, and destiny is not something any man can evade.

The scheming Sir Ruthford captures Queen Alice by betraying her castle. Destiny will not only bring the two separated brothers together, it will also bring them both into deadly conflict with Sir Ruthford.

The Viking movie craze in Italy in the early 60s was triggered by the international success of the Hollywood epic The Vikings. The plot of Erik the Conqueror is inspired to a degree by that of the American film. It’s a good story and it offers plenty of potential to someone like Bava.

Erik the Conqueror has the right combination of action, tragedy and romance and when you add Bava’s visual magic you have all the ingredients for success. And in fact the movie proved to be extremely successful at the box office.

The acting is generally quite good. Daya and Rama are played by real-life twins Alice and Ellen Kessler, popular cabaret stars who had appeared in many movies but had never taken on serious acting roles before. They both acquit themselves fairly well. Andrea Checchi makes a fine conniving villain. George Ardisson is adequate as Erik. The acting honours though go to Cameron Mitchell as Eron. Mitchell was an accomplished actor who had enjoyed considerable success on the Broadway stage. His promising American film acting career was cut short by an unfortunate misunderstanding with the Internal Revenue Service which led him to leave the US and seek work in Britain and in Europe. He was certainly a class above the kind of actors you usually find in movies like this and he gives a fine performance as a character who is not always wholly sympathetic but who grows in stature as the story progresses. Bava was obviously impressed by him and stared him in two further movies.

Bava acted as his own director of photography and the movie is full of distinctive Bava visual touches. Bava’s flair for the use of colour, not just for its own sake but to achieve the dramatic effects he desired, is very much in evidence. He was fond of using coloured gels but he always knew how far he could go. The superb visuals enhance the story rather than dominate it. So much has been written about Bava’s genius with colour that there’s little I can add. Bava was equally brilliant at coming up with ways to make a low-budget movie look classy and expensive.

This movie was a very low budget movie although you’d never know that by looking it it. Few directors have ever been able to match Bava’s genius for accomplishing so much with so little. The spectacular sea battle scene looks as if it must have cost a fortune. In fact Bava did it for a total cost of less than a hundred dollars. He uses matte shots and miniatures and blue screen shots throughout the picture and always makes them look convincing. He needed an impressive-looking castle on a hill. He did it with a photo cut out of a National Geographic magazine and a glass matte shot and it’s as splendid a castle as you could hope to see. He even contrived to have a flag flying from the battlements fluttering in the breeze. He had very little money to work with but he had patience and he had a flair for improvisation and that was enough.

There are some great sets, many left over from earlier films (a useful cost-saving measure). Bava’s skill makes them look extraordinarily atmospheric.

The Anchor Bay Region 1 DVD offers a very fine transfer and some worthwhile extras, including a commentary track by Bava expert Tim Lucas and an interview with star Cameron Mitchell (who clearly had great admiration for Bava). It’s a DVD release that is fully worthy of Bava’s talents.

Erik the Conqueror looks magnificent and it’s consistently entertaining. You can’t ask for more. Highly recommended.
Posted by dfordoom at 19:34