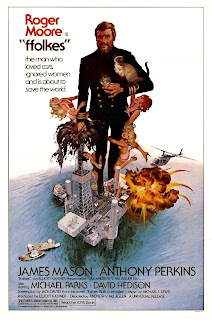 Sir Roger Moore is always going to be remembered as The Saint and as James Bond but over the course of the 1970s he did a number of rather interesting movies in which he demonstrated unexpected versatility as an actor. One of these was ffolkes, also released as North Sea Hijack.

A group of terrorists hijack a North Sea oil drilling platform. They demand a ransom of £25 million or they will blow it up. The British government may have no alternative but to pay. If the platform is blown up the total costs to the nation’s economy will run into billions of pounds. There is only one man who may be able to help them. That man is Rufus Excalibur ffolkes (Roger Moore). To say that ffolkes is an eccentric would be an understatement of epic proportions, but he’s all they’ve got and they'd better hope he can do the job.

ffolkes and his team of divers specialise in this sort of thing. ffolkes had in fact already been contacted by Lloyds of London who were concerned about the security of North Sea oil rigs, they being the ones insuring these facilities. ffolkes had come to the conclusion that the only way to hijack a North Sea oil rig would be by first hijacking one of the supply ships. That is exactly the plan the real terrorists adopted. Fortunately ffolkes had already given thought to ways in which such a situation could be dealt with. 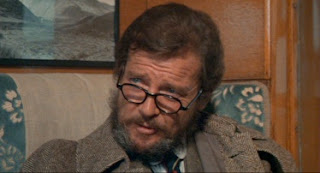 The terrorists are led by Lou Kramer (Anthony Perkins typecast yet again as a crazy). They hijacked the supply ship Esther. The oil company had been in a whimsical mood when these facilities were commissioned. The drilling platform is named Ruth while the main platform several miles away is named Jennifer. Having taken over Esther the terrorists have proceeded to the two platforms and have rigged limpet mines to both as well as rigging a bomb on board Esther. At a touch of a button Kramer can blow up either platform or the supply ship.

The Royal Navy is responsible for the protection of North Sea oil installations but this is a job that is beyond the capabilities even of their Royal Marine Commandos. Admiral of the Fleet Sir Francis Brindsen (James Mason) is not happy about the idea of civilians being employed to do the Navy’s job but he accepts that there is no alternative. ffolkes and his men are the only ones with the necessary specialised expertise. 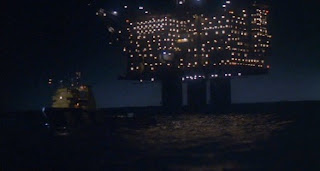 ffolkes will have to find a way to get both himself and Admiral Brindsen on board the Esther. Having the admiral there is the only way to convince the terrorists that the British government really does intend to negotiate with them. In fact the government has not the slightest intention of negotiating but they have to make Kramer think that they will. ffolkes has a plan for such a situation but it will demand split-second timing and a certain amount of luck. Or at least an absence of bad luck.

Director Andrew V. McLaglen helmed a number of action adventure films during his career and he displays a very sure touch. Jack Davies wrote the screenplay based on his own novel, the film rights for which had already been sold before the novel was published.

Anthony Perkins never had any difficulty in playing psychotics and he’s at his twitchy best here. James Mason is good as always although his part is rather undemanding. Jack Watson as the Norwegian skipper of the supply ship and David Hedison as the man in charge of Jennifer are both solid. 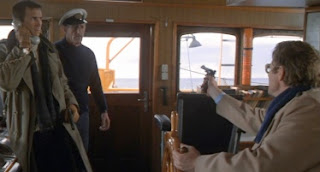 Roger Moore is the star here and he gives a full-blooded and highly entertaining performance as the wildly eccentric ffolkes, whose passions are cats, needlepoint and whisky, and who intensely dislikes women. He manages to make ffolkes convincing despite his oddities.

This movie is about as far removed from the Bond movies as any thriller could be. Everything here is in the realm of the possible. This is a movie that tries very hard to be a thoroughly realistic thriller dealing with a situation that is entirely plausible, and it succeeds very well in that aim. It has to rely on the tried-and-tested techniques of suspense rather than on futuristic gadgets. Being a thriller that is the complete antithesis of the Bond movies must have been one of the attractions for Roger Moore, the other attraction being the chance to play such a larger-than-life eccentric. 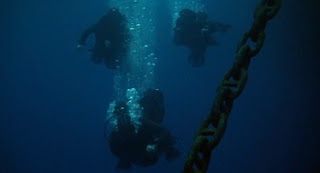 The contrast between the wildly unstable Kramer, played by Anthony Perkins as a kind of human bomb that could detonate at any moment, and the ice-cold ffolkes works well.

The Region 4 DVD release offers a good anamorphic transfer with no extras.

ffolkes is a taut well-made action thriller that delivers the goods, with Roger Moore’s fine performance being a major bonus. Highly recommended.
Posted by dfordoom at 16:47