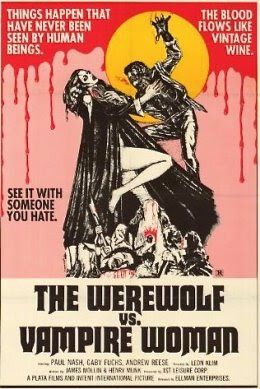 It’s one of countless movies starring Paul Naschy as werewolf Waldemar Daninsky. He’s an Angel-from-Buffy kind of werewolf, tortured by the evil he’s done and searching for redemption, a redemption that can only come through love. In this case he’s brought back to life when a police surgeon unwisely decides to remove the silver bullet that killed him from his heart, to prove that the legend that this will bring the werewolf back to life is just silly peasant superstition. That’s one mistake this particular police surgeon won’t make again.

Naturally the plot involves two attractive female students wandering about eastern Europe researching legends about vampires and werewolves, a particular hazardous undertaking in the 1970s when vampires and werewolves seemed to be remarkably common in those parts. They’re especially interested in the legend of Countess Wandessa, who was put to death for drinking the blood of virgins. She was killed by a holy cross, the only certain way to ensure she cannot return to life, and of course the first thing our students do when they discover and dig up her remains is to remove the cross from her breast.

Meanwhile the girls have befriended a slightly gloomy local nobleman, not realising he’s the famous werewolf Daninsky. One of the young women fall in love with him, and he allows himself to believe she may be able to release him from his curse. But first something has to be done about all these vampire women.

A certain amount of cheesiness is almost unavoidable in a werewolf movie. Despite this director León Klimovsky does manage to pull off a few effective scenes, with the floaty vampire women being fairly spooky. Paul Naschy does the sympathetic, tortured but romantic werewolf thing well. It has reasonably effective gothic atmosphere. I suspect the Region 4 release has been substantially cut. The running time seems suspiciously brief compared to that given on IMDb, and for a 1970s eurohorror movie it’s also remarkably lacking in eroticism.

Not a great movie, but entertaining enough, and it should satisfy hardcore werewolf fans.
Posted by dfordoom at 14:48