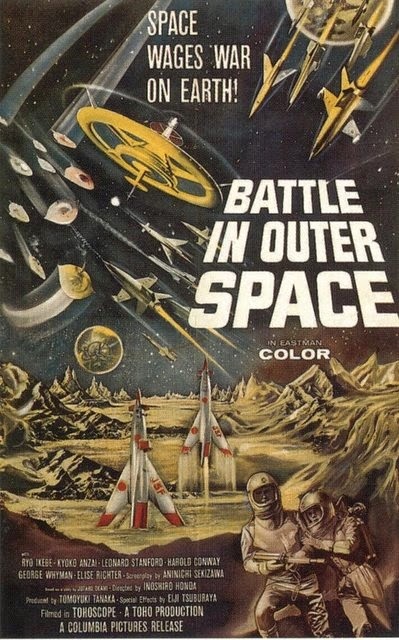 Battle in Outer Space is not one of Ishirô Honda’s most highly regarded movies but it may be his most entertaining work. It really is extraordinarily good fun. This is pure space opera and it’s superbly done.

It’s a movie that hits the ground running, opening with the destruction of a Japanese space station by alien spaceships. We never really find out who these aliens are but we know they intend to conquer the Earth.

The aliens have the advantage of a super-weapon - a freezing ray. Of course as we all know, if an object’s temperature decreases rapidly its gravity will also decrease rapidly(!) so when the freezing ray hits an object it flies into the air due to its negative gravity. This is the kind of science that makes me love science fiction movies.

The aliens have established an advanced base on the Moon. Fortunately Japan has two advanced spacecraft ready to go and sixteen astronauts from various countries set off to destroy that base. When they reach the Moon they transfer to two very cool moon vehicles. They locate the alien base and a battle ensues. The aliens have another secret weapon - mind control. They can turn people into willing slaves who then serve the aliens. This mind control however only seems to work on a handful of human subjects.

The battle on the Moon is just the beginning. A full-scale attack by the aliens is imminent but Earth scientists (led by the Japanese of course) have constructed rocket fighters to oppose the invasion. Another major battle follows.

You expect that sooner or later Tokyo will get stomped but oddly enough New York is the first target, with much devastation being caused by the alien anti-gravity rays. Tokyo’s turn will come later.

The plot is, as you may have gathered, rather on the thin side. This is not a problem as the movie relies on non-stop action and spectacle and on those counts it delivers the goods so magnificently that the viewer is unlikely to have time to worry about the plot. And too much emphasis on plot would have slowed down the action.

The special effects are variable in quality. There’s some very clumsy use of matte paintings early on. On the whole though the special effects are excellent. There’s some superb miniatures work. The spaceships and the moon rovers look terrific. The destruction caused by the anti-gravity beams is rendered quite cleverly. The buildings hit by the beam can’t just explode in a normal way - they have to explode upwards, and these effects look pretty good.

The sets and costumes look great. The problem of showing the appearance of the aliens, always a potential weakness in a movie of this type, is (very wisely) avoided altogether. The only times we see the aliens they are wearing spacesuits that hide their features completely. They are very small in stature and they don’t move quite like humans and this comes off quite well.

An irritating feature of many Japanese science fiction movies is preachiness. Thankfully Battle in Outer Space mostly avoids this pitfall. There is a message about an external threat causing all the nations of Earth to work together which betrays a rather naïve belief in internationalism but at least there’s no heavy-handed pacifist message. This is a full-scale alien invasion and humanity either fights back or dies.

This movie is bundled with Mothra and The H-Man in Sony’s Icons of Sci-Fi: Toho Collection boxed set. Each movie gets a disc to itself. Battle in Outer Space gets a lovely anamorphic transfer with nicely vibrant colours. Both a Japanese-language version with sub-titles and an English are included, plus a lively and informative (and very respectful) audio commentary by Steve Ryfle and Ed Godziszewski.

This is an outstanding movie, and I've always remembered how terrific it was since I saw it as a child. Yeah, the antigravity thing befuddled me then and to this day, but it's top notch. I've often wondered if it's a prequel to THE MYSTERIONS.