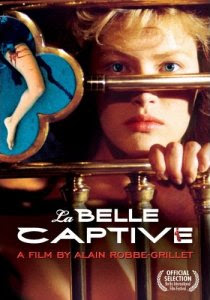 Novelist Alain Robbe-Grillet is best-known in film-making circles as the man who wrote the screenplay for the brilliant Last Year at Marienbad. He has also directed a number of films himself, including La Belle Captive. Released in 1983, it was based on his own novel of the same name, which was in turn inspired by the paintings of the Belgian surrealist René Magritte. If all of that leads you to expect a puzzling and rather cryptic movie then you’re spot on. Walter is some kind of detective, or perhaps secret agent is closer to the mark, working for the enigmatic leather-clad motorcycle-riding Sara Zeitgeist. While on an assignment he meets a beautiful but mysterious woman, Marie-Ange, in a bar. Later on that night he finds Marie-Ange lying on the roadway, handcuffed and covered in blood. Seeking assistance at a nearby house, he encounters a group of somewhat sinister, very creepy and obviously powerful and wealthy men, who seem to be under the impression that he is offering to sell this young woman to them.

Things get more baffling still when he later finds out that the young lady has been dead for several years; after possibly spending the night with her (or was it a dream?) he wakes to find what appear to be bite marks on his neck. He is also being followed by a man claiming to be a police inspector. From this point on things become more confusing still, with the whole movie being possibly no more than a succession of dream images.

The DVD includes no extras, apart from a theatrical trailer, which is a pity since it’s the sort of movie that would probably benefit from some background information. You certainly need at least a vague familiarity with Magritte’s paintings, images from which recur throughout the film.
Posted by dfordoom at 14:53