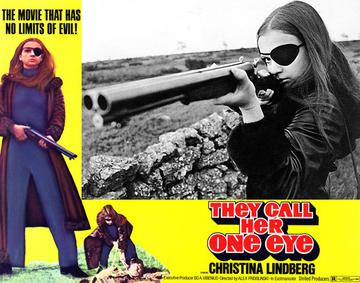 Thriller: A Cruel Picture (released in the US in a savagely cut version as They Call Her One Eye, 1974) is one of only three films made by Swedish writer-director Bo Arne Vibenius, all of which encountered serious distribution and censorship problems.

A young girl was raped as a child and the trauma has left her a mute. She now lives an idyllic existence on a country farm, or at least she did until she encountered Tony. He kidnaps her and forces her into a life of drug addiction and prostitution. But Tony makes one fatal error. He gives the girl (now named Madeleine) one day off per week. She uses her days off to train herself to be the perfect killing machine. She studies martial arts. She becomes a crack shot with a rifle or handgun, although her favoured weapon is a good old-fashioned double-barreled shotgun. She also learns advanced driving techniques from a rally driver.

She certainly intends to have her vengeance, but she has infinite patience. She has accumulated quite a hoard of money, by offering extra services to her clients. She will wait for the right moment. Although her revenge is a long time coming the movie is never dull. In fact it’s perfectly paced, with the long process by which Madeleine hones her killing skills inexorably building up the tension.

The plot is a fairly standard revenge plot, and although in 1974 female revenge movies were comparatively rare they were soon to become quite a considerable sub-genre. The plot doesn’t really matter in this type of movie, which is just as well because this one really stretches credibility to the limit, with the girl becoming a hopeless junkie within about week, and apparently unable to escape because if you go 36 hours without a hit it means instant death. What does count in this kind of film is the execution, and this one is done with considerable style.

The element that really makes this one something special though is Christina Lindberg as Madeleine. Lindberg has a rather minimalist acting style (which seems to be a common characteristic among Swedish actresses, including the truly great ones), but it works extremely well. In scenes where many actresses would be tempted to go over-the-top with emotional outbursts Lindberg takes an exceptionally subtle approach. But you can see Madeleine internalising her pain. She embraces it, because it’s her pain that makes her strong. While Lindberg is best known for her many softcore porn movies during the late 60s and early 70s she was an interesting and effective actress in the right role.

Thriller: A Cruel Picture ran into major censorship trouble almost everywhere at the time of its original release. The Synapse DVD release seems (judging by the running time) to be completely uncut, and it’s difficult to understand why it upset the censors so much. But then trying to make sense of something as absurd as censorship is the sort of thing that can send you mad. There’s a lot of nudity and some sex scenes and some sexual violence, but considering the subject matter that’s unavoidable and the sex is handled with remarkable restraint. There’s also plenty of violence, but again it’s done with restraint. By 1970s standards there’s very little gore. I can only assume it was the drug-taking scenes that aroused the wrath of the moral guardians, and considering that the movie takes such an extreme anti-drugs stance that’s just one more instance of the stupidity of censors. The movie is certainly much less harrowing than some of the other female revenge movies of the time, such as I Spit On Your Grave.

The Synapse DVD is disappointingly short on extras but it’s a nice transfer and most importantly the film is uncut. This is a classic of exploitation cinema, and a must for cult movie fans.
Posted by dfordoom at 20:20

Reading your account of it, our heroine sounds more like a female Count of Monte Cristo than I first realized, though Lindberg gets right to killing without the elaborate scheming of Edmond Dantes. In any event, it's an indisputably powerful film, and Lindberg's power was recognized internationally. Anyone who likes her here should check out the Japanese film available in the U.S. as Sex and Fury, which I highly recommend.

Sex and Fury is a great movie. I reviewed it here just recently. I'm a big fan of Norifumi Suzuki's movies in general.