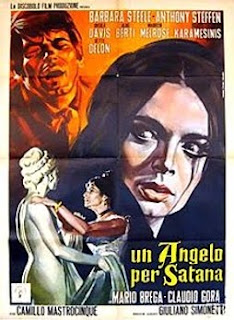 An Angel for Satan (Un angelo per Satana) is not one of the more highly thought of of Barbara Steele’s Italian gothic movies. Which is perhaps a pity because it’s really a highly entertaining slice of eurohorror.

Freak weather conditions have caused the water levels in an unnamed lake to drop dramatically. The receding waters have revealed a statue, a statue with an evil reputation. This statue of a nude woman is apparently cursed. Nevertheless the owners of the estate have commissioned an up-and-coming sculptor to restore the statue. But in fact the Count who awards this commission is not the real owner of the estate. The real owner is Harriet Barbara Steele), a young woman who has been at school in England.

The statue is a likeness of one of Harriet’s forebears, and bears a striking resemblance to her. The statue ended up at the bottom of the lake as a result of the jealousy of another woman, a woman who cursed the statue. The curse has endowed the statue not only with the property of bringing misfortune to the local villagers, but with an ability to exert an uncanny influence on Harriet. She takes on aspects of the personality of her ancestress, with unfortunate results. Her lusts cause ch 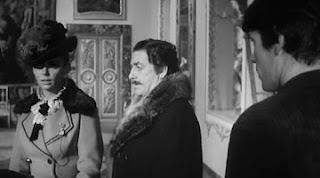 aos and misery. The unlucky sculptor finds himself drawn into her web, while her personal maid and the local school teacher with whom she is in love are also drawn into her plots and her general taste for creating mayhem.

Director Camillo Mastrocinque does a competent job. The movie is well-paced and consistently entertaining. It lacks the visual brilliance of a Bava movie but it still looks quite impressive. The acting overall is quite adequate but Barbara Steele dominates proceedings so completely you scarcely notice any 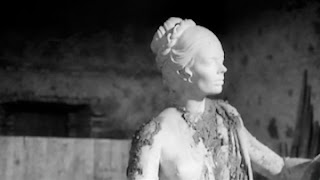 one else. There’s no need to talk about the special effects because there aren’t any. It’s a movie that doesn’t require them. It does have plenty of atmosphere, and the sets and costumes look good.