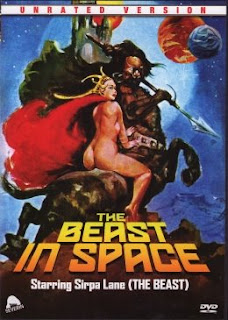 The great thing about Alfonso Brescia’s movies is that they can always surprise you. You see something like his 1975 Amazons vs Supermen and you think that nobody could concoct a movie that made less sense than that one. And then you see his 1980 offering The Beast in Space (La bestia nello spazio), and realise with awe that it actually does make less sense than Amazons vs Supermen.

The Beast in Space is basically one of Brescia’s trademark anarchic space operas, which Lord knows are outlandish enough in themselves, but for some obscure reason he decided to combine it with a kind of pastiche of Walerian Borowczyk’s erotic classic The Beast (La Bête). Now The Beast had certainly ignited controversy upon its release five years before Brescia’s opus, but I’m not sure that the controversy would have attracted the notice of the kinds of audiences that would be likely to want to watch an Alfonso Brescia space opera, Borowczyk’s movie being very much an art-house movie. And as a way of introducing large amounts of sex and nudity into a science fiction film, well frankly I can’t think of a less logical way of doing this since The Beast is essentially an adult fairy tale.

The only possible explanation is that the female star of Borowczyk’s notorious movie, Sirpa Lane, was available and was willing to accept the lead role, so introducing an association with her infamous earlier role could be used as a marketing ploy. The result is bizarre indeed. The parts of the film that have been cribbed from The Beast have absolutely zero connection with the rest of the movie. And I really do mean zero connection.

The plot (if one can use such a term in relation to a Brescia film) is more or less the same as that of his earlier science fiction outings such as Cosmos: War of the Planets and War of the Robots. A dauntless space captain and his fearless crew travel to some distant planet to find something important there (in this case a rare mineral). They battle with hostile spaceships (the same hostile spaceships we saw in the earlier movies), they battle with golden-suited androids wearing odd wigs (the same golden-suited androids wearing odd wigs we saw in War of the Robots), they encounter an all-powerful and malevolent computer (yes, the same one we saw in his earlier movies), and then they return home. The only difference is that this time when they get to the distant planet they participate in an orgy, thus allowing Brescia to add very large quantities of skin and fairly raunchy softcore sex scenes. Why does the orgy take place? No-one knows. Oh, and Sirpa Lane gets to replay her most famous scene from The Beast. How does a member of the spaceship crew manage to get herself raped by a beast drawn partly from Greek myth 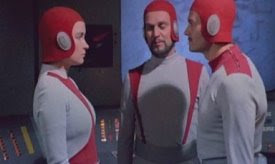 One loves Brescia’s movies for the same reasons one loves Ed Wood’s movies.
Posted by dfordoom at 00:22

It's my opinion something has been lost in translation. In my original review of the fandub 'bootleg' for Mise-en-scene Crypt (archived here: http://sites.google.com/site/miseenscenecrypt/reviews/beast-in-space) I noted that it was virtually impossible to confirm, via regular print resources, that this movie existed. It appears to be the only of Brescia's space operas to never have had a English language release, which makes following the story all the more baffling.

Even now, having been fortunate enough to see the pre-release version on DVDr and compare it to what I recall of the boot and Unrated and X-Rated releases (including outtakes) it's difficult to assess the movie. These are from an Italian print, and I don't speak Italian. Yet even I could detect the subtitles are not entirely accurate. A lot of the dialogue is played for laughs, at least that was how it seemed in the boot, but humor is notoriously difficult to translate.

Then again Brescia's movies are best watched with your brain parked in neutral. Just let them wash over you and cleanse the crazy of the day away. ;-)