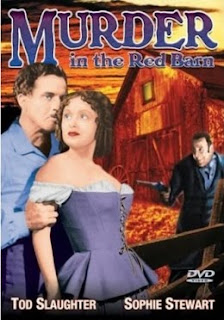 I celebrated the arrival of my Tod Slaughter boxed set by watching Maria Marten, or The Murder in the Red Barn tonight. This 1935 British production is perhaps even closer to pure Victorian melodrama than the 1936 Sweeney Todd, and I loved every minute of it.

It was based loosely (very loosely I suspect) on a celebrated real-life murder case. It became a best-selling 19th century broadsheet and was inevitably adapted as a play. Tod Slaughter himself played the role on stage many times. And he plays the role of the wicked squire in the movie exactly as if he was on stage. None of this nonsense about toning down one’s performance for the screen!

Maria Marten is a farmer’s daughter in love with handsome gypsy Carlos. Naturally her strict father does not approve, but more misfortune is in store for Maria when she attracts the eye of the wicked Squire Corder at a village dance in the Red Barn owned by the squire. He seduces her, and of course she finds herself pregnant. Her father turns her out of the house for disgracing the family name. In desperation she turns to the one man she thinks has the power to help her - Squire Corder. Not surprisingly this does not turn out well for poor Maria.

Now that Maria has mysteriously disappeared her parents are having second thoughts about their behaviour, and start a search for their errant daughter. Squire Corder has tried to point the finger of suspicion at Carlos the gypsy, but he is also busily searching for Maria. He confronts the squire, is shot and wounded, and is pursued to the Red Barn by assorted ge 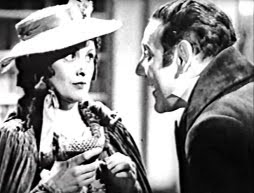 ntry, townspeople, a pack of hounds and a party of Bow Street Runners. It appears that the squire’s plan has worked perfectly, until one of the hounds starts to take an interest in a patch of disturbed earth in the barn.

Eric Portman as Carlos and Sophie Stewart as Maria overact outrageously. In fact the entire cast enters into the melodramatic spirit of the piece. Tod Slaughter naturally dominates the movie, and if you enjoy this kind of extremely hammy acting then you’ll be in bliss. I certainly was.

The plot holds few surprises, but then that’s the whole point of melodrama I suppose. You’re expected to know what’s going to happen next. It adds to the fun, and offers the opportunity for hissing at the dastardly villainy of Squire Corder, and for sympathising with the tragic plight of poor doomed Maria. Considering the unbelievably strict censorship exercised in Britain in the 1930s, especially in respect of horror movies, this film is as gruesome as they were able ti get way with in 1935. Which isn’t very gruesome at all by modern standards, but contemporary audiences u 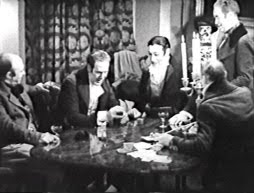 ndoubtedly experienced a few frissons of pure horror. And the ending is suitably grim.

The movie benefits from a very short running time which makes it very fast-paced indeed for a 1930s British crime/horror offering. Despite a limited budget and something of the feel of a filmed play this is a skillfully made and very entertaining picture. You do need to have a taste for this sort of thing of course, and it’s a taste that won’t appeal to everyone. I thoroughly enjoyed it, but I adore deliciously over-ripe acting.

Alpha Video’s DVD presentation is what you expect from that company. The best thing that can be said about it is that it’s quite watchable. The big plus is the pricing - I picked up their six-movie boxed set of Tod Slaughter’s films for a mere eight dollars, and for that price it’s really too good to pass up.
Posted by dfordoom at 00:07