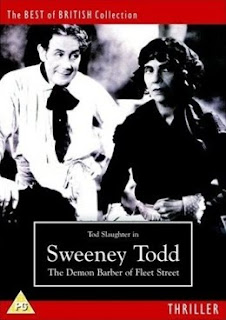 The 1936 British movie Sweeney Todd: The Demon Barber of Fleet Street was the third film adaptation of the Sweeney Todd story, which originated as one of the Victorian “penny dreadfuls” under the title The String of Pearls (which is incidentally a great deal of fun) and later became a hugely successful play.

The plot adheres reasonably closely to the book although it had to be toned down somewhat given the incredibly strict film censorship in Britain at that time. Sweeney Todd has accumulated a fortune by murdering and robbing his customers, in league with Mrs Lovatt who runs the pie shop next door. The fate of the customers, who ended up as the ingredients in the pies, is alluded to but not specifically stated. Todd is also scheming to marry beautiful young Johanna Oakley, whose true love Mark Ingerstreet is trying to make his fortune as a seafarer and trader.

With the aptly named Tod Slaughter in the title role the movie plays the story exactly like a Victorian melodrama, which is of course exactly what it is. Tod Slaughter had played the role on stage literally thousands of times, and he overacts outrageously, and his excessively hammy and stagey perfo 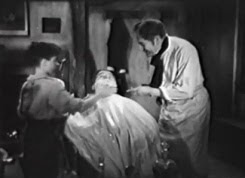 rmance works perfectly. In fact it has quite a bit in common with Tim Burton’s more recent version in that there is not the slightest attempt at realism. The audience is expected to respond the way an audience at a 19th century melodrama would react. The framing story reinforces the sense of unreality, and the feeling that it is all an elaborate joke in which the audience shares.

It’s a low budget movie but it has plenty of energy and it’s well paced for a 1930s British horror film. I found it a lot more entertaining than Burton’s version. Stella Rh 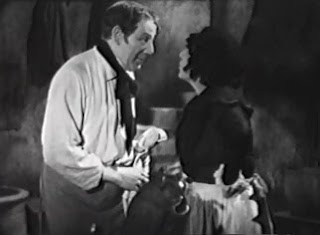 o is suitably creepy as Mrs Lovatt, Bruce Seton is a brave square-jawed hero and Eve Lister makes a likeable and resourceful heroine as Johanna.

Being a 1930s British horror movie there is of course no gore, but there are a few chills, there’s plenty of atmosphere and there’s a good deal of fun to be had.

It’s in the public domain and can be found online. It’s also available as part of the recently released Tod Slaughter DVD boxed set from Alpha
Posted by dfordoom at 21:51