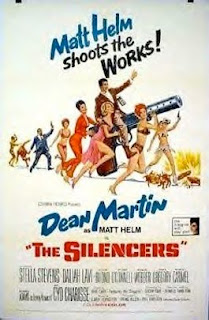 The 60s was the golden age of the spy spoof. There were European spy spoofs and British spy spoofs, and quite a few American attempts as well. The American entries in this genre included the Matt Helm movies, starting with The Silencers in 1966. The Matt Helm films are certainly far from being the best of the breed. If you’re expecting the visual inventiveness of Mario Bava’s Danger: Diabolik or the wit and sheer camp joy of Joseph Losey's Modesty Blaise you're going to be sorely disappointed. The secret to enjoying The Silencers is to set your expectations fairly low. If you do this you’ll find that it has a certain amount of entertainment value. And it definitely has a 1960s time capsule appeal to it. Of course being a major studio production (Columbia in fact) from the mid-60s there’s no actual sex or nudity. But it’s a sexy spy spoof, so it relies on lots of implied nudity, lots of shots of young ladies in bikinis and lingerie, and large amounts of sexual innuendo. These were the days when lingerie-clad young ladies were enough to get young men very hot and bothered. And that in itself gives it a certain charm. The plot won’t take us very long to deal with. An organisation of diabolical criminal masterminds known as the Big O plans to start a nuclear war and then tak 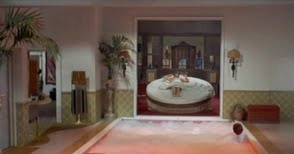 e over when the super-powers have destroyed each other. America’s top secret agent, Matt Helm, is now in retirement, spending his days as a glamour photographer for girlie magazines. He has to be persuaded to come out of retirement since the fate of civilisation depends upon his secret agent skills. He naturally becomes involved with several beautiful young women who are almost certainly spies although whether they’re on the side of the good guys or the bad guys remains in doubt. Matt Helm must foil the Big O’s schemes, whilst hopefully enticing as many as possible of the aforementioned glamorous female spies into his bed. There are of course plenty of s 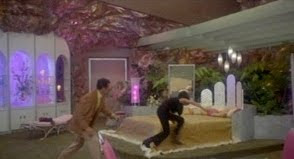 illy but reasonably amusing gadgets. There’s no graphic violence, and not a huge amount of action. Dean Martin was not a bad choice for the role of Matt Helm. He has a knack for making fairly innocuous dialogue sound dirtier than it is, and there’s no danger whatsoever that he’s going to take any of the proceedings seriously. He plays it as pure camp, which is the only way this movie can be played. And he’s sufficiently adept at comedy to make the most out of a not overly inspired script. Stella Stevens and Daliah Lavi provide the glamour. They’re not called on to do a great deal else, but their performances are suitably campy. 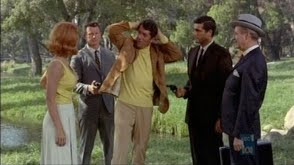 Columbia obviously didn’t spend too much money on this one, since there’s a notable absence of action sequences and special effects. This is strictly guilty pleasure material and I don’t think I could in all honesty recommend that you go out and buy this one. In fact I don’t even know if it’s available on DVD - I caught it on late-night Australian TV. But if you can rent it, or if it turns up on cable, and you’re a fan of 60s spy spoofs, it’s worth a look. It was successful enough to spawn no less than three sequels.
Posted by dfordoom at 20:19

Hey pallie, likes thanks so much for sharin' this review of Matt Helm caper numero uno. This is simply our Dino playin' his oh so cool, hip, and every randy Dino-persona to Dino-perfection. Thanks for liftin' up the name of our Dino and helpin' others to come to know, love, and honor our great man. BTW, all four of the Dino-quartet is avaiable in a set tagged "Matt Helm Lounge" and last I know Amazon had 'em availble for less then $17 smackers....

I am vaguely tempted by the Matt Helm Lounge but The Silencers turned up on late-night TV here in Australia (and on the ABC so it was commercial-free) so I'm hoping they have the rights to the other Matt Helm movies and will show them all eventually.

Hey pallie, likes just to let you know ilovedinomartin has completed our postin' of your four Helmer reviewers....what a stunnin' way of startin' our our month of Dino-amore. Likes hope you will continue to review more of our Dino's big screeen efforts!