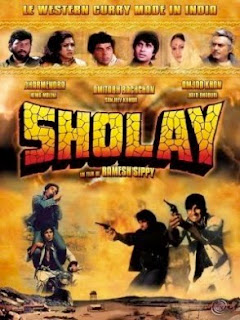 I’m quite fond of spaghetti westerns, and I’m developing a taste for Bollywood movies, so the idea of a “curry western” was something I couldn’t resist. Sholay, released in 1975, is regarded as the first of this genre. It also happens to be the highest grossing Bollywood movie of all time.

If you’re expecting something resembling a spaghetti western you’re in for some major shocks. It’s possibly debatable that it’s even a western at all. It isn’t set in the American West; it’s set in central India. And it’s set in modern times. On the other hand the main plot is a classic western revenge plot and the basic structure of the movie, and more importantly the whole ethos of the film, makes it absolutely a western.

Being a Bollywood movie it naturally has more than just the central revenge plot. There are certain elements that have to be included in any Bollywood film, and this is no exception. There’s singing and dancing, of course. There are lengthy comic interludes. And there has to be a love story. Since this movie has two heroes, it has two love stories. You might think that would make for a fairly long film, and you’d be spot on. Sholay clocks in at no less than 204 minutes.

The major plotline concerns a policeman, known as the Thakur, and two thieves, Veeru and Jai. The policeman captured the two thieves several year earlier. He was bringing them in by train when the train was attacked by bandits. The two thieves offered to help fight off the bandits. They had the opportunity to escape but it would have meant abandoning the wounded police officer. When the Thakur, now retired, finds himself in need of some hired muscle

he remembers the two thieves who fought so bravely and showed such an unexpected sense of honour. They accept the mission he offers them, to bring to justice the notorious bandit Gabbar Singh. The Thakur has a personal score to settle with Gabbar Singh.

Veeru and Jai soon find themselves in a position familiar to any hero of the western genre - the Thakur’s village is being ruthlessly plundered and terrorised by Gabbar Singh’s bandits. In between fighting off bandit attacks and planning the capture of this unpleasant outlaw both thieves find time to fall in love. Jai falls for the Thakur’s widowed daughter-in-law; Veeru loses his heart to a talkative horse-cart driver. The struggle against the bandits takes on the dimensions of a small war and builds to a finale that contains both some expected and some unexpected elements.

If you’re a newcomer to th

e world of Bollywood you might find the extraordinarily long running time rather daunting. Personally I found that the movie had no difficulty keeping me interested but whether you’ll share my experience or not probably depends on how much tolerance you have for the musical interludes and the comic relief. Both are present in very large quantities.

The movie’s two biggest strengths are director Ramesh Sippy’s visual flair and the exceptionally good acting performances. There are some impressive action set-pieces with the opening bandit attack on the train being a highlight. Amjad Khan as Gabbar Singh is one of the great movie villains, a thoroughly menacing character with a taste for rather sadistic murders. It’s an immensely entertaining performance. Amitabh Bachchan, who plays Jai, is one of Bollywood’s superstars and it’s easy to see why. Dharmendra is equally good as Veeru. There’s an obvious Butch Cassidy and the Sundance K 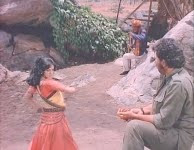 id influence in the relationship between the two loveable rogue thief-heroes.
Hema Malini as Basanti doubles as both the chief source of comic relief and as the love interest for Veeru. She does become somewhat annoying in the former role but her character is gradually developed in more depth and displays considerable courage and resourcefulness. The scene in which she has to dance for Gabbar Singh in order to save Veeru’s life is truly inspired.

Another disquieting habit of this movie, if you’re not used to Bollywood, is the way it constantly and abruptly switches back and forth between gritty drama, comic scenes and musical numbers. Along with the leisurely pacing it’s one of the things that you either learn to accept or you don’t.

This is a big movie in every sense of the word. It’s not going to be for everyone. Personally I loved it.

Eros Entertainment’s DVD release is disappointing. It’s fullframe and the colours are not exactly vibrant, and there are no extras. But it’s the only available DVD of this movie and if you have a taste for Bollywood it’s pretty much a must-buy in spite of those problems.
Posted by dfordoom at 22:06

I've never been big into Indian movies. Actually, I don't think I've ever watched one from start to finish! So many of them do seem to last around 2 to 3 hours and have singing and dance numbers amidst the action. I think I have a book somewhere that has a chapter on Bollywood movies. There's another site I follow, D, that has lots of Indian movies in addition to many other obscure foreign pictures. Die, Danger, Die, Die, Kill! is the name of the site. I'll send you a link if you're interested. Occasionally I will read over some of those write ups just to read about something unusual, but I have yet to embrace Indian cinema.