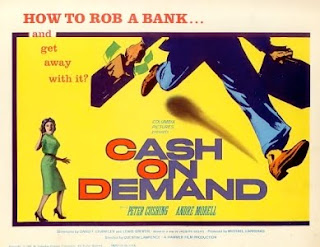 Although made in 1961 and contemporary with Hammer’s psycho-thrillers such as Paranoiac, Cash on Demand is more of a throwback to Hammer’s film noir of the early 50s.

The Haversham branch of the City and Colonial Bank is not a happy place to work, even on Christmas Eve. The manager, Mr Fordyce (Peter Cushing), is humourless, cold, pedantic and unforgiving of even the most trifling errors. His chief clerk, Mr Pearson, is an easy-going chap but Mr Fordyce has it in for him. Possibly because Mr Pearson is so easy-going, and is popular with the staff.

Fordyce prides himself on his efficiency but his natural tendency to grovel to his social superiors puts him in the most difficult position of his life when he agrees to see a certain Colonel Gore-Hepburn (André Morell) in his office. Gore-Hepburn claims to represent 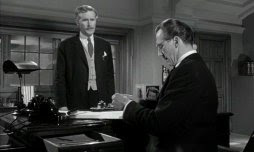 the bank’s insurance company and to be conducting a snap investigation of the bank’s security systems. He sounds upper class so Fordyce is too busy ingratiating himself to bother checking that Gore-Hepburn really is from the insurance company. In fact persuasive colonel is a daring bank robber. He informs Mr Fordyce that his wife and child have been taken hostage and that they will be killed unless he assists in robbing his own bank.

Mr Pearson has already been on the carpet once this morning so he decides that perhaps it might be wise to demonstrate his zeal and efficiency by checking up on the colonel, but the phone system is overloaded with people making Christmas phone calls and the call is delayed. 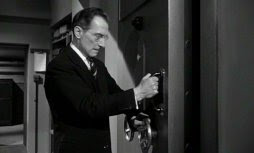 This is a tense and effective thriller that is somewhat let down by a corny and anti-climactic ending. The entire film takes place within the bank and the atmosphere of claustrophobia adds to the tension.

What makes Cash on Demand special is Peter Cushing’s performance. Mr Fordyce starts out as a very unlikeable character indeed but as the movie progresses we slowly start to see that he is really an unhappy and insecure little man. We start to feel sorry for him. He lacks Mr Pearson’s ability to make people like him, and he obviously decided many years earlier that if he couldn’t make people like him he would make them fear him. He’s a typical petty tyrant but Cushing makes him human. 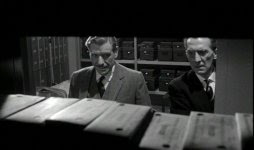 André Morell as Gore-Hepburn and Richard Vernon as Pearson give solid support but it’s Cushing who dominates the film.

It’s unfortunate that the cleverness of the script doesn’t extend to the ending. Apart from being dramatically not very satisfactory it also isn’t consistent with the mood of the rest of the film. But it’s worth seeing just for Cushing.

Interestingly enough the very same basic plot was used for another thriller made the same year in the US, Five Minutes to Live, which is a truly bizarre movie starring Johnny Cash.

Cash on Demand is included in the excellent Hammer Icons of Suspense boxed set.
Posted by dfordoom at 23:36

I reviewed this a while back myself and along with NEVER TAKE CANDY FROM A STRANGER is the highlight of the Icons of Suspense collection. As you rightly point out Peter Cushing is excellent in this.

This one had a peculiarly Dickensian quality for a Hammer film, perhaps because of the ending and the lessons apparently learned by Cushing's character as well as the Christmastime setting. And Icons of Suspense is a great collection from what I've seen of it.

Samuel, you're quite right, it has a weird feeling of being both a pychological suspense thriller and a sentimental Dickens Christmas tale. With a lesser cast it might have been an awful mess but the actors are good enough to just about carry it off. Especially Cushing.

So far I've liked the Icons of Suspense set a lot. These Are the Damned is my favourite, and I thought Stop Me Before I Kill was a pleasant surprise.