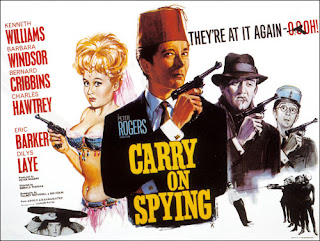 The success of the early James Bond films unleashed a plethora of imitations, blatant rip-offs and spoofs. It was inevitable that there would be a Carry On Spying movie. The good news is that it’s one of the best of the Carry On movies.

Made in 1964, the film sees British Intelligence desperately short of agents. When a top-secret formula is stolen they are left with no choice - they must assign Simkins to the case. Simkins (Kenneth Williams) is generally regarded as their most incompetent agent so to give his mission a better chance of success three 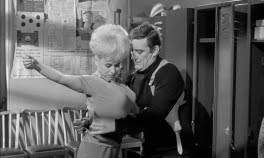 Their search for the missing formula takes them to Vienna and thence to Algiers and they naturally leave behind them a trail of mayhem. Luckily their opponents from the sinister Society for the Total Extinction of Non-Conforming Humans (STENCH) are equally inept. The British do have one big th 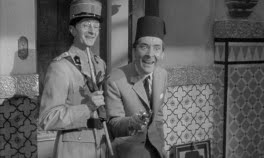 ing going for them - among her other assets Agent Honeybutt has a photographic memory. But will this be enough when they go up against the dreaded chief of STENCH, the mysterious Dr Crow?

It’s classic Carry On silliness, loaded with double entendres but like most of these films it has a certain beguiling innocence about it. It’s good-natured fun, and it can’t even really be accused of sexism. Daphne Honeybutt is probably the least incompetent of the British agents. It’s pleasing to see Barbara Windsor getting more to do than in most of her appearances in these movies. 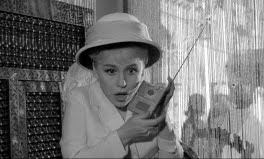 Dr Crow’s secret headquarters is fairly impressive and provides the setting for a great comic/action chase set-piece. Carry On Spying has all the ingredients you expect in a spy spoof movie.

Of course you either like this style of British humour or you don’t. If you do then this is an excellent example of the breed.

The Region 4 DVD has absolutely no extras at all, but the transfer is quite acceptable.
Posted by dfordoom at 22:47