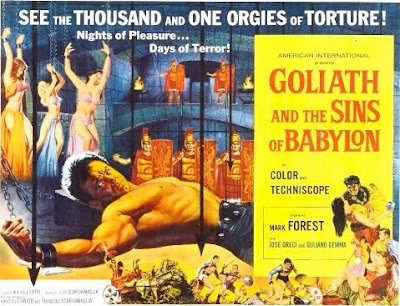 Goliath and the Sins of Babylon (Maciste, l'eroe più grande del mondo) is a rather good example of the peplum genre, and (rather unusually for this genre) with a very satisfactory DVD presentation, from Retromedia.

The people of Neffer were defeated in war by the Babylonians, and have paid a high price for their defeat. Each year they must send thirty of their most beautiful virgins to Babylon as tribute. as you might expect they’re not terribly happy about this situation.

Actually doing something about it is another matter. The young men of Neffer are brave and willing to fight, but as anyone who has ever watched one of these movies knows they wil

l have little chance of success unless the have the services of a bona fide hero. Luckily, just such a hero happens to be available, in the person of Goliath (given the original Italian title of the film it’s pretty obvious that the hero is actually Maciste, but one muscle-bound hero is as good as another).

Director Michele Lupo provides us with some impressive action sequences, and we also have a worthy action hero star in the person of Mark Forest.

The sea battle scenes and the chariot races are quite spectacular. This is a movie that certainly looks more expensive than it was.

Most importantly, the movie is presented in the correct Techniscope 2.35:1 aspect ratio. It’s not a perfect print, but it’s pretty good, and definitely qualifies as one of the best DVD transfers I’ve seen in

The English dubbed soundtrack is acceptable if not fantastic.

Goliath and the Sins of Babylon is enormous fun and is really a must-buy if you’re a fan of this genre.
Posted by dfordoom at 23:32

Great movie this one and one of the best! If you can't get into this one, you're likely not to like this genre at all, I'd say. Lupo's unrelated gladiator trilogy with Roger Browne are also highly recommended. The Italian DVD for GOLIATH is a little over 5 minutes longer if I remember right. I'll have to check again.