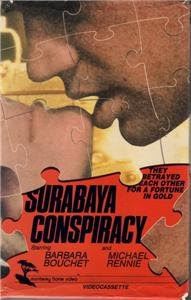 I bought Code Red’s double-feature DVD Stoney/The Killer Likes Candy on the assumption that these were eurospy flicks, a genre of which I’m very fond. In fact Stoney (AKA Surabaya Conspiracy) hails from the Philippines and isn’t really a spy movie. It’s still worth a look.

Made in 1969, it’s more of a heist movie but with a background of international intrigue that makes it at the very least a first cousin of the spy thriller.

The details of the plot are somewhat murky and convoluted and there are so many players all trying to double-cross one another that it’s easy to lose track of exactly where everyone fits in.

Harvey Ward (Michael Rennie) is a businessman with various interests in the East, almost all of them illegal. Gunrunning is one of his businesses. Now he’s got wind of a possible fortune in buried treasure. During the war the Japanese had looted the vaults of various Dutch banks in Indonesia (or the Dutch East Indies as it then was). A Japanese general serving a long prison sentence for war crimes has revealed the hiding place of the loot. It’s an enormous fortune, and Harvey Ward wants it.

ed so he sends his mistress Irene Stone (known to her friends as Stoney) to make arrangements to have this loot smuggled out of the Indonesian city of Surabaya. Her qualifications for the mission seem to be that she’s extremely beautiful and thus finds it fairly easy to persuade men to do what she wants them to do, and her ethics are exceptionally flexible.

Steven Blessing, who appears to be a kind of freelance adventurer and who happens to be an old acquaintance of Stoney’s, is also on the trail of the treasure. Other players include Indonesian government officials and a guerilla army. Things have the potential to get messy, and that’s exactly what happens. Much mayhem ensues.

Before we get to the mayhem we get the sex and the glamour. Stoney has b

een negotiating with a very senior Indonesian official who introduces her to the glamorous side of life in Surabaya. He also hopes to make her his mistress. Stoney is more interested in bedding the hunky Steven Blessing. These are characters who find it easy to combine the pleasures of flirtation with the fine art of the double-cross.

Once the heist is under way the action starts and it’s fairly relentless. The body count is prodigious. The movie was morally pretty dark to begin with and it gets steadily more cynical as it goes.

Mike Preston plays Steven Blessing and while he’s not the world’s greatest actor he’s competent enough. He doesn’t have the charm you e

xpect of a protagonist in a movie of this sort but that makes him slightly more interesting. Whether he’s the good guy or the bad guy is a moot point. It depends on who’s paying him. But he’s the closest the movie has to a hero. He does have some redeeming features.

The movie’s biggest asset is Barbara Bouchet as Stoney. Apart from adding considerable glamour she gives a nicely cynical performance with some amusing tongue-in-cheek moments. Some viewers might also be interested in the fact that she doesn’t keep her clothes on for the whole film.

Technically it’s surprisingly good given that it was presumably m

ade on a shoestring budget. This was Wray Davis’s only directing credit but he does a reasonable job.

If you’re prepared to make allowances for this being a very cheap movie trying desperately to jump on any bandwagon that happened to be passing then it’s actually fairly entertaining.

There’s some print damage but on the whole (considering the obscurity of the movie) the picture quality is quite acceptable, and it is in the correct 2.35:1 aspect ratio.
Posted by dfordoom at 00:45