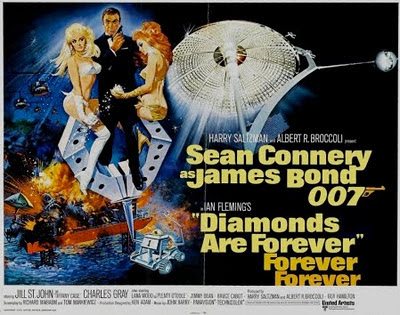 Diamonds Are Forever was the seventh Bond film, and the last official Bond film to star Sean Connery. It marked a definite move towards the camp sensibility that would come to dominate the series in the Roger Moore era.

Connery had very little interest in doing Bond movies by this time, but with George Lazenby unwilling to go on with the series after On Her Majesty’s Secret Service the producers offered Connery a great deal of money and he reluctantly agreed to return to the role. They had apparently been considering John Gavin, which would have been a spectacularly bad casting decision.

Diamonds Are Forever is based very very loosely on the fourth of Ian Fleming’s Bond novels. The movie opens with Bond killing Blofeld, but of course nobody is going to believe that such a splendid villain is really going to be killed off. With the threat from SPECTRE apparently neutralised Bond finds himself assigned to w

hat seems to be a fairly routine case, involving diamond smuggling on a large scale.

Bond assumes he’s going to be sent to South Africa but in fact he ends up in Las Vegas where he has to make contact with the appropriately named Tiffany Case (Jill St John). He uncovers a mystery involving the disappearance of billionaire casino owner Willard Whyte and it soon becomes obvious that more than diamond smuggling is at stake.

e that Telly Savalas brought to the role in On Her Majesty’s Secret Service. Jill St John and Lana Wood (as the wonderfully named Plenty O’Toole) provide the requisite glamour. Putter Smith and Bruce Glover are fun as the sinister gay assassins Mr Kidd and Mr Wint.

Connery may not have been enthusiastic about taking the role but there are no problems with his performance.

any being chased through the streets of Las Vegas in a bright-red Ford Mustang). The special effects in the climactic scenes have been much criticised but the main problem is that an oil rig is not really an exciting enough locale for the climax to a Bond movie.

th its mix of glamour, sleaze, excess and surreal extravagance. The circus in a casino is a definite highlight. The desperate fight in a tiny elevator cage is equally memorable, one of two very impressive fight scenes (the other being Bond’s fight with the two female gymnasts)

I have a soft spot for Diamonds Are Forever since it was the first Bond movie I ever saw. It still holds up rather well. Highly entertaining if occasionally silly fun.
Posted by dfordoom at 16:04

One of my favorites as well. I remember watching this one a lot on the ABC Sunday night movie. Seems as though ABC aired it more than the other Bond movies. A great part of growing up.