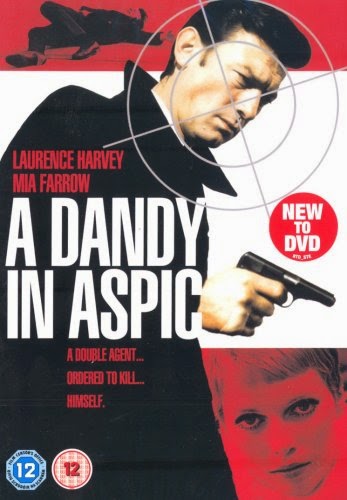 Spy movies were all the rage in the 1960s. In tone they ranged from dark, brooding and tragic all the way to outrageous light-hearted silliness. It was the success of the first Bond film, Dr No, in 1962 that really kicked the spy genre into high gear and established the essential truth that whatever the mood a spy film needed to be stylish. Of course Hitchcock  had already been making stylish spy movies for years and at the tail end of the 50s had had one of his biggest hits with North by Northwest but after Dr No spy movies became a positive craze. A Dandy in Aspic was Anthony Mann’s first attempt at the genre and it would prove to be his last film.

Alexander Eberlin (Laurence Harvey) is a British spy. Only he isn’t really Alexander Eberlin. His real name is Krasnevin and he is actually a Soviet spy. He’s a double agent but his loyalty is to the Russians, not surprising since he is a Russian. Now the British have handed him a rather awkward assignment. They want him to kill a top Russian agent, a chap by the name of Krasnevin. He himself is the man he has been ordered to kill.

It’s actually even more complicated than that. The British of course don’t know that Eberlin is Krasnevin.

Eberlin/Krasnevin’s impossible task is made even more impossible when Gatiss (Tom Courtenay) is assigned to help him on this mission. He hates Gatiss and the feeling is mutual. Gatiss is cold-blooded and very very efficient. He enjoys killing.

To make a difficult situation even worse Eberlin/Krasnevin has met a bright, breezy and rather eccentric English girl named Caroline (Mia Farrow). The last thing he needs right now is a romantic entanglement but that’s what he’s going to get. Caroline has no idea what she is getting involved in although she’s crazy enough that she probably wouldn’t care anyway.

An even bigger problem for Eberlin/Krasnevin is that he wants to go home. Home to Russia. He is tired of being a spy, tired of having no real identity, tired of deception and tired of killing. He is a Russian and Russia is home. The Russians however do not want him to come home - he is too valuable to them where he is. When he is sent to West Berlin he thinks his opportunity has come. Everyone else is trying to escape from East Berlin. He is trying to escape to East Berlin.

Sadly Anthony Mann died during the making of the film. Laurence Harvey took over as director (having already had some experience as a director). Harvey stated at the time that his aim was to complete the film in Mann’s style without intruding any of his own style into it. It’s difficult to say how completely he succeeded since the movie was in any case a radical departure from Mann’s own previous style.

The film was not well received at the time and is generally dismissed as an unfortunate end to the career of a great director. It is a quirky film but quirky spy movies tended to do very well in the 60s. A Dandy in Aspic bears little resemblance to the Bond movies, belonging more to the dark and brooding school of spy film-making. Dark and brooding, but very stylish. In that respect it’s not dissimilar to the Harry Palmer movies such as The Ipcress File. Given that The Ipcress File did pretty well and has since gained a major cult following it’s difficult to understand why A Dandy in Aspic failed and has languished in obscurity ever since.

There’s not a great deal of action but other character and atmosphere-driven spy thrillers were successful at that time.

The film’s failure cannot be attributed to the cast. Laurence Harvey is perfect for the role of the embittered and desperate double agent. It’s a very low-key performance but given that he’s playing a man with no coherent sense of identity that works quite well. It also helps in not making the character too sympathetic - he is after a ruthless spy and a pitiless assassin. Tom Courtenay is surprisingly chilling as the ice-cold Gatiss, and manages to make him more than just a killing machine. We get a sense that he does have emotions but they’re well and truly buried and they’re seething away somewhere deep inside him. Mia Farrow is ditzy but appealing. The strong supporting cast includes such fine British character actors as Harry Andrews, Geoffrey Bayldon and Norman Bird. Look out for comic Peter Cook as a lecherous British spy.

Derek Marlowe’s screenplay was adapted from his own novel. It has plenty of twists and turns and plenty of the kind of cynicism that went down so well in the 60s. Having a Russian spy as the hero was an interesting twist.

A Dandy in Aspic is a tense stylish spy thriller which deserves to be rediscovered. Highly recommended.
Posted by dfordoom at 14:02

Although not the greatest spy movie of all time, this was so much better than I expected. Some of the casting really is imaginative. My only quibble would be that it's sometimes a lot bleaker and grungier than you get even in downbeat spy movies, and other times it's a bit too 'Technicolour', especially with some of the location filming.

Overall, it works very well, and it's a very clever idea. One of those films that needs to be rediscovered!

A very interesting film, much better than I expected, although not really an all-out classic. The actors, some of whom are interesting pieces of casting, are never less than competent, but, apart from the leads, don't really deliver great work - Peter Cook gives a very watchable performance, but it's always a performance (which actually helps the film in a way). It's a pretty good adaptation of the book - in fact, in a few places, the film improves on the book, or at least makes changes that suit the big screen. It doesn't make the mistake of throwing out all the things that made the story interesting in the first place.

I found the production style a little off at times - there are a couple of scenes that are really downbeat, and almost kitchen-sink; yet some of the location work in Germany is very 'Technicolour', if you know what I mean.

Overall, recommended as ripe for re-discovery