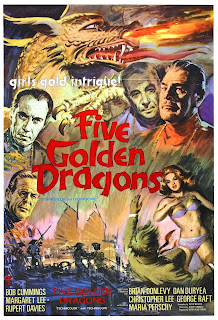 Five Golden Dragons, released in 1967, was produced and written by low-budget movie legend Harry Alan Towers so you know it’s not going to be Citizen Kane but you can pretty confident it will be enjoyable. Plus Christopher Lee is in it.

A man is murdered by being tossed off a hotel balcony in Hong Kong, leaving behind a cryptic clue - a note on which is written Five Golden Dragons. The note is addressed to Bob Mitchell (Robert Cummings) so naturally the Hong Kong Police are now very interested in Bob Mitchell. Others have now become interested in Mitchell as well, including the sinister Gert (Klaus Kinski).

Mitchell is a harmless middle-aged American playboy whose main interest in life is skirt-chasing. He has no idea why suddenly people are trying to kill him. As a result of his skirt-chasing attempts he has become mixed up with two glamorous young women, Margret (Maria Perschy) and her sister Ingrid (Maria Rohm, the real-life wife of Harry Alan Towers).

Margret seems remarkably nervous about something. It turns out she has good reason to be.

When the dead bodies start to accumulate around him Bob Mitchell gets kind of nervous as well.

Commissioner Sanders (Rupert Davies) and Inspector Chiao (Roy Chiao) know about the Five Golden Dragons and something of their activities but the identities of the dragons are unknown. Even to each other. The dragons are planning to meet face-to-face for the first time so something big is going on. Anyone who has happened to find out too much about the dragons, or is suspected to know too much, is in danger. That includes Bob Mitchell and his two young lady friends.

Mitchell does a bit of sleuthing himself, with satisfies some of his curiosity but may involve some risks to his future health. He’s just a businessman with an eye for the ladies but he gets annoyed when people like Gert threaten women. He takes a dislike to the Five Golden Dragons but whether he’ll end up being a hindrance or a help to the place remains to be seen.

The cast is one of the film’s strengths. Robert Cummings does a fine job as the poor schmuck who is in way over his head but is too stubborn to admit it. He’s a likeable protagonist.

The cast includes some very lovely ladies, including Margaret Lee as night-club singer Magda who may or may not be mixed up with the Five Golden Dragons, and a charming Japanese pop singer, Yukari Itô. There’re a couple of musical interludes, always a good way to pad out a low-budget movie but the songs are not too bad. Maria Rohm makes a good damsel in distress, just the sort of girl to awaken Bob Mitchell’s latent chivalrous impulses.

And the supporting players include Christopher Lee, Dan Duryea and George Raft. Plus Klaus Kinski being sinister. For a cheap movie this one is almost overloaded with acting talent.

Of course with a budget which was a tiny fraction of the budget of a Bond movie you can’t expect spectacular action set-pieces but this movie proves that if you have a bit of imagination you can still do reasonably effective action scenes. And some of the action scenes might not be epic in scale but they do have a certain wit. I liked the slow-motion boat chase. And the rickshaw chase.

There’s some great location shooting in Hong Kong. The sets are pretty effective. There’s the Blue World night-club, with its maze of secret passageways. And the little golden pagoda is a nice touch.

Director Jeremy Summers enjoyed more success as a television rather than a film director but in 1967 and 1968 he directed four features for Harry Alan Towers, and even managed to get paid for them (Towers being notorious for owing people money). Towers wrote the script for Five Golden Dragons (under his usual nom-de-plume Peter Welbeck). Whatever one thinks of his business ethics Towers had a pretty good instinct for what worked in low-budget film-making.

Five Golden Dragons is lightweight but enjoyable. Recommended.
Posted by dfordoom at 21:54

Certainly an example that others could learn from about low-budget film-making!

One to sit back and enjoy the ride, although for me it sagged a bit in the middle - there were too many songs in a row in the night-club, although each one is good on its own. It doesn't make much sense, and there are some plot holes that are so big, they're almost funny - one character pretty much disappears for almost half of the film.

But it's beautifully made, for the money - I did like the slow boat chase. And what a cast - even though most are guest stars (I think I'd have liked this more if they were scattered throughout the film). Turns out Rupert Davies's Chinese assistant is the nightclub owner at the beginning of Indiana Jones and the Temple of Doom - I knew I recognised the voice, as well as the face ... although it's a shame Kinski didn't do his own voice for the English dub. He's not the only German actor I recognise either ...

I did like it - the lead's good, which always helps. I've got a German Blu Ray of this, which includes an interview with Harry Alan Towers, which I haven't watched yet, but am looking forward to!