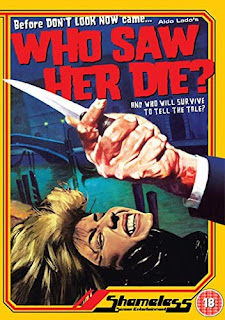 Who Saw Her Die? (Chi l'ha vista morire?) is a 1972 giallo directed by Aldo Lado and watching this movie it’s impossible not to be reminded of Nicolas Roeg’s Don’t Look Now although Lado’s film predates Roeg’s by a year. There are a lot similarities. Both are set in Venice. Both films open with the death of a child. Both films involve a killer stalking Venice. Both have as the lead character an arty expatriate living in Venice. In both cases the estrangement between a husband a wife plays a key rôle. In both cases the parents’ feelings of guilt are crucial. Both movies have a sense of subtle menace and impending danger.

There are however plenty of very significant differences as well. The supernatural (or paranormal) element in Don’t Look Now is missing in Aldo’s movie. Who Saw Her Die? Is perhaps more of a conventional thriller, albeit a clever and complex one with plenty of psychological depth.

The movie opens with the murder of a child in France in 1968. It the jumps forward to 1972, to Venice. Franco Serpieri (George Lazenby) is a sculptor who has relocated to Venice from London. His wife Elizabeth (Anita Strindberg) has remained in London with their daughter Roberta (Nicoletta Elmi).

Roberta has come to visit her father. Whatever problems there might be between husband and wife Franco and his daughter are clearly devoted to each other.

That opening murder sequence has put the audience on notice that more murders are likely. We have the sense of someone watching although we’re not entirely certain who is being watched.
Another murder does follow, and we discover that there was a similar murder in Venice a year earlier. Is it a crazed lone killer or some kind of conspiracy among the rich and decadent? Even more murders follow as the killer (or killers) tries to cover his tracks.
By giallo standards there’s very little gore, and only a moderate amount of sex and nudity. Lado pulls off some fine set-pieces and some effective suspense. It’s a stylish film that makes good use of the Venice locations but it’s focused more on the effects of the murders on others than on showing us gruesome murders.

The subject matter, violence against children, is obviously one that needs to be handled carefully and it is. It never feels cheap or exploitative.
This is a very dark film with an all-pervading atmosphere of moral corruption. There are plenty of characters with dirty secrets to hide and plenty of sinister figures wandering about in the shadows.
The ending is clearcut in some ways but psychologically ambiguous. There are some traumas from which people never really recover. And has the corruption really been rooted out? Can evil ever be entirely rooted out?
George Lazenby (whose career wasn’t exactly prospering after his brief brush with stardom as James Bond in On Her Majesty’s Secret Service) does a very fine job as Franco, playing him as distraught and obsessed without going too far over the top. He’s a man desperately trying not to fall apart.

The striking Anita Strindberg is very good also as the wife trying to deal with some very mixed emotions. She appeared in a couple of other notable giallos including Your Vice Is a Locked Room and Only I Have the Key and The Case of the Scorpion’s Tail. There are solid performances by the supporting players as well.
Ennio Morricone's brilliant and moody score (with lots of choral work) deserves special mention.
It’s the Venice setting that makes this movie special (along with some great cinematography). This is not the Venice the tourists see. It’s a fog-shrouded city of decadence and menace. It probably helps that Venice is director Aldo Lado’s home town.
Lado made a couple of other giallos around this time - Short Night of Glass Dolls (which I’ll be reviewing in the near future) and the somewhat controversial Night Train Murders.

The Shameless Region 2 DVD (which is the version I saw) is uncut and it’s a good transfer. There’s now a Blu-Ray release from Arrow which, if it’s up to their usual standards, would obviously be the one to get.
It has to be said that this film is not quite in the same league as Don’t Look Now. It’s also not quite the same sort of film. Judged on its own merits though it’s a very effective moody low-key giallo.
Who Saw Her Die? Is highly recommended.
Posted by dfordoom at 23:39