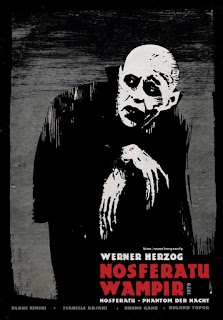 Werner Herzog’s 1979 Nosferatu: Phantom der Nacht is very much his homage to F.W. Murnau’s 1922 classic Nosferatu, eine Symphonie des Grauens. Which was of course an unauthorised adaptation of Bram Stoker’s Dracula. Herzog was however not interested in remaking Murnau’s film. It merely serves as a kind of point of departure. The tone of Herzog’s movie is very different. Much more melancholy and tragic. And Herzog departs from both Murnau’s and Stoker’s stories in major ways.

There’s presumably no need to rehash the plot of Dracula so I’ll simply mention the ways in which the movie’s plot differs from the novel. In Herzog’s movie it is Renfield (already a servant of Dracula) who sends Jonathan Harker (Bruno Ganz) to Translyvania to arrange for the lease of a house. Jonathan’s wife is Lucy (Isabelle Adjani). Joanathan falls victim to Dracula and returns home a broken man, driven only by his awareness of the danger to Lucy. By the time he reaches home his mind has gone and he no longer recognises her.

His home (which is Dracula’s destination) is in a northern European city, not London.

Dr Van Helsing is the town physician but he’s doddering and ineffectual.

Dracula’s arrival brings plague with it, with the plague clearly being engineered by Dracula (or perhaps plague simply follows vampires). It is the plague that is mostly responsible for spreading fear and despair and social collapse, not Dracula. The plague claims a lot more victims than Dracula and the townspeople are not even aware that there is a vampire in their midst.

The landscape through which Jonathan travels on his way to Dracula’s castle has very much the feel of a Caspar David Friedrich painting and Herzog’s compositions enhance that feel. Man alone in the wilderness, with nature menacing in its remorseless savage beauty. 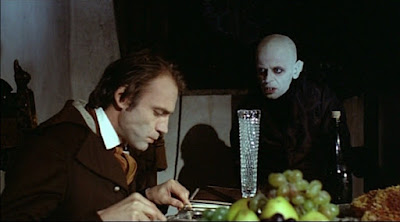 The landscapes are romantic, in the sense of having the bleakness and cruel beauty that appealed to the Romantic Movement. Wild mountain seascapes, mist-shrouded seascapes in which the sea is more grey than blue, desolate beaches. Although it should be borne in mind that Herzog claims to have no interest in the Romantics and feels more in tune with the late Middle Ages. The landscapes in this movie are glowering and oppressive. The interiors are claustrophobic and stifling. 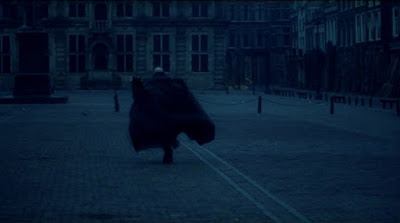 A major challenge with a vampire movie is to persuade the viewer to identify with the vampire hunters rather than the vampire. Since Christopher Lee’s first appearance as Dracula vampires had seemed sexy and glamorous. Of course that’s partly an inherent feature of the vampire. The vampire became a popular figure in western culture at the same time as the Byronic hero. That’s no coincidence. Both were creations of the Romanic Movement. The Byronic hero was a sexual outlaw, as was the vampire (the erotic overtones were present in vampire fiction at least as early as 1797 when Coleridge wrote his poem Christabel. Vampires and Byronic heroes were outsiders, defying the rules of conventional society. Vampire hunters by contrast have always seemed to be humourless enforcers of the social rules.

Herzog avoids this problem (as Murnau had avoided it in 1922) by making his vampire truly monstrous but in an ugly repulsive way. A female viewer might have been quite willing to have Christopher Lee bite her but she was hardly likely to fantasise about being ravished by Klaus Kinski’s Dracula. 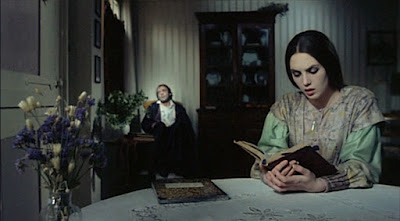 The problem of unsympathetic vampire hunters is solved by having Lucy the chief vampire hunter. But if you think that means that this is a feminist girlpower movie think again. What gives Lucy her power is her faith, her purity and her love for her husband. Lucy is a woman of the 19th century. Her ambition in life is to be a good wife. She becomes Dracula’s chief opponent because there is no-one else to do the job, and because she has studied up on vampires and she knows that a pure-hearted woman is a dangerous opponent for a vampire. The men are incapable of combating Dracula effectively not because they are weak or stupid but because they lack a woman’s simple faith.

A major theme of the novel is the clash between the decadent aristocracy (Dracula) and the rising middle class. Another major theme is the clash between science and superstition, with Stoker obviously on the side of science. Van Helsing uses religious symbols to combat Dracula but he uses science and technology as well. In Herzog’s movie science (as represented by Dr Van Helsing) is ineffectual. The only hope of defeating the vampire is Lucy’s simple faith. 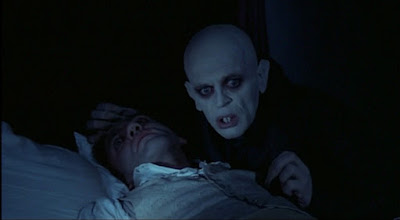 Kinski’s Dracula is sympathetic in the sense of being a tragic figure. He knows he is cut off from everything that a human being takes for granted, including both death and love. He is tragic, but he is not a figure with whom an audience is going to identify. We want to see him destroyed, as much for his sake as for everyone else’s. It is one of the very rare vampire movies in which we actually buy the idea that the destruction of the vampire will be a blessing for him.

What’s immediately apparent is that his movie bears no similarity in theme, style or one to any other 1970s vampire movie. This is not the cozy central Europe of Hammer horror. There’s virtually no trace of the eroticism of 1970s vampire movies. There’s no comic relief. There’s no glamour. It’s interesting that Herzog has never seen the Bela Lugosi version of Dracula. In fact he seems to have seen very few vampire movies which is probably why his film seems so dazzlingly original.

Herzog’s movie has a strange air of unreality. The movie does not take place in our world. It takes place in a kind of dream world, or nightmare world.

The Shout! Factory Blu-Ray offers a nice transfer. There are two audio commentaries featuring Herzog, one in English and one in German with subtitles. Both are worthwhile.

It's been ages since I've seen this film. As you point out, it's certainly a far cry from the Hammer Draculas that preceded it, with the scholarly/scientific vampire hunters failing and simple faith winning the day. Kudos to Shout Factory for doing a decent Blu-ray release. I see that it's also making the rounds of various streaming services like IMDb-TV and Tubi, as is its companion, Nosferatu in Venice.

Brian Schuck said...
I see that it's also making the rounds of various streaming services like IMDb-TV and Tubi, as is its companion, Nosferatu in Venice.

I'll be posting a review of Nosferatu in Venice very soon.