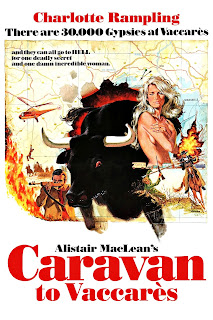 Caravan to Vaccarès is a 1974 adaptation of Alistair MacLean’s extremely good 1970 novel of the same name. There are a few changes compared to the novel, with the protagonist becoming an American for starters.

This is one of no less than three MacLean adaptations directed by Geoffrey Reeve, including the very underrated Puppet on a Chain (1971).

Bowman (David Birney) is in the Camargue in southern France to do a job. He has no idea what the job entails but the money sounds good. He picks up a pretty blonde hitchhiker. She’s a photographer and she’s in the Camargue for the annual gypsy festival, which is a very big deal. Her name is Lila (and she’s played by Charlotte Rampling).

Bowman and Lila stop to offer help after what seems a minot car accident (but we the audience know it was no accident). Lila naturally starts taking pictures because that’s what she does. Someone else has stopped at the scene of the accident and he tries to grab Lila’s camera. He’s a pretty formidable-looking hoodlum and he’s carrying a gun but Bowman turns out to be a guy who can deal with hoods with guns who menace pretty blondes.

Lila has no place to stay so Bowman suggests she stay at his hotel. It’s no problem for Bowman because the fabulously rich Duc de Croyter is picking up the tab. But it turns out it could be a problem when de Croyter denies having any knowledge of anyone called Bowman. By now we’re starting to suspect that nothing is quite what it appears to be.

Bowman and Lila find themselves in the middle of a very complex and dangerous situation. Bowman is supposed to smuggle a mysterious Hungarian out of the country. Someone tries to kill Bowman. A gypsy is killed. More corpses start to accumulate.

Bowman is not happy. He thinks he’s working for people who are playing a very dangerous game but he also thinks that they don’t know what they’re doing. He’s not at all convinced that he’s been told the truth about the job for which he’s been hired.

Lila doesn’t care much about Hungarians but she’s involved whether she likes it or not.

Zuger is a scientist who’s come up with something that everybody wants. It’s a classic McGuffin and since the secret is inside the Hungarian’s head then he himself is the McGuffin. Alistair MacLean was famous for focusing very much on the action and the plotting without getting distracted by sex and romance. The movie also sticks to that formula. There’s no sexual or romantic tension between Bowman and Lila. This is perhaps a weakness given that Lila is played by Charlotte Rampling who could certainly provide sexual heat when needed.

I don’t think I’ve ever seen David Birney before but he makes a good wry sceptical reluctant MacLean hero. He’s likeable and he handles the action scenes well. Rampling is very good but her character is underwritten. Michel Lonsdale is excellent as the ambiguous de Croyter and there are some very sinister villains and heavies.

Geoffrey Reeve only directed a handful of films but he does a very fine job here. The action scenes are skilfully directed, clever and imaginative. He makes excellent use of the unusual setting.

There’s plenty of bloodshed but none of is graphic and there’s zero nudity and sex (despite what the poster would lead you to believe).

Scorpion Releasing have put this movie out on both Blu-Ray and DVD. The transfer is excellent. The only extra is an interview with David Birney who has very fond memories of the making of the movie.

Caravan to Vaccarès is a hugely enjoyable well-crafted thriller that doesn’t get much recognition. Highly recommended.

Reeve’s Puppet on a Chain also is well worth seeing and also features great action sequences (including the best movie boat chase ever).

I've never seen this, or even read the book - just never got round to either - but based on your review, I'll definitely check out both.

I looked David Birney up and instantly recognised the face. He was the lead in an entertainingly bad 70s British film called Trial By Combat, with John Mills, Donald Pleasance and (in flashbacks) Peter Cushing, which was on TV so many times that he became one of those actors that you think you've seen more often than you have.

tom j jones said...
I've never seen this, or even read the book - just never got round to either - but based on your review, I'll definitely check out both.


Caravan to Vaccarès is a movie I'd never even heard of until very recently. It seemed to vanish into obscurity after its initial release.

Was Alister Maclean not the Stephen King of his day in terms of “let’s by the rights to that books and adapt it!”

I love all those smaller ones that I think people have forgotten about. Bear Island. Puppet on a String. Have you seen Fear is the Key? It’s great! Oh I forgot he wrote the source material for that mystery/Western set on a train with Bronson.

Anonymous said...
I love all those smaller ones that I think people have forgotten about. Bear Island. Puppet on a String. Have you seen Fear is the Key?

Fear is the Key is a terrific movie. And yes, Bear Island
And Puppet on a Chain are excellent. I've reviewed all those movies here.

he wrote the source material for that mystery/Western set on a train with Bronson.

Breakheart Pass. Quite a god movie. I've reviewed that one as well.

David Birney is one of those actors that I feel I saw constantly at one time but I'd be hard pressed to now name one of his films without checking his filmography. (OK, John Carpenter's SOMEONE'S WATCHING ME does come to mind.)

Holger, I've never seen SOMEONE'S WATCHING ME. Is it worth seeking out?

Oh, absolutely well worth checking out. It's a great TV movie and always gets forgotten about in the Carpenter canon.

In that case SOMEONE'S WATCHING ME is definitely going to be added to my shopping list.

I've seen most of Carpenter's movies but I have missed a few. I haven't seen anything of his after GHOSTS OF MARS.