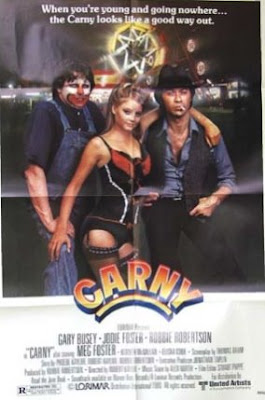 Not the sort of movie I usually post about here, but Carny is a quirky little movie that I'm rather fond of. This is one those movies that takes an outrageously hackneyed idea and somehow makes it work. Jodie Foster is Donna, a small-town girl working as a waitress who is desperate to escape, to anywhere at all as long as it isn’t the small town she grew up in. When a travelling carnival comes to town, and one of the carnies takes a shine to her, she sees her chance and she grabs it.

The guy she hooks up with is Frankie (Gary Busey). His job is to dress as a clown and sit in a cage yelling abuse at the marks, taunting them so they will pay to throw balls at a target. If they hit the target, he gets dunked in a pail of water. His partner is a guy called Patch (musician Robbie Robertson from The Band in one of his very few acting roles). They share a trailer, and a friendship, and pretty soon they’re sharing Donna’s sexual favours as well. Meanwhile Donna has to find a way to earn her keep in the carnival. She tries working in the strip show, but with somewhat disastrous consequences, before finally finding her niche in a rather odd sideshow that involves pulling strings to in prizes.

There really isn’t that much of a plot to the movie, and even such plot elements as there are don’t really go anywhere. That actually turns out to be an unexpected strength of the movie, since after all that’s the carny life - always traveling without going anywhere in particular. With not much plot the emphasis has to be on character and atmosphere, and it scores highly in those areas. It seem to have been something of a personal project for Robbie Robertson, since he is credited as co-writer and co-producer as well as playing one of the leads - I guess the life of the traveling carnival has quite a bit in common with life on the road in a rock’n’roll band.

Director Robert Kaylor is mostly content to let his actors carry the movie, and fortunately his three leads are more than equal to the task. Robbie Robertson and Gary Busey have a wonderful rapport. The 17-year-old Jodie Foster, with more than a dozen movies and an Oscar nomination already behind her, has more than enough experience to handle the role of Donna. All three main characters are complex, with plenty of human weaknesses balanced with genuine warmth. Th 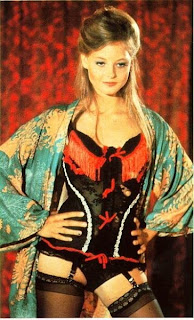 e supporting cast is a mix of amateur actors and seasoned professionals like Elisha Cook Jr, and they all do a fine job.

Carny walks a fine line between excessive sentimentality and excessive cynicism, and does so successfully. It resists the obvious temptations offered by the romantic triangle plot, and it resists the temptation to tie up plot strands neatly. Like the carny life, it’s ambiguous but rich in nuance and filled with the vitality of the life of those who choose this outsider existence.

As far as I know it’s not yet available on DVD, although there are rumours of an upcoming Region 1 release. This movie is an absolute must for Jodie Foster fans, being her first major triumph as an adult actress. An exceptionally interesting and slightly offbeat movie, highly recommended.
Posted by dfordoom at 11:12

I've always thought that Jodie Foster's strength as an actress was her ability to play slightly odd quirky characters in odd quirky movies. It's a pity she doesn't seem to make movies like Carny any more.