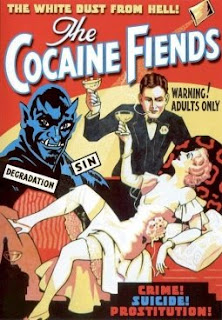 The Cocaine Fiends (originally released as The Pace That Kills) was made in 1935 by Willis Kent Productions, one of the main producers of exploitation movies at that period. It’s clearly an attempt to capitalise on the growing drug hysteria in the US at that time.

Jane Bradford is a sweet innocent country girl lured to the big city by a smooth-talking Lothario. He promises to marry her, and he offers her a wonderful cure for her headaches. He has these special headache powders, and after she takes one her headache goes right away - in fact she feels just swell! But of course once a good girl from the country makes the fateful decision to go to the city she’s already taken the first steps on the road to degradation and ruin. Sure enough, once he gets her there he doesn’t marry her. He does keep her supplied with headache powders though.

By the time she realises that his headache cures are actually dope its too late - she’s hooked! And pretty soon he has her working as a prostitute to support her habit. Meanwhile her brother Eddie has gone to the big city as well, to look for his sister. He has a job at a drive-in fast food outlet, and he’s met a real nice girl. Unfortunately it seems that headaches run in the family, but luckily his new friend has these terrific headache powders, and pretty soon he’s feeling just swell again.

Naturally it isn’t long before Eddie and his friend lose their jobs, because that’s what happens when you’re a coke addict. The plot becomes increasingly tortuous, and there’s a sub-plot involving a nice rich girl who befriends Eddie’s girlfriend. The nice rich girl hangs out at the trendy night spot known as The Dead Rat Cafe (the decor of which features drawings of dead rats all over the walls and is one of the highlights of the film), not knowing that it’s run by Jane’s gangster boyfriend. The nice rich girl is kidnapped by the gangster to be sold into white slavery. She is to be the plaything of the big chief of the drugs and vice racket. The conclusion involves several shocking revelations, as Jane battles to save her brother from the wickedness of his life in the big city. He can be saved, but there’s no hope for her because "girls can't go back.”

The lesson of the movie is not so much about the evil of drugs. It’s more the evils of the city, and of pleasure. Looking for fun and pleasure will inevitably lead to destruction and disgrace, especially if you’re a woman.

Like most of the exploitation movies of that era The Cocaine Fiends sheds interesting light on the anxieties engendered by the modern world. Modern life is seen as threatening and dangerous. And like most such films it faces the fascinating contradiction of condemning the very things on which it relies for its chance of commercial success, which for such movies depended entirely on the thrill of the forbidden and the illicit.

It’s really more of an interesting historical curiosity than anything else, and is only worth watching if you have a real taste for these kinds of movies that operated in the netherworld outside the Hollywood studio system.
Posted by dfordoom at 16:28

A PERFECT DRIVE IN FLICK....