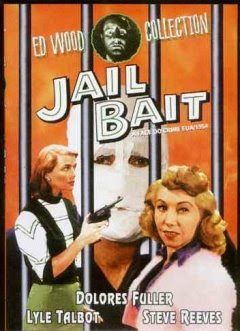 Jail Bait is a 1954 film noir written and directed by Ed Wood. Yes, that Ed Wood. As you might expect, the results aren’t quite in the same league as Double Indemnity or The Big Sleep.

The plot is a definite film noir plot, with a young criminal who isn’t really evil but is seduced by the excitement of a life of crime, and by the fast talking and apparently glamorous life of an older hoodlum. He soon finds himself in way over his head, involved in a murder, and with his partner hunting him down. The twist is that the young hood is the son of an eminent plastic surgeon, and the older hood ends up employing the doctor to give him a new face to escape the clutches of the law. But this is an Ed Wood film, and it has the terrible acting, jaw-dropping dialogue and generally bizarre scripting that were his hallmark.

The cast includes the faces you expect to see in this type of ultra low budget exploitation movie, with Timothy Farrell giving his standard bad guy performance (which is always fun as he makes his bad guys delightfully sleazy) and Lyle Talbot as the decent older cop.

The problem with this movie is that Wood was trying to make a conventional mainstream movie, and it lacks the extreme weirdness that makes his other movies so watchable. This one even has a plot that makes sense, which is very disappointing indeed. The dialogue is bad, but it’s also a little too much like a bad version of standard film noir dialogue, with not enough Ed Wood strangeness.

The plot twist at the end does add a touch of horror, and it’s even filmed quite competently, with actual dramatic tension. The most enjoyable thing about it is the sound-track - it’s the most outrageously inappropriate use of classical Spanish guitar music you could possibly imagine! There’s also a strip-tease sequence that has absolutely no connection whatsoever with the rest of the movie, but Ed must have just liked it.

Jail Bait really demonstrates that Ed Wood’s genius could never have flourished in the world of even slightly mainstream film-making. It’s an amusing way to spend an hour or so, and no Ed Wood movie is ever truly dull, but just don’t expect an off-the-wall masterpiece of weirdness.
Posted by dfordoom at 17:37