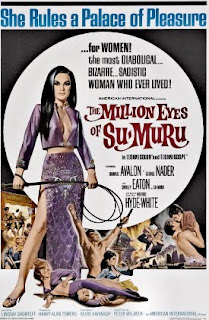 The Million Eyes of Sumuru is a movie I’ve been lusting to see for years. I love Sax Rohmer’s Sumuru novels, and this 1967 movie sounded like great campy fun.

And mostly it is. If only they hadn’t tried quite so hard to be funny, and to insert a wise-crack in every line of dialogue, it could have been one of the great camp classics. They really should have relied on the sheer outrageousness of the idea and the delightful loopiness of the plot which are more than enough on their own. As it is, it’s still pretty good, although I think Jess Franco’s “sequel” The Girl from Rio is better. Franco knows how to do silly comic-book style campy fun as well as anyone I can think of.

The Million Eyes of Sumuru introduces us to the world’s most glamorous and most beautiful diabolical criminal mastermind. But Sumuru doesn’t see herself as evil. She dreams of a world run by women, a world in which ugliness, violence and hate have been abolished. And in order to bring this world to fruition, she’s forced to use some slightly unpleasant methods. Such as murder and torture.

George Nader is Nick West, a CIA agent who’s been conned into working for British Intelligence, since the CIA owes them a favour. And Colonel Sir Anthony Baisbrook (Wilfrid Hyde-White) is very good at manipulating people into doing things they don’t want to do, in the most polite way possible. The British have be 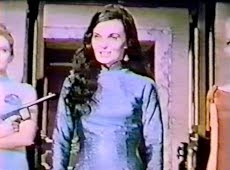 en trying, without success, to crack Sumuru’s operation. They know that Sumuru plans to assassinate the president of an obscure but oil-rich Asian nation, so they’re hoping to lay a trap for Sumuru by allowing her to use West to infiltrate the president’s security services.

West and his wealthy playboy buddy Tommy Carter (Frankie Avalon) find themseves deeply enmeshed in Sumuru’s plans, and equally deeply enmeshed with a bevy of beautiful but deadly young women. There is one flaw in Sumuru’s operation - her female operatives have a distressing tendency to either fall in love with, or jump into bed with, and good-looking man they happen to encounter. Love is Sumuru’s greatest enemy! And Sumuru herself admits to being unable to overcome her insatiable desire for men. Especially handsome American secret agents.

The plot becomes wonderfully far-fetched and excessively convoluted, which is exactly as it should be in this type of movie. West and Carter find plenty of time for romancing Sumuru’s agents, particularly the gorgeous Helga (played by 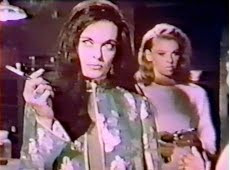 Maria Rohm, later to become familiar face in eurosleaze movies). It builds to an exciting and action-packed climax with plenty of explosions and gunplay.

George Nader and Frankie Avalon are the big weaknesses. They try too hard and quickly become annoying. Fortunately the movie has plenty of other compensations. For starters there’s Shirley Eaton as Sumuru, camping it up in full-on Beautiful Evil Vamp mode. She’s superb. And there’s Klaus Kinski as President Boong, in a very camp performance indeed. Eaton and Kinski are more than good enough to compensate for the deficiencies of the two male leads. And Wilfrid Hyde-White is, as always, immensely entertaining.

The film was made partly in Shaw Brothers Studios in Hong Kong, which is where most of the action takes place. There are outlandish 60s costumes, and suitably excessive sets. The action scenes are impressively mounted for what was a fairly low-budget movie. 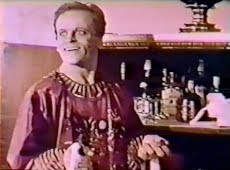 There’s the degree of sexism that you’d expect given the time period and the subject matter but it’s all done in such an obviously tongue-in-cheek manner that I don’t think anyone could find it offensive. And, refreshingly (and surprisingly), it’s almost entirely free of racial stereotypes. So really you can just sit back and enjoy the silliness.

There’s no gore, no nudity and virtually no sex. Apart from a scene where Sumuru takes a whip to Nick West it’s all pretty innocuous, but the emphasis is on fun and in that area it delivers the goods. If you enjoy 1960s spy spoof/secret agent adventure romp movies it would be almost impossible not to enjoy this one. Shirley Eaton’s performance makes it compulsory viewing.
Posted by dfordoom at 15:55

I've seen Girl From Rio and thought it didn't live up to the concept's potential, though it did have some definite comic-book moments. You make this one sound oddly intriguing despite your caveats and a film with Kinski and Avalon probably is a must-see.

Wow, this sounds amazing! And Sumuru looks astonishingly gorgeous to me. Add a campy Kinski and Frankie Avalon, and I think I need to see this one asap.

Vicar, if you have a taste for camp this movie is positively seething with it. With Kinski leading the pack. And apparently Kinski had wanted to play the role even more outrageously, with large amounts of face-licking! And the use of tongue extensions. Yes indeed, the mind boggles.