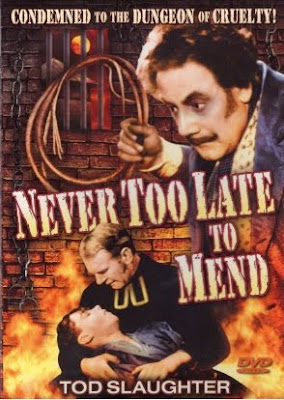 Never Too Late To Mend is a Tod Slaughter melodrama, and if you’re familiar with his movies you’ll know that there is going to be much fun to be had.

Like all his classic movies this one emanates from George King Productions and captures perfectly the spirit of Victorian melodrama.

This time Slaughter plays the wicked Squire Meadows. Squire Meadows wants to marry Susan, the beautiful daughter of Farmer Merton. Farmer Merton is not against the match, but Susan is in love with impecunious farmer George Fielding. Farmer Merton tells George that he will never gain his daughter’s hand until he can produce a thousand pounds.

George’s only chance of obtaining such a vast sum (and in mid-19th century England this was a very vast sum indeed) is by going to the colonies to seek his fortune. He intends to take ship for New South Wales.

This will leave the field open for Squire Meadows, but given that he is twice the age of George Fielding and that Georg 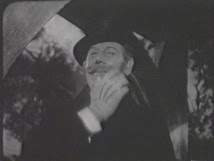 e Fielding is a handsome young man Squire Meadows decides it would be wise to take no chances. He concocts a scheme to have George arrested for poaching. The plan miscarries when George’s friend Tom bravely confesses to the crime to save his friend from prison.

While George is in his way to Australia the unfortunate Tom finds himself in the local prison, the administration of which is largely in the hands of the visiting Justices of the Peace, one of whom is none other than Squire Meadows. The brutal treatment of the prisoners is encouraged by the squire. He claims that he regards the prisoners as his children, but in reality they’re simply a convenient means for satisfying his sadistic impulses and his greed.

The only person at the prison who stands up to him is the prison chaplain, who 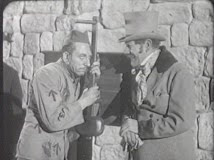 was formerly the local parish priest.

Squire Meadows’ plotting is about to come undone however. He has finally, largely as a result of financial pressure exerted on her father persuaded Susan to marry him but on the eve of the wedding George Fielding suddenly reappears. And he has on his person not just one thousand pounds, but no less than seven thousand pounds. He has struck gold, literally, in New South Wales.

Of course Squire Meadows is not going to give up so easily and the stage is set for a classic melodramatic finish. 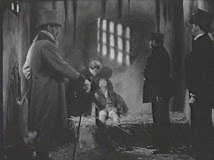 As with most of his movies there’s a bit of social comment, and a generous helping of sentimentality. It all works extremely well.

Tod Slaughter was always tremendous fun in these roles and in this one he’s at his wicked best, even indulging in actual moustache-twirling. 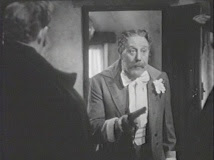 ou’ll ever find of Victorian melodrama. He played these roles on stage as well and having been born in 1885 and having made his stage debut in 1905 he must have had some first-hand experience of seeing the genuine article. He was almost 50 before he made his first movie so his whole acting style is very stagey. For this kind of material that’s a major asset.

If you’ve never seen a Tod Slaughter movie then you’ve missed out on a exceptionally enjoyable experience. Never Too Late To Mend is a good place to start, although Sweeney Todd is perhaps better.

Alpha Video’s DVD release (from their Tod Slaughter boxed set) is reasonable enough quality by Alpha Video standards - a bit faded and grainy but perfectly watchable.
Posted by dfordoom at 18:26

I have never seen a Tod Slaughter movie! I need to check one out.

Silly question: The Amazon page says th3 1936 Demon Barber of Fleet Street is a "non musical version" -- is there a musical version of the 1936 movie?

Stacia, no, I think they were just differentiating it from Tim Burton's movie.

You must see at least one Tod Slaughter movie. They're unbelievably outrageous. You have never seen scenery chewed until you've seen Tod Slaughter chew scenery. And Sweeney Todd was his greatest role.