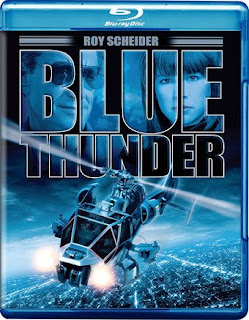 Blue Thunder is a 1983 action techno-thriller directed by John Badham that suffered greatly from being constantly tweaked and rewritten. It’s still a lot of fun and it’s better than its rather dubious reputation would suggest.

Frank Murphy (Roy Scheider) is an LAPD helicopter pilot with a tendency to get himself into trouble. He’d been in Vietnam and he’s never been quite stable ever since. He’s not crazy, just inclined to lose his cool at times. He and his observer, Richard Lymangood (Daniel Stern), are pretty disturbed by an attempted rape case they were involved in (they were spotting from the air for the cops on the ground). What disturbed them was that it was obviously not an attempted rape at all. Something was certainly going on and a woman ended up in hospital with gunshot wounds but the official version does not tally with what they saw. And it’s been made clear to them that they should just forget about the case.

Then Frank and Lymangood get what seems to be a great opportunity. They’re selected to crew a new experimental police helicopter, known as Blue Thunder. It’s more like a military helicopter gunship than a police chopper. Frank is not entirely happy about this. Having been in Nam he’s understandably a bit sceptical about the government and the military and he has just a bit of a bad feeling about Blue Thunder.

He has even more of a bad feeling when he discovers that a certain Colonel Cochrane (Malcolm McDowell) is involved in the project. Frank served with Cochrane in Vietnam and they hate each other. Frank figures that anything that Cochrane is involved in is something to be suspicious of.

Apart from an absurd array of heavy weaponry Blue Thunder carries all sorts of surveillance equipment, giving it the kind of capability that might appeal to the Feds but is perhaps not entirely appropriate for a police force. Everything about Blue Thunder seems to be calculated to give the cops capabilities that could very easily be abused, and when you give law enforcement agencies the opportunity to abuse their powers experience suggests that those powers will in fact be abused. 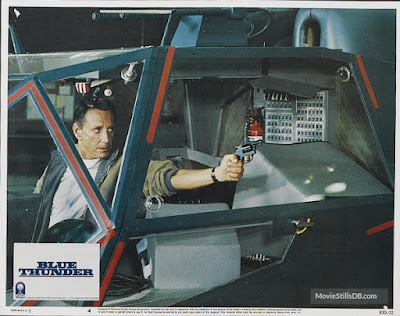 Frank’s fears turn out to be well grounded but as he discovers more he realises that maybe he’s discovered too much for his own safety. And maybe too much for other people’s safety as well.

It all leads up to some spectacular action sequences and some very cool aerial combat scenes.

One of the reasons that this movie is often viewed in a negative light is that the original concept (by screenwriters Dan O’Bannon Don Jakoby) was quite different and a lot of people think that original concept had a lot more potential. There’s probably some truth to that. The political overtones could have been more fully developed. On the other hand the movie does make its main political point effectively enough, and that point is much more relevant today than it was in 1983. Today we really do have government agencies with frightening surveillance capabilities at their disposal and we have much more militarised police forces than was the case in the early 80s.

The script does show signs of having been fiddled with obsessively. Some of the dialogue is clumsy (there was a writers’ strike at the time so director Badham had to write some of the dialogue himself). The characters don’t have a lot of depth. The plot has some contrived moments. It can get rather silly and cartoonish.

In the original conception Frank Murphy was a much darker character, a genuine out-of-control crazy. Murphy’s craziness was toned way down and the Colonel Cochrane character added as the chief villain. I think this change may actually have been a positive one. Having Murphy as a hero (even a flawed hero) at least gives us someone to care about and avoids too much of an emphasis on 1970s nihilism. 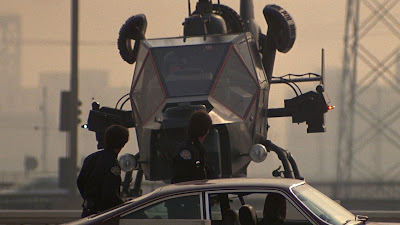 Roy Scheider is OK as Murphy. He’s sympathetic but we’re never entirely sure he knows what he’s doing. Malcolm McDowell plays Cochrane as an over-the-top melodrama villain but that’s why he was cast - he was very good at that sort of thing. Warren Oates is terrific as Murphy’s long-suffering boss and Candy Clark goes close to stealing the picture as Murphy’s ditzy girlfriend.

This was 1983 so there’s no CGI. The action sequences, including most of the aerial sequences, were done for real with real helicopters. It has to be said that as a result those sequences look a hell of a lot better than they would have done had they been achieved with CGI. The stunts are spectacular and all the action stuff stands up extremely well today.

The Blu-Ray special edition offers a very good anamorphic transfer and is packed with tempting extras.

As a politically tinged techno-thriller Blue Thunder might not have realised its full potential but mostly it works. As an adrenaline-charged fun action movie it works superbly. Highly recommended.
Posted by dfordoom at 10:22

Yes, I remember this - subtle it ain't! But I recall that the main battle at the end was good.
I actually saw the TV series first - it was on the BBC, and I think they must have repeated it, because I seem to remember it running for more than 11 episodes. It's probably only remembered now for a young Dana Carvey.