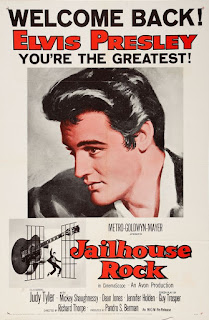 It’s many years since I’ve seen an Elvis Presley movie but since I like his music and since his movies certainly qualify as cult movies I thought it was about time I checked out a few of them. Jailhouse Rock, released by MGM in 1957, was his third movie. His first two movies had been hits but Jailhouse Rock is definitely a bit more ambitious. It features great songs and it makes an attempt to be at least somewhat gritty.

The character he plays, Vince Everett, is a nice guy but he’s impulsive and he has a temper. He gets into a bar fight. He’s trying to defend the honour of a lady (who probably isn’t much of a lady) but he gets carried away and the guys dies and he finds himself serving a prison sentence for manslaughter.

His cell mate is a broken-down country singer named Hunk Houghton (Mickey Shaughnessy) who is the prison entrepreneur. If there’s a way of making money in prison Hunk knows it. Hunk teaches Vince that if you don’t have money in this world you’re nothing but he also gets Vince interested in the idea that you can actually earn a living as a singer.

After being released Vince meets music industry insider Peggy Van Alden (Judy Tyler). His first attempt at stardom fails but Vince is not a guy who gives up easily. They start their own record company and pretty soon Vince is the biggest sensation in the music business. He’s on the way to fame and fortune but he’s also in danger of losing his basic decency. Too much fame and fortune too soon can be a dangerous drug. And the inevitable romance between Vince and Peggy seems destined to crash and burn.

This is of course a musical and it pretty much follows the long-established template for movie musicals. It borrows elements from the classic backstage musicals and it’s your basic rags-to-riches story wherein the star makes it to the top but then they’re going to have to learn that there’s more to life than money and fame. Musicals don’t require complicated plots and the plot in this movie is more than adequate for the purpose. 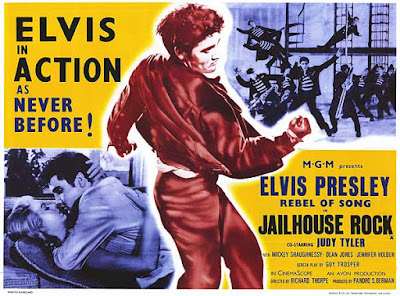 As an actor Presley is actually not that bad. In Hollywood he quickly gained a reputation for professionalism and for being, by Hollywood standards, a remarkably polite and easy-going guy. He refused to take acting lessons but he took acting quite seriously. What’s interesting is that he really is acting here, he’s not playing himself. Vince is not at all like Elvis. He’s surly and rude and bad-tempered and he tramples over other people’s feelings. It’s not that Vince is a bad guy. He would never actually cheat anybody. He won't even cheat Hunk even though Hunk tries to cheat him. There’s a lot of good in Vince. He just needs to grow up and he needs to think before he acts.

This was the era of the brooding self-pitying new style of star like Marlon Brando and James Dean who were seen by Hollywood as the key to attracting a younger audience. The performances of Brando in movies like The Wild One and Dean in Rebel Without a Cause now seem embarrassing but Presley’s performance stands up quite well. He didn’t know anything about Method Acting techniques. He just followed his instincts and as a result his performance comes across as more natural and less contrived. He wasn’t a great actor by any means but in a rôle like this he’s fine. 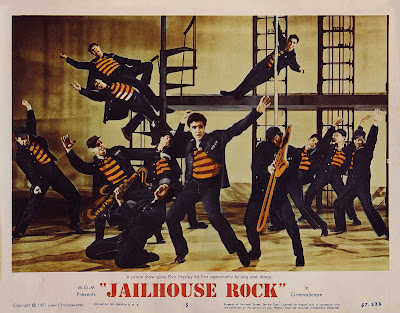 Judy Tyler is the perfect leading lady for Elvis. As Peggy she’s strong-willed but feminine and while she’s not going to let Vince walk all over her she’s not going to give up on him either. Tragically Tyler was killed in a car accident at the age of 24 shortly after shooting of the film was completed.

It helps if a musical has good songs and that’s where Jailhouse Rock really scores.

The tricky part for Elvis was that Vince, when he’s first trying to get a break in the music industry, is really not very good so in the early songs he has to come across as a mediocre singer and it’s not easy for a great singer to sound mediocre. He does this pretty well. He manages to make those early songs sound slightly lifeless. Of course Vince soon learns what he’s doing wrong as a singer and then Elvis gets to give us some truly great local performances. 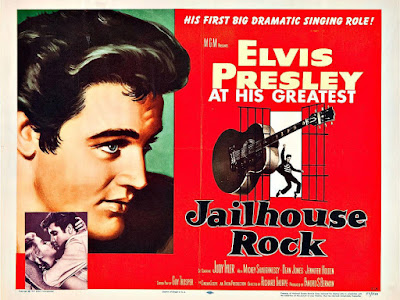 The Jailhouse Rock number was Hollywood’s first ever attempt at a rock’n’roll big production number in the classic movie musical style and it’s great. Elvis rejected the initial choreography explaining that he just couldn’t do that type of dancing so the choreographer then built the whole routine around the type of dancing that Elvis could do. The results are superb. The (You’re So Square) Baby I Don’t Care production number is in a different style but it’s just as good.

The Blu-Ray release is excellent. The black-and-white cinematography looks terrific and there are a couple of worthwhile extras including an audio commentary.

This is not a big-budget blockbuster but neither is it a low-budget affair. Production values are quite high. Having Elvis as the star in 1957 was pretty much a guarantee of box-office success (and it did extremely well) so it was obviously considered worthwhile to spend some real money on the production. It’s well made and the acting performances (Including Elvis’s) are a cut above B-movie standards.

Jailhouse Rock combines all the virtues of the traditional Hollywood musical with the energy of rock’n’roll and the charisma of Elvis. Highly recommended.
Posted by dfordoom at 23:33

Dfordoom, I've never thought of 'Jailhouse Rock' as a cult film. But maybe with time it is becoming one. I think Elvis was clearly in admiration of both Brando and James Dean. Brando was of course absolutely awesome in a Streetcar Named Desire.

I did rather prefer Elvis in King Creole which was made around that time before Elvis committed himself to those truly awful but innocent Hollywood candy floss films. But yes, from that early period I quite liked 'King Creole' and in black & white as well. And Elvis was really quite awesome in 'Loving You.' Some great acting there as well.

They said that Elvis was desperate to secure the leading role opposite Barbara Streisand in 'A star is Born' around the mid 1970's. Of course Kris Kristofferson landed the role and Elvis was devastated not to get it. He thought that by landing the role it would have finally legitimized him as an accomplished actor.

But maybe I need to re-watch Jailhouse Rock again."

It's definitely worth taking another look at.

And yes, Elvis actually could act, given the right rôle.