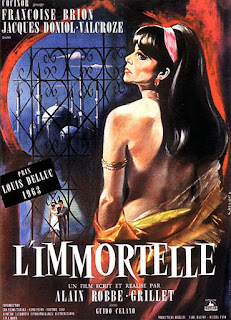 L’immortelle (The Immortal One), released in 1963, was Alain Robbe-Grillet’s first film as director. He was already reasonably well known as a novelist and as the co-writer of the classic film Last Year at Marienbad which came out in 1961. Last Year at Marienbad is a movie that has puzzled, delighted and exasperated viewers ever since and many viewers will have similar reactions to L’immortelle. It certainly is one weird-ass movie. The cinematic world of Alain Robbe-Grillet is a very strange world (albeit a fascinating one).

L’immortelle was shot on location in Istanbul, which was one of the conditions Robbe-Grillet had to accept in order to be able to make the film. As it happens he was delighted, Istanbul having been where he met his wife and thus being a city with all sorts of romantic connotations for him. And this movie is a love story. Of sorts.

A man (we later discover that his name is Andre), newly arrived in the city, meets a woman (played by Françoise Brion). She tells him her name is Leila. She seems to be French but she tells I’m that she isn’t. She later tells him her name is Lale. He is immediately besotted by her. And she seems to be interested in him. She does however seem to be holding back. She will promise to meet him, but not show up. And then suddenly she will show up. When she disappears he tries to find her but nobody seems to know anything about her.

Perhaps she is running away from someone. It could be the man with the dogs. Is she his wife or his daughter?

Or perhaps she might even be his slave. There are mentions of girls being kept as slaves. And she sometimes behaves in a manner that might suggest she is a slave, or of course it might also suggests that she enjoys playing at being a slave, or even that she’d like Andre to enslave her. It might be worth pointing out that Catherine Robbe-Grillet, the director’s wife (who plays a supporting rôle in the film), was the author of the celebrated sado-masochistic novel L’Image (filmed by Radley Metzger in 1974 as The Image). And sado-masochistic themes recur in Alain Robbe-Grillet’s filmography. 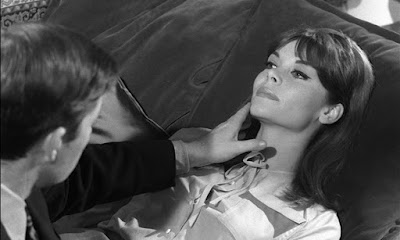 There are also the doubles. Lale has a double, or perhaps more than one double.

And then they go for a drive and things get really strange. 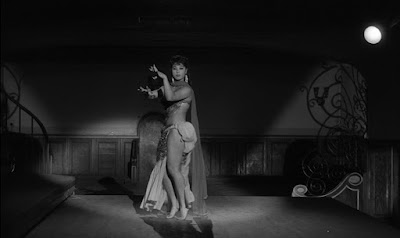 If you read synopses and reviews of this film elsewhere you’ll find that they reveal rather a lot of plot details, in my view perhaps too many. I do not intend to do that. Some of the events of the story may in retrospect seem inevitable but I personally think it’s better to just experience the film. 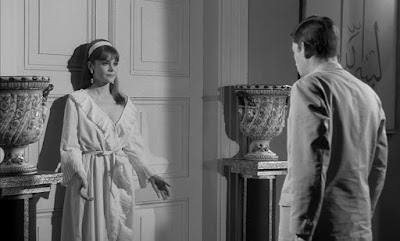 You don’t expect a straightforward linear narrative in a Robbe-Grillet film and you don’t get one here. But the narrative is perhaps not quite as non-linear as it appears to be, once you figure out what is going on. And you do figure out what is going on. The essential mystery does become clear. Or at least there are several related possible solutions to the mystery. There are several very definite clues (which I don’t intend to reveal). There are other mysteries in the film that remain mysteries.

You may become frustrated at times, felling that the director is just playing games with you. Of course he is playing games with you, that’s the whole point of the exercise, but he doesn’t actually cheat. If you stick with it you’ll find that the possible explanations make sense. Although it should be added that Robbe-Grillet had definite surrealist tendencies so the film makes sense on its own artistic terms rather than on the terms that we associate with everyday reality.

The black-and-white cinematography is gorgeous. 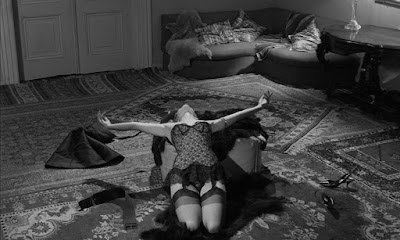 This is, as Robbe-Grillet admits, the Istanbul that tourists expect to see and this is deliberate. While Andre doesn’t like to think of himself as a tourist he is one really, seeing the Istanbul he expects to see. The fact that this might not be the real Istanbul is irrelevant. And this is significant. In the Istanbul of Andre’s tourist imagination white slavery still exists and there are still harems filled with slave girls  (in fact the Turkish government had closed all the harems forty years earlier). The Istanbul of Andre’s imagination is also a place filled with spies (the city having been the setting for countless spy thrillers). So Andre is a man who expects Istanbul to be a city of intrigue, which may well colour his responses to some of the woman’s actions.

The British Film Institute has released this movie as part of a boxed set (on both DVD and Blu-Ray) called Alain Robbe-Grillet: Six Films 1963-1974. The anamorphic transfer looks lovely. The extras include an audio commentary by Tim Lucas and a fairly lengthy interview with the director (who comes across as an extraordinarily jovial and open sort of guy who loves talking about his movies).

L’immortelle, being made in 1963, does not possess the full-blown eroticism of later Robbe-Grillet movies such as La Belle Captive but the eroticism is certainly there.

Critics and audiences at the time were lukewarm about this movie, perhaps because Andre is (intentionally) a colourless protagonist and they felt that the film dragged a little in the middle third when Lale temporarily disappears. L’immortelle is still a strange surreal but fascinating film. Highly recommended.
Posted by dfordoom at 00:36