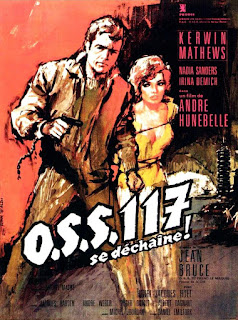 OSS 117 Is Unleashed (OSS 117 se déchaîne, 1963) is part of the very successful French OSS 117 eurospy movie series. The first movie came out in 1956 and there was a long gap before the second film in 1963 (by which time of course the Bond craze was really beginning to gather steam). Six more films were made prior to 1971 (that’s not counting the three recent 21st century entries in the cycle).

Director André Hunebelle seemed to specialise in action movies in the 60s and he made four of the OSS 117 films.

It’s interesting that the movie features underwater action, two years before the Bond series would follow suit with Thunderball.

American scuba diver William Roos (actually an agent) vanishes on a dive off the coast of Corsica. There are suspicions that the bad guys are building underwater detectors to track nuclear submarines, thus threatening world peace. OSS 117 is sent to investigate. Scuba diving instructor Nicolas Renotte was present at the time Roos met with his unfortunate accident. It’s obvious that Renotte is scared and is lying about the circumstances of the incident so putting pressure on him seems to be a good first move for OSS 117. 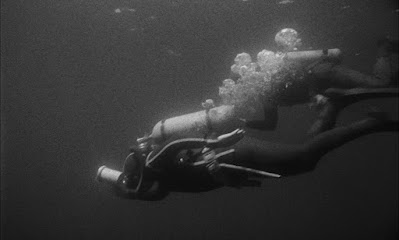 There’s a woman mixed up in this as well of course. She’s a Swedish girl named Brigitta (Nadia Sanders) and OSS 117 will have to decide whether he can trust her or not. With glamorous blondes you can never be sure. Meanwhile people keep trying to kill him and those people seem to be trying to kill other people as well.

The point of it all is to find that submarine detector which is almost certainly hidden away in an underwater grotto. And naturally the point is also to stay alive long enough to find it. For Agent OSS 117 romancing various ladies is also a high priority and luckily Corsica seems to be knee-deep in attractive young ladies. 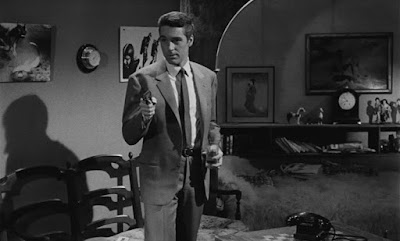 Kerwin Matthews makes an OK hero although he’s no Sean Connery. He was one of the many America actors who headed to Europe when their Hollywood careers failed to live up to their expectations. He did plenty of adventure movies in both Hollywood and Europe so he handles the action scenes well enough. And he has a certain charm. It goes with saying that Agent OSS 117 is very attractive to the female of the species and Matthews is sufficiently good-looking to make that plausible. He just doesn’t have charisma.

Nadia Sanders makes a suitable dangerous blonde. Daniel Emilfork makes a good subsidiary villain but a weakness of the film is that it lacks a sufficiently colourful (or sufficiently sinister) main villain. There’s also Irina Demick as another beautiful but dangerous woman. The producers certainly understood the importance of beautiful women in a spy movie 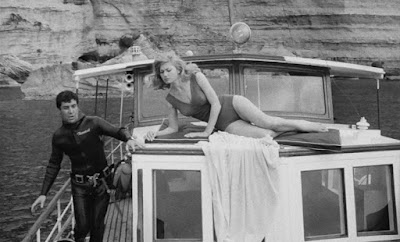 The Corsican locations look great with some spectacularly rugged coastline. The budget was obviously limited although the villains’ secret underground headquarters with its gadgetry is not too bad.

The plot at least makes sense and even with various double-crosses going on it’s easy enough to follow. 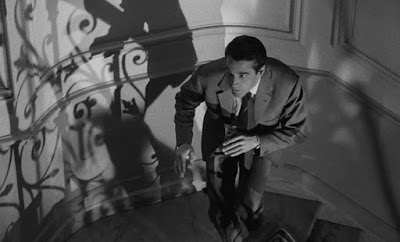 This film was filmed widescreen in black-and-white. The next entry in the series would switch to colour and Cinemascope.

Kino Lorber have released five of the 1960s OSS 117 movies in both Blu-Ray and DVD boxed sets. Eurospy movies are a bit of a passion of mine and it’s not at all easy to find such films in decent English-friendly versions (mostly you have to watch them in sub-standard pan-and-scan presentations) so having five of these movies all released in their correct aspect ratios is pretty exciting. The transfer for OSS 117 Is Unleashed is pretty good although it is just a bit grainy.

OSS 117 Is Unleashed is an enjoyable eurospy flick and its plot coherence is a bonus. It has its flaws but I’m still going to highly recommend it because I just love eurospy movies.
Posted by dfordoom at 17:30

Watched the Blu Ray last night. The film looks great - the underwater stuff was surprisingly good, and there are some very interesting locations. Mathews was fine - I watched it in French with subs, so no idea what his vocal performance was like. There were some decent twists, and the women are all beautiful.

There's a lot of dialogue about how evil the villain is, but it doesn't really come across - he's just the other side's head operator. I found his fate at the end very effective.

You're right, it is slow - I pretty much only half-watched the middle section, as my mind had wandered. And it is crying out - I mean seriously crying out - for John Barry!