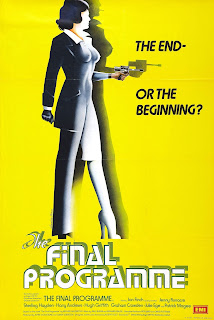 If you enjoy eccentric cinema then the 1973 British sci-fi film The Final Programme might be just what you’re looking for. If on the other hand you’re expecting a conventional science fiction film then this is most definitely not for you.

It was based on the first of Michael Moorcock’s Jerry Cornelius novels. Considering how popular and how prolific Moorcock was (he was one of the major figures in British science fiction) it may seem surprising that this is the only novel of his that has ever been filmed. If however you’ve ever read one of Moorcock’s books you’ll understand why film-makers avoided them. They’re bursting with mind-numbing ideas, they’re wildly extravagant, they’re convoluted and they’re rather cerebral. Only a very rash or very brilliant director would have contemplated trying to film a Moorcock novel. And Moorcock’s Jerry Cornelius stories are even stranger than the rest of his output.

Jerry Cornelius (Jon Finch) looks like a refugee from Carnaby Street in the Swinging 60s but this dandified individual is actually a Nobel Prize-winning scientist. His father, an equally brilliant scientist, has just died (to be given a Viking-style funeral in Lappland). Jerry finds that the glamorous Miss Brunner (Jenny Runacre) and three rather dotty scientists are extremely anxious to get hold of a microfilm that Jerry’s father left behind.

Jerry has other priorities. He wants to return to his father’s house, and blow it up. Preferably with his brother Frank inside it. He is most of all anxious to rescue his sister Catherine who is being pumped full of drugs and held incommunicado at the house by Frank. Miss Brunner and her pet scientists are however very insistent. Miss Brunner is happy for Jerry to carry out his plans to revenge himself on Frank but she must have that microfilm. It’s the secret to the Final Programme, a computer project in which she has an intense personal interest. 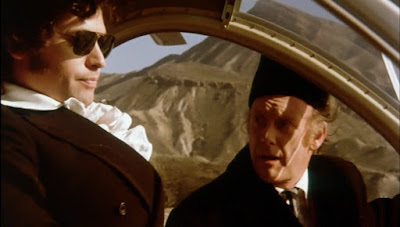 The purpose of the Final Programme is what today would be described as extreme transhumanism - the creation of an immortal being using two human brains as the raw material. That’s an adequately extravagant premise for a sci-film that The Final Programme adds lots of other weirdness as well. There’s the revenge plot, there’s the slightly unhealthy affection Jerry has for his sister, there’s the bisexual Miss Brunner’s rampant sexual appetites and there’s a WW2 German U-boat and there are scenes that take place in an abandoned Nazi secret laboratory. There are disembodied brains. There’s not just one mad scientist - there are lots of scientists and they’re all mad in different ways.

There are also a lot of elements that the movie makes no attempt to explain. Why do Jerry and his brother have a homicidal hatred for each other? Can Miss Brunner literally consume her sexual partners? What are the motivations of Miss Brunner’s pet scientists? Why is the Cornelius house filled with deadly booby traps? And in exactly what type of future world does this story take place? It seems to be a world in the grip of a long-running nuclear war but this is something that we learn in passing. 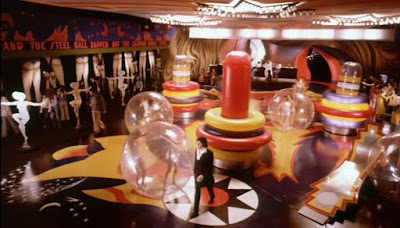 There is no point whatsoever in criticising writer-director Robert Fuest for any of these things since they are all obviously deliberate. He has no interest in presenting us with a coherent conventional narrative. He obviously intends to puzzle us. There is also no point in criticising Fuest for emphasising style over substance. This movie is a deliberate exercise in style.

Some of the special effects are a bit iffy but to be fair there was probably no way of avoiding that without a very much larger budget.

The set designs are futurist psychedelia, at times reminiscent of A Clockwork Orange. I loved the sets but they are totally outrageous (in fact I loved them because of their outrageousness). The gigantic pinball machine set is particularly impressive. 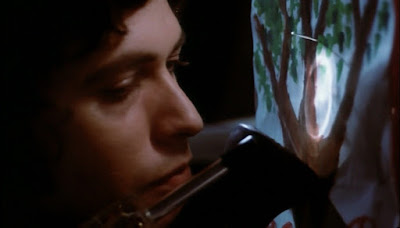 After making Macbeth for Polanski and Frenzy for Hitchcock Jon Finch was a very hot property indeed in 1973 although his subsequent career failed to live up to its early promise. His performance here is decidedly odd - you start off expecting Jerry Cornelius to be arrogant and supremely self-confident but as the film progresses he seems to be less and less in control and less and less sure of himself. You start to suspect that maybe he hasn’t got a clue what’s going on. I think the performance works simply because it isn’t what you’re led to expect it will be.

Jenny Runacre is rather splendid as Miss Brunner, a woman who could be described as both a sexual and intellectual carnivore.

The supporting cast includes wonderful British character actors like Patrick Magee, Graham Crowden and Hugh Griffith. Everyone in this film gives an excessive performance, which is exactly as it should be. 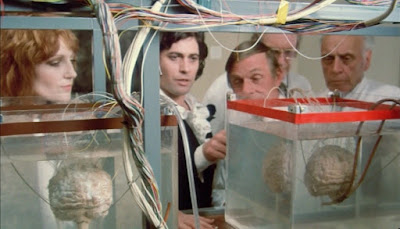 There are some esoteric intellectual themes being played around with. The creation of the replacement of the super-being is intended to bring the Kali Yuga, the last of the four ages of the Earth in Hinduism. Whether this will result in the end of the world, or a rebirth, or chaos or a golden age is quite another matter. The ending is somewhat cryptic, but a straightforward unambiguous ending what would have been quite out of place in such a film. If you want everything to be made clear at the end you’re watching the wrong movie.

Network’s UK DVD release offers a good anamorphic transfer. They’ve released in on Bl-Ray as well. I believe this movie was also previously released on DVD by Anchor Bay.

The Final Programme is psychedelic pop-art sci-fi with some spy elements and lots of mad scientist stuff with some mysticism thrown in. It’s a wild ride and you may hate it or you may love it. I loved it. Highly recommended.