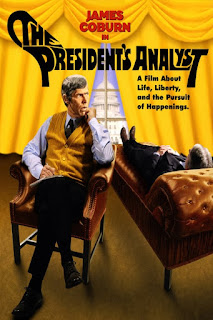 The President’s Analyst is a delightfully oddball 1967 spy spoof/satirical comedy. And what is it satirising? The answer is, pretty much everything. It’s also a vehicle for the slightly off-kilter talents of star James Coburn.

Dr Sidney Schaefer (James Coburn) is a psychoanalyst and a very successful one. He receives an offer he can’t refuse (although as it turns out he should have refused it). He is offered the position of analyst to the President.

Sidney’s problem is that everybody has an analyst, except him. Every psychoanalyst has his own analyst (that was more or less the rule). But because of national security concerns Sidney isn’t allowed to have an analyst. So he has nobody with whom he can discuss his own problems and his ever-growing paranoia.

He can’t talk to his girlfriend Nan (Delaney), because he’s not allowed to sleep with her because of national security concerns (and because he talks in his sleep). He can talk to her on the telephone but the ’phone is probably tapped. His office is bugged. His home is bugged. His car is bugged. If he goes to a restaurant it’s bugged. Everywhere is bugged.

Sidney runs away from the craziness. He wants to just calm down and be among normal people. But everywhere he runs to he finds more craziness. The weird people who look crazy really are crazy, but the normal people who don’t look crazy are crazy as well. And it doesn’t matter where he goes, it will be bugged. And wherever he goes, there are going to be spies after him.

We also discover that spies need to talk their problems through as well. They need analysts to deal with the craziness of the world of espionage.

James Coburn was always at his best playing offbeat characters in offbeat films, especially offbeat comedies (such as the wonderful spy spoof Our Man Flint). As you’d expect he shines in this movie. Sidney Schaefer is a weird hyper-confident hyper-active sort of guy but he’s really just trying to make sense of a world in which nothing makes sense. He doesn’t want to do any harm to anybody. He just wants to be a psychoanalyst and marry his girlfriend Nan.

Writer-director Theodore J. Flicker had an interesting career, enjoying his biggest successes in television. He was probably just too offbeat to become a really big success in Hollywood and even though everyone in Hollywood was trying to make zany movies in 1967 The President’s Analyst was just too strange and unclassifiable for both audiences and most critics.

That might have been its problem in 1967. It doesn’t seem to have any political agenda other than mocking people who are obsessed with political agendas, and it doesn’t aim its barbs at the Americans or the Russians or the Chinese, it aims those barbs at everybody. It’s satirising the whole paranoid mindset.

This is a very clever very funny movie. The satire is merciless but because it’s directed so widely it’s rather good-natured. Everybody is crazy in this movie. It’s one of the more interesting and effective 60s spy spoofs. It’s zany without being merely silly. The revelation at the end, that there’s an organisation more sinister and more terrifying than any spy agency, works perfectly.

There are so many good moments in this film - the spies stalking each other as Sidney canoodles with a hippie girl, the nice-guy KGB agent with both mommy and daddy issues, the hijacked telephone booth, the nice ordinary suburban couple who are deadly killing machines. And there are surprisingly few false notes. The jokes come thick and fast and they’re consistently funny.

This is a very underrated movie. The President’s Analyst is very highly recommended.
Posted by dfordoom at 19:07

First caught this on American TV,maybe SATURDAY NIGHT AT THE MOVIES, who obviously thought it was the 3rd Derek Flint film i.e. Bond knock off, tho to be fair, the Flint films were probably the best of that bunch....this one was SOOO bizarre and funny and weird, it stuck in my head and made it a return viewing nearly every time it was broadcast... much later, I found the VHS and DVD versions had replaced the Barry McGuire songs, due to rights issues I think.... hopefully that will get sorted someday...

Tbone Mankini said...
"the Flint films were probably the best of that bunch"

Yes, I'd go along with that. It was a golden period for James Coburn.