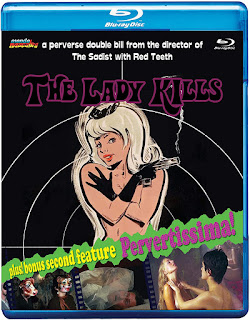 Writer-director Jean-Louis van Belle’s The Lady Kills (Perverse et docile) is a 1971 French psycho-sexual thriller with plenty of exploitation elements and a certain unique style of its own.

As soon as the movie starts we know this is the 1970s. The first scene is a non-graphic but fairly harrowing rape scene, with a young female witness. Then we see a man leaving a bar in Dusseldorf. He takes his girlfriend into an alley for a bit of fun but it turns out to be fatal fun. And there’s the wild opening credits with lots of solarisation and females in costumes that are both scanty and kinky.

In Paris we see Françoise Frémond (Carole Lebel) applying for a job in a girlie bar called Le Sexy. We see those kinky dancers again. Christian Belmont (Christian Duc) is the creative force behind Le Sexy. He tells Françoise he’s going to call her Pervertissima (interestingly enough the following year van Belle made a movie called Pervertissima). He tells her to disrobe. When she leaves, she leaves a gift for him. A kind of parting gift.

This movie doesn’t bother explaining anything but what’s going on is perfectly clear. Françoise witnessed a rape (we later find out it was her sister who was raped) and now she’s going to kill the perpetrators one by one. 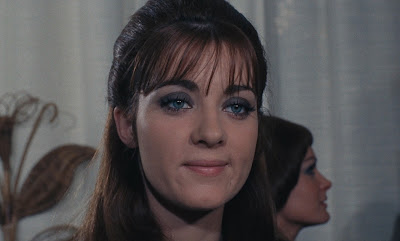 She embarks on a voyage of revenge across Europe. She’s a strangely calm detached killer. She doesn’t seem especially angry. She’s just doing what she has to do.

The voyage aspect makes the film quite entertaining. It’s a journey by car, train, plane and boat, leaving a trail of corpses.

That’s it for the plot. Which sounds like the sort of thing an Italian film-maker of that era would relish. But this is a French movie. It’s stylish in its own way but it lacks the flamboyance of, let’s say, a contemporary Italian giallo. It’s stylish in a cool sophisticated French way.

It also lacks the gore. The violence is very very restrained and much of it happens partially or completely off-camera. 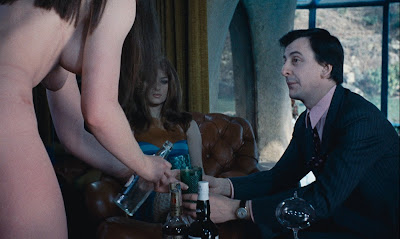 There’s an enormous amount of nudity but that’s also very restrained - there’s no frontal nudity at all. There’s no graphic sex. The rape scene is tame by 1970s standards. The only scene with the potential to shock is the one in which Françoise volunteers to be whipped as part of the process of getting close to one of the rapists, a sleazy photographer. But it’s one of the mildest whipping scenes you’ll see in any movie of that period. What makes it kinky is that the sleazy photographer isn’t excited by watching Françoise being whipped - it’s the sound of the whipping, and more particularly Françoise’s whimpers of pain, that gets him off. He likes to record such sounds so he can enjoy them again later. It makes the scene both tame and at the same time very perverse.

What I’ve said so far will probably have convinced most hardened eurosleaze fans to give this one a miss but don’t be too quick to do this. This movie does have some major assets. The explicit content might be mild but there’s plenty of implied kinkiness.

The settings are terrific. The highlight is the underground rock grotto photographic studio owned by one of Françoise’s victim, a studio which comes complete with an underwater tank. Which is of course filled with naked women. There are naked women littered about all over the studio, most of them sporting psychedelic body-painting. The decadence level in these scenes is off the scale. There’s plenty of decadence in the sex club (Le Sexy) as well. There’s no shortage of interesting perversity. 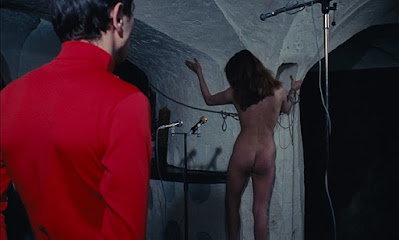 Carole Lebel is rather luscious and her acting is reasonably solid - she’s supposed to be playing a woman who has seriously lost the plot and she achieves this with commendable subtlety.

Mondo Macabro’s Blu-Ray offers a good anamorphic transfer and it’s a double-header - we get a second Jean-Louis van Belle feature as well, Pervertissima. There are some reasonably worthwhile extras as well (as there always are in a Mondo Macabro release).

The Lady Kills is an intriguing exercise in subtle perversity. Recommended.

This movie belongs in the rape revenge sub-genre, which was very big in the early 70s. Other notable entries in this sub-genre include Thriller: A Cruel Picture (They Call Her One Eye, 1974) and the excellent Hannie Caulder (1971).