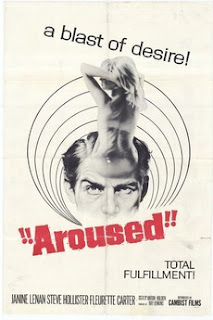 Aroused is a 1966 New York-shot American sexploitation movie belonging to the roughie sub-genre. It was directed by Anton Holden who also co-wrote the screenplay. It’s unusual because it has a somewhat professional feel to it.

The movie opens with the murder of a prostitute named Pat Wilson, and we soon discover that it’s the latest in a series of such murders. We don’t know at first who the murderer is and the cops don’t have much in the way of leads. We do pretty quickly figure out the killer’s identity and that’s where the suspense kicks in.

Johnny (Steve Hollister) is a young Homicide detective and he’s apparently a bit of a hot-head. He’s also not yet hardened to the sight of pretty young women who have been brutally murdered. He’s very keen to catch this killer.

Ginny Smith (Janine Lenon) is a hooker and she and Pat were good friends. She’s hit very hard by Pat’s death and she’d really like to get her hands on the murderer before the police do. If she does she intends to slice him up with a knife and she’s the kind of girl who might well try to do just that.

In typical cop movie style we have an older hardbitten detective who goes by the book because that’s what works, and a rookie who will need to learn that lesson. 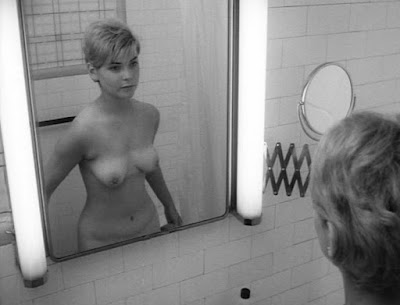 Johnny thinks that he and Ginny have come up with a great lan. They’ll use one of Ginny’s hooker friends as bait for the killer. It wouldn’t be a bad plan if Johnny bothered to tell his colleagues on the force so they could arrange proper backup and surveillance to protect the girl. But Johnny is a loose cannon cop who thinks he knows it all and thinks he can crack the case single-handed.

Aroused has an interesting feel. It’s like a reasonably good 1950s police procedural crime B-picture with some film noir tinges but with added sleaze and added nudity. It has an authentically gritty seedy mean streets atmosphere and plenty of hardboiled dialogue. It feels like a low budget movie, but not a zero-budget one. And it gives the impression of being made by people who were trying to make a real movie and taking it fairly seriously. 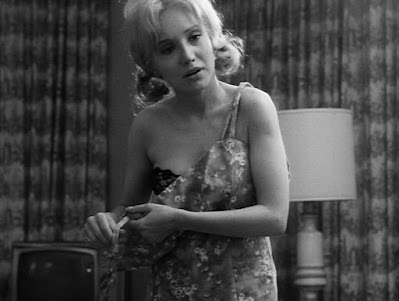 It doesn’t have any of the weirdness or outrageousness or off-the-wall quality you expect in a sexploitation feature. It’s like a cheap mainstream suspense crime thriller. And it works quite well as a suspense thriller. There are even a couple of not-too-bad action set-pieces (the elevator scene is very well done).

And it’s certainly sleazy and grimy. The killer rapes his victims after he kills them. At a time when Johnny should be concentrating on the case he’s getting a blow job from a hooker. Then he tells the hooker that he loves his wife. He’s not likely to be nominated for Cop of the Year, or Husband of the Year.

Aroused was shot in black-and-white and it looks pretty terrific. It has a classic film noir look. It has some nice night shots of the streets of New York City. 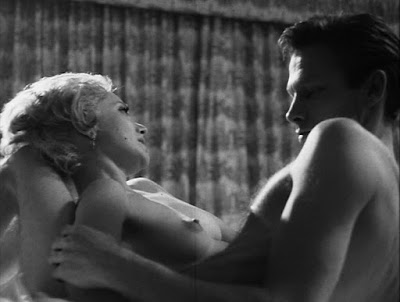 One of the attractions of 1960s American sexploitation is the fact that the women are pretty but they look like real women. There’s nothing surgically enhanced about them. There is a lot less nudity than you would expect.

The acting is quite decent. Many of the cast members give the impression of probably having had at least some actual acting training.

Director Anton Holden made a handful of sexploitation movies in the 60s but he went on to have a reasonably solid mainstream career as a sound editor.


And then there’s the ending, when it suddenly becomes a true sexploitation roughie. The ending is foreshadowed but still comes as a bit of a shock.

This is part of a Something Weird triple-header, along with the excellent Rent-a-Girl and the deliriously wonderful Help Wanted: Female. Which makes this a very strong Something Weird release, in fact pretty much a must-buy.

Aroused is a fascinating hybrid and as such it’s definitely worth seeing. Highly recommended.