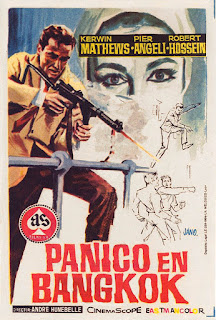 OSS 117 Panic in Bangkok (AKA Shadow of Evil) is one of the very popular French OSS 117 eurospy movies.

The character of Hubert Bonisseur de La Bath was created by Jean Bruce in a lengthy series of spy novels. After his death the series was continued by his wife Josette and later by his daughter Martine and her husband. The series eventually ran to over 250 novels (published between 1949 and 1993). The first movie adaptation was made in 1956. The character was revived very successfully in 1963 with OSS 117 Is Unleashed featuring American actor Kerwin Mathews as OSS 117. OSS 117 Panic in Bangkok followed in 1964, again with Kerwin Mathews. It was the first film in the series to be shot in colour and in the Cinemascope aspect ratio. The success of the previous film had obviously led to an increase in the budget.

An agent has been killed in Bangkok. He was investigating an outbreak of plague in India. The plague outbreak seems to be associated with anti-cholera vaccinations. OSS 117, using the name Hubert Barton, is sent to take the place of the deceased agent. His aim is to find out what is going on Hogby Laboratories (which produces the anti-cholera vaccine).

He is tailed as soon as he arrives in Bangkok and he finds someone searching his hotel room (which leads to some martial arts action).

He’s also interested in his secretary Eva Davidson (Dominique Wilms). OK, he’s interested in anything in a skirt. The problem he has on his hands is two very attractive young women who are both mixed up in the case in some way but can he trust either of them?

He has an ally in the person of his assistant Mr Sontak (Akom Mokranond). He can trust Mr Sontak. Probably. What about Dr Hogby? The plague seems to be originating from his company but whether Dr Hogby himself is involved is an open question.

The problem with this film is that, at 105 minutes, it is much too long and the pacing suffers. It takes way too long for the plot to really kick in.

Once it gets going the plot is quite good. There’s a diabolical criminal mastermind, a fiendish secret society and a plot for world domination.

There’s some great location shooting (done in Thailand). The bad guys’ secret headquarters (complete with mad scientist laboratory) is pretty cool. There’s nothing to complain about as far as the visuals are concerned. There’s too long between the action scenes but they are done quite well.

Kerwin Matthews makes a decent hero, with plenty of charm. The supporting cast is solid and the film’s two babes, Pier Angeli and Dominique Wilms, look great although their acting is not quite so impressive.

The problem facing everyone in the 60s trying to cash in on the Bond craze is that none of them had the budgets to match the action set-pieces of the Bond films. The best of the eurospy movies compensated for this by upping the craziness levels. This one doesn’t quite have enough outrageousness. It does have some outrageousness but we have to wait a long time for it.

Kino Lorber have released five of the 1960s OSS 117 movies in a boxed set (available in both Blu-Ray and DVD versions). OSS 117 Panic in Bangkok gets an excellent transfer.

OSS 117 Panic in Bangkok is a good but not great eurospy movie. Had it been cut by twenty minutes or so it would have been a very good eurospy movie. It was however a substantial box-office success and led to further OSS 117 movies.

It’s reasonably good entertainment and it looks wonderful, so it’s recommended.
Posted by dfordoom at 17:09

It's actually 118 minutes lol. And, boy, does it feel like it! I took two nights to watch this - the first time I gave up when I realised I was only two-thirds through. It would have made a great episode of something like The Saint - it's basically a 45-minute plot in a two-hour movie.

On the plus side, it's a rare example of a film where the second half is better than the first half. The villain's pretty good - in the original French audio, he sounds so cold and composed; really quite effective.

The location filming, like the previous film, is a real plus, especially the finale. All it really needed was some heavy-duty editing.