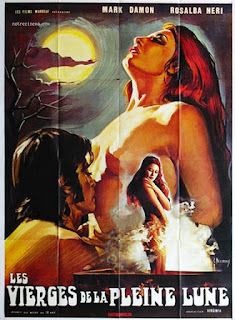 The Devil’s Wedding Night (released in the U.S. under the much drearier title The Devil’s Crypt and originally known as Il plenilunio delle vergini) begins the way a vampire movie should begin, with a girl in her nightie fleeing through a forest being pursued by something evil and horrible.

This is in fact yet another screen retelling of the tale of the notorious Elizabeth Báthory, reputed to be the most prolific female serial killer in history and in movie versions often referred to (for no good reason) as Countess Dracula. She was the subject of the underrated Hammer horror film Countess Dracula.

Luigi Batzella is the credited director although apparently Joe d’Amato also had a hand in directing this film.

Schiller (Mark Damon) is a scholar who believes that the Ring of the Nibelungs really exists and that it possesses supernatural powers. He intends to find it. He appears to be a little bit mad.

Naturally his first port of call is Transylvania.

Schiller isn’t totally reckless. He has found a magical amulet which offers protection against supernatural forces.

He arrives at the castle of the Countess Dolingen de Vries (Rosalba Neri) and it just so happens that the castle is the Castle Dracula (this is a movie that is determined not to miss out on any gothic horror elements). The countess explains that evil reputation associated with Dracula allowed her to pick up the castle at a bargain price.

The countess is beautiful and mysterious and Schiller falls for her straight away. She tells him that she is attracted to him, but not quite in the way his other women have been. Pretty soon they’re in bed together. 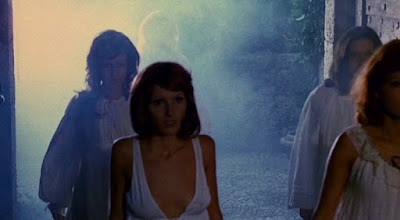 Schiller was a little disturbed by the Countess’s maidservant Lara. He sees Lara lying quite dead but shortly afterwards she is up and about again. The Countess tells him that people make the assumption that Lara is a zombie (yes, we’re going to get zombies as well).

Now we get our first plot twist. There are two Schillers. Twin brothers (both played by Mark Damon). The one who slept with the Countess was Franz. She seems to have plans to turn him into a vampire.

Unfortunately Franz has managed to lose the amulet. Carl is going to try to rescue his brother but without the amulet that’s going to be dangerous. 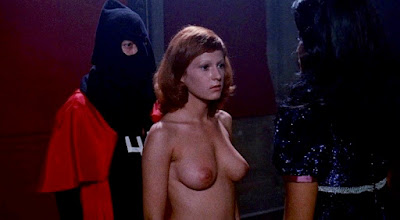 This movie muddles together every sort of supernatural theme imaginable. It really has almost nothing to do with Elizabeth Báthory, who for all her reputation for evil was never actually accused of vampirism. The movie just throws vampires, witchcraft, a spooky castle, a sexy evil countess and zombies into the mix and hopes that some sort of coherent plot will emerge. In practice there is no trace of plot coherence at all. We know that the Countess is a very bad lady and that she has wicked plans for Franz and that’s about it for a plot.

We do find out that she has a band of female disciples. Whether they’re vampires or zombies is a bit unclear.

The climax of the movie is the Countess’s plan for some kind of wedding to Franz combined with a black magic ritual. 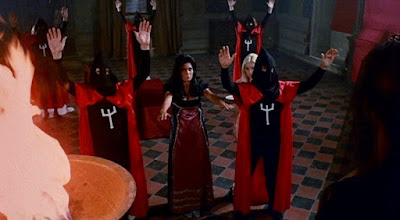 A lot of European exploitation movies of this era are actually pretty good movies. When you’re dealing with guys like Mario Bava, Jess Franco, Dario Argento, Jean Rollin, Massimo Dallamano and Sergio Martino you’re not dealing with mere hacks. These were twisted visionaries who were able to make movies that combined commercial exploitation elements with interesting thematic explorations and genuine visual inspiration. While their movies have often been dismissed by the mainstream as trash they were a good deal more than that.

But it has to be admitted that European exploitation cinema had its share of directors who really were hacks and Luigi Bartzella would seem to belong in that category. His approach to directing is to add lots of thunder and lightning to just about every scene. And some of the euro-exploitation movies of the 60s and 70s really were mere trash, and I think it’s fair to put The Devil’s Wedding Night into that category.

Slightly oddly for a 1973 eurohorror movie this one has the look of a Hammer horror film (or a Roger Corman Poe film). We’re somewhere in central Europe and it appears to be the late 19th century (Poe gets a mention so it must be mid to late 19th century). 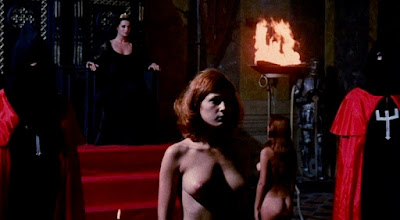 I think it’s very unlikely that anyone ever hoped that this movie would be taken seriously but if they did then any such hopes would be dashed by the outrageously melodramatic music.

By 1973 European exploitation standards this movie is a bit on the tame side. The sex scenes are very tame and the nudity is limited to boobs and bums. Of course it has to be remembered that most of these movies existed in multiple versions, with very toned-down versions for some markets and much racier cuts for other markets. Other cuts of this movie undoubtedly existed. The Code Red Blu-Ray release offers the U.S. cut and it’s likely that the versions for some of the European markets were raunchier.

There’s a lot of print damage and it’s quite distracting at times. This is a barebones release.

If you’re in the mood for silly vampiric fun then the movie is reasonably enjoyable. It does pick up towards the end and it is fun. Recommended if you’re a eurohorror completist. The print damage might be off-putting if you’re fussy about such things.
Posted by dfordoom at 01:12

I first saw this in the toned-down Elvira version. Trash it is, but it is exuberant trash, and for some reason throwing all those Gothic elements into the mix, along with a high fantasy-type quest, just worked for me. :)