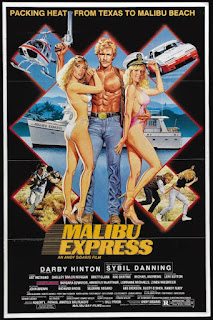 I have a shocking confession to make. I have never seen an Andy Sidaris movie. I know, I’m embarrassed about it. The reason is simple. For me cult movies has always meant cult movies from the 1930s to the 1970s, and especially the 60s and 70s. The 80s has been largely unexplored territory for me. And the 90s has been almost totally unknown territory. I now intend to correct this shocking omission and I’m going to start with Sidaris’s 1985 offering Malibu Express which seems to be one of his better known movies.

Cody Abilene (Darby Hinton) is a PI. Cody likes being a PI but mostly he seems to like girls. Early on we get one of those clichéd scenes in the gunnery range where the hero demonstrates what a crack shot he is with a pistol, usually amazing the instructor with his prowess. But in this case the cliché is wittily turned on its head. It turns out that Cody is a lousy shot. It’s a promising start.

Within the first few minutes we also get lots of boobs. That’s also a promising start, given that the Andy Sidaris formula seems to be action, humour and boobs. That’s not such a bad formula really.

Early on we also get a scene at a racing track with fast cars. I don’t think it has anything to do with the plot but fast cars are cool, especially when driven by gorgeous babes such as June Khnockers (that’s Khnockers with an “h”). Gorgeous babes who disrobe as soon as they’ve finished driving. I’m liking this movie already.

This is not just a private eye movie, it’s a spy movie as well. Those dastardly commies are stealing American computer technology. Someone has to infiltrate their organisation but it has to be someone unknown to the bad guys’ intelligence services. Cody is selected. He isn’t exactly qualified for the job but maybe that will be an advantage. Nobody is going to suspect a laid-back girl-crazy cowboy like Cody. 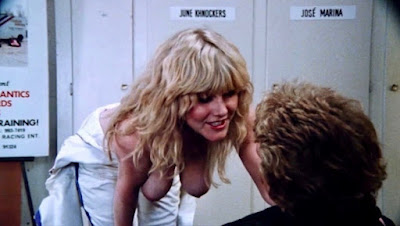 The Contessa Luciana (Sybil Danning), who works for some high-powered intelligence agency, has recruited Cody for this mission. She explains his mission to him, but first they have sex. A girl has to get her priorities right. The Contessa suspects that somebody in the household of Lady Lillian Chamberlain (Niki Dantine) may be involved. It’s a very odd household. Lady Lillian lives there with her son Stuart, his wife and Lady Lillian’s daughter. The chauffeur, an oily character by the name of Shane (Brett Clark), is having sex with both Lady Lillian’s daughter and daughter-in-law and he’s blackmailing them.

Shane and the women are mixed up with a shady computer industry guy.

Pretty soon there’s a whole assortment of goons gunning for Cody. Luckily he gets some help from one of his many girlfriends, a lady cop named Beverly (Lori Sutton).

Then there’s a murder in the Chamberlain household. There’s an important clue to the murderer’s identity, a clue that Cody initially fails to spot. 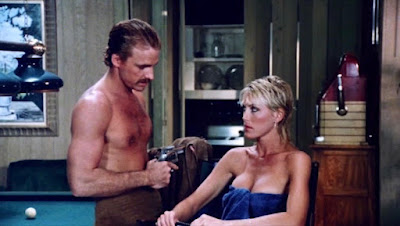 There’s lots of mayhem. Lots of unarmed combat and lots of gunfights. There are a couple of extended gunfights that are quite cleverly done, making use of an important fact established at the beginning of the movie - Cody is the world’s worst pistol shot. He fires hundreds of rounds in the course of the movie and he just keeps missing. It’s an amusing reversal of the usual action movie cliché that the hero is always a better shot than the bad guys. Cody would have been dead several times over had Beverly not been on the scene. She actually can shoot. Cody isn’t bothered by the fact that a woman has to get him out of trouble. Later on, in a similar situation, June Khnockers has to get him out of trouble. She doesn’t carry a gun but she has a much more effective weapon (actually she has two of them).

Cody has so much easy-going self-confidence that his male ego isn’t the slightest bit fragile. He doesn’t mind that a woman can shoot better than he can and he doesn’t mind when a weird hillbilly family keeps inveigling him into drag races which Cody keeps losing. It’s a nice touch that makes Cody a very likeable character. It’s not that he’s a bad PI. He’s quite smart and he picks up some very obscure clues. He’s brave and resourceful. He just can’t shoot. 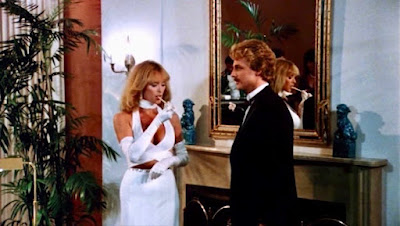 It’s rather cool that the hero drives a DeLorean. You can’t get much more 80s than that.

While I had never seen an Andy Sidaris movie I had heard of him and I’d formed the impression that his movies were total trash. It tuns out that my impression was correct. Malibu Express really is total trash. But I love cinematic trash as long as it’s entertaining trash and Malibu Express is very entertaining trash indeed. This is high-grade top-quality trash with an incredibly high fun content.

Sidaris wrote the script and it has some genuinely funny moments. There’s some amusing dialogue. When the two babes who are neighbours of Cody find out he’s a PI they tell him, “We heard you were a private investigator. We wanted to know if you’d investigate our privates.” Sidaris knows the right ingredients for a movie like this. Lots of action, lots of humour, lots of nudity (T&A only) and lots of simulated sex. And the ladies really are lovely and this movie is genuinely sexy in a fun way.

Darby Hinton is pretty good. He has charm and charisma and he’s likeable. Sybil Danning doesn’t get enough to do but what she does she does well. The rest of the acting is pretty bad, but it’s bad in a good trash movie way. 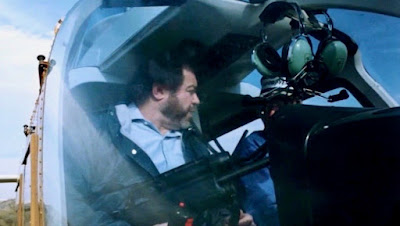 Sidaris understood the essentials of low-budget film-making. You don’t need a story that makes much sense and you should never delude yourself that you’re doing anything other than making pure entertainment. You need to make your movie fast-paced and you need to load it with entertainment value. Entertainment value means action scenes, humour and babes. He was also a firm believer in location shooting in glamorous surroundings. It makes a cheap movie look a lot more expensive than it really is.

I bought the Mill Creek Andy Sidaris DVD boxed set, Girls, Guns and G-Strings. Amazingly good value and it even includes commentary tracks and the transfers are quite acceptable. Most of these movies now seem to be on Blu-Ray but I thought the bargain DVD set would be a good introduction to the cinematic world of Andy Sidaris.

Malibu Express comes with an informative and very amusing audio commentary by Sidaris and his wife and collaborator Arlene. It’s one of the best audio commentaries I’ve come across in years - Sidaris doesn’t take himself the least bit seriously and he clearly had a great time making his movies. His enthusiasm is infectious.

Malibu Express isn’t a great movie in conventional film-making terms, in those terms it’s not even a good movie, but it is a great exploitation movie. It’s just non-stop fun. Highly recommended.
Posted by dfordoom at 19:07