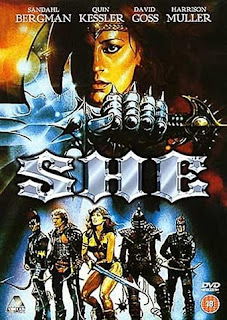 She is a crazed 1984 exploitation movie based on H. Rider Haggard’s 1887 novel of the same name (one of the bestselling novels in history and one of the finest ever examples of the lost world adventure tale). When I say it’s based on Haggard’s novel, I mean loosely based. Very loosely.

It’s an Italian movie shot in Italy but in English with an Israeli director.

This is a post-apocalyptic dystopian action thriller with several other genres thrown in for good measure.

The movie is set sometime in the future after civilisation has collapsed and humanity has reverted to barbarism. Tom (David Goss) and Dick (Harrison Muller) are two brothers who are at a village market when the village is attacked by Nazis. Their sister is kidnapped.

The attackers actually seem like a combination of Nazis, bikers and clowns but they’re mounted on horseback.

Now one thing I don’t want you to think is that this is a movie with a coherent plot. It isn’t. In fact for most of the running time there doesn’t appear to be any central plot. It’s mostly just a series of crazy adventures. Insofar as there is a plot it’s a series of quests during a journey to the kingdom of the Norks (they’re the Nazi dudes). 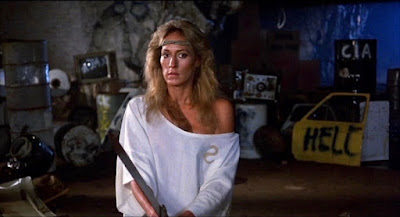 Tom and Dick are captured also. They’re going to be sold into slavery. They end up in the hands of She (Sandahl Bergman). She (obviously based on Ayesha or She Who Must Be Obeyed from Haggard’s novel) rules a tiny queendom. She’s a goddess. At least her followers think she’s a goddess. She never gives any indication that she has much in the way of goddess powers although she can be healed instantly and it’s implied that she might be immortal (like Ayesha in Haggard’s novel). Her followers are women. She has a devoted lieutenant in the person of Shandra (Quin Kessler).

For no reason that is ever explained She forces Tom to under the brutal ordeal of walking the path (which results in his being stuck with lots of sharp pointy things).

Also for no clearly defied reason She undergoes an ordeal of her own. She enters a warehouse where she has to fight a whole bunch of fearsome opponents some of whom look like mediæval knights and some of whom are robots. 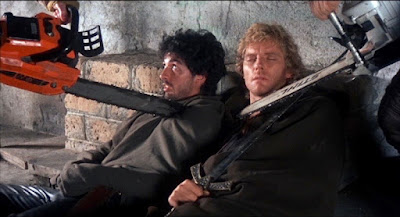 She survives the ordeal but even though she’s a goddess she ends up pretty banged about. Luckily in her palace there’s a magic healing pool.

For reasons that are not made terribly clear Tom, Dick, She and Shandra then undergo a series of adventures. Maybe they’re quests but if so we have no idea what their purpose is. Naturally they encounter mutants (it wouldn’t be a post-apocalyptic movie without mutants), they encounter a bunch of weirdos who seem to be living out some kind of Roman Empire fantasy except they’re not just weirdos but something much nastier.

And then they get captured by communists. Although this movie contains both Nazis and communists I get the feeling that this was just so they could have bad guys wearing Nazi insignias and other bad guys with hammer-and-sickle insignia. They don’t seem to be actual Nazis or communists. 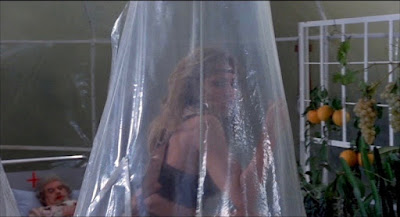 In fact the communists worship a god. They seem to be communist monks. At least he says he’s a god. He does appear to have some god-like powers.

This movie starts weird and messed-up and it just keeps getting weirder and more messed-up. I haven’t even mentioned the mad scientist and the guardian of the bridge yet.

One odd thing is that there’s lots of surviving modern technology (gramophones, chainsaws, etc) but guns seem to be unknown. I think the reason for this is obvious when you think about it. This is a Chicks With Swords movie, not a Babes With Guns movie.

Obviously any post-apocalyptic movie released in the mid-80s was going to be influenced by the Mad Max movies, especially Mad Max 2: The Road Warrior. But the 80s sword-and-sorcery boom was starting to get underway. Visually this movie is a mixture of the Mad Max and sword-and-sorcery aesthetics with some truly bizarre surreal touches thrown in. The look of the film really is all over the place but at least it’s never boring. 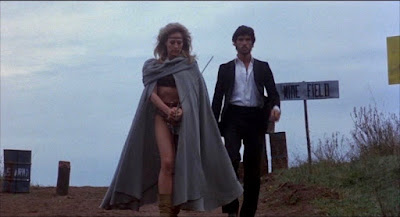 Despite the presence of Nazis, communists, religious cults and numerous gods I’m not convinced that there’s any intended ideological or religious message here. Unless maybe the message is that all ideologies and religions can get pretty weird.

There’s a wild battle scene and the ending is a slight surprise.

Kino Lorber have put this movie out on both DVD and Blu-Ray. It looks pretty good. The only extra is an interview with Avi Nesher.

She is perhaps a bad movie but it’s a weirdly fascinating and hypnotic bad movie. You genuinely have no idea what it’s going to throw at you next.