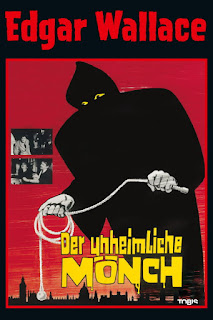 In 1926 Edgar Wallace wrote a novel called The Black Abbot. It was very popular and the following year he turned it into a stage play under the title The Terror, which then became another novel. The play was filmed more than once, the 1938 British movie The Terror being a particularly good version. The original novel was the subject of one of the West German Edgar Wallace krimis, The Black Abbot, in 1963. Two years later Rialto adapted the stage play under the title Der unheimliche Mönch (The Sinister Monk). This movie was directed by Harald Reinl.

A very very rich old man is dying. He considers his children to be a sorry lot (and as we will find out his judgment is spot on) so he writes them out of his will. His home, Darkwood Hall, will go to his daughter Patricia so she can continue to run her girls’ boarding school but the rest of his vast estate will go to his beloved granddaughter Gwendolin (played by krimi regular Karin Dor).

The will goes missing. Without a will the estate will be divided equally between the children, except for Gwendolin’s father who is serving a life sentence for murder.

One of the sons has come up with a rather nasty scheme. And Patricia’s oily son Ronny has come up with a nefarious scheme of his own. There’s obviously plenty of potential for trouble, and just as obviously there are going to be quite a few people with motives for murder and other crimes. 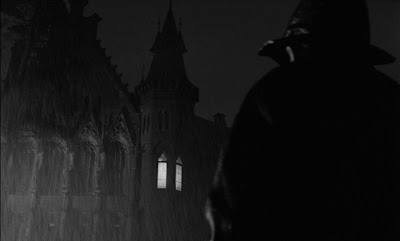 Ronny starts putting the moves on Gwendolin right away, as part of his plan.

At about this time the monk makes his appearance. The legendary monk of Darkwood Hall is the ghost of a long-dead monk (Darkwood Hall was at one time a monastery). Of course in an Edgar Wallace krimi we tend to suspect that ghosts are not necessarily actual ghosts.

And then the bodies slowly start to accumulate. 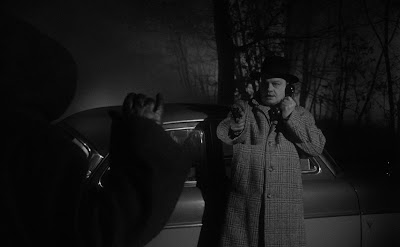 Apart from the family members (all of whom are potential suspects) there are other suspicious characters hanging about. There’s Monsieur d’Arol (Kurd Pieritz), the newly arrived French master who behaves rather oddly. There’s Mr Short (Rudolf Schündler), an artist who rents a room at Darkwood Hall. He could be an eccentric but harmless old gentleman or he could be a raving loony. There’s the school butler Smitty. Since Smitty is played by Eddi Arent we assume he’s one of the good guys but there’s still the chance he’s not what he appears to be. There are strange men lurking in the woods. And of course there’s The Monk.

That missing will provides a motive for murder but there are other possibilities, other nefarious schemes that may be hatching at Darkwood Hall.

Pretty soon the schoolgirls start getting drawn into the action although it’s not clear whether they’re innocent bystanders caught in the crossfire or whether someone has some reason for targeting one or more of the girls. One of the girls, the glamorous Lola, seems to be mixed up in something but whether as victim or conspirator is not clear. Lola carries a water pistol for protection. You might think that a water pistol would not be much protection for a girl but Lola has filled it with sulphuric acid making it a very nasty little weapon. And Lola is prepared to use it. 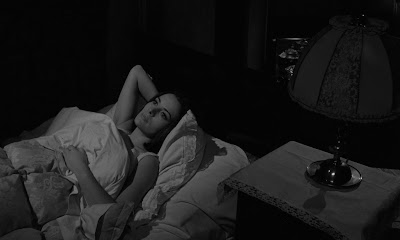 Sir John of Scotland Yard (Siegfried Schürenberg) is very worried. He has to find a murderer, and as well he has to protect not just Gwendolin but a dozen schoolgirls. Inspector Black (Harald Leipnitz) seems confident at first but soon he has things to worry about, such as staying alive.

The plot has several strands to it and lots of twists. Even as the bodies pile up we’re still left with multiple suspects and the eventual solution is both neat and outrageous.

Harald Reinl was one of the two best directors employed by Rialto on their krimi series (along with Alfred Vohrer). In this movie he keeps the action moving along briskly and keeps the complex plot fairly coherent. 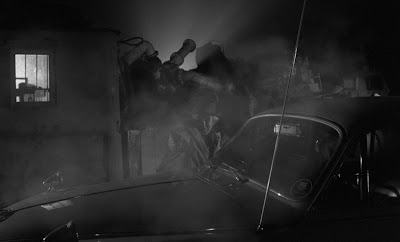 Mention should be made of Peter Thomas’s totally bizarre score.

This was an important movie in the history of the krimi genre. It was director Harald Reinl’s final krimi, it was Karin Dor’s last appearance in the series, and it was the last of the Rialto krimis to be shot in black-and-white. It was the end of an era and the beginning of a new one.

The Sinister Monk ended the black-and-white era on a high note. Lots of gothic atmosphere, some real horror, a fine plot. Highly recommended.
Posted by dfordoom at 13:17

One of the best of the series. Doesn't hang about, and if you're in the mood, as entertaining as hell. One or two of the twists and turns don't quite work, but the one at the end is one of the best in the series ...

Awesome cast - Karin Dor and Ilse Steppat are as great as ever, Harald Leipnitz funnily enough more often played villains, and there is a young Uschi Glas (the female lead in some of the colour krimis and a couple of Winnetous) as a schoolgirl

If you can't afford the Blu-Ray, the DVD is perfectly fine. I would also recommend this!

tom j jones said...
Awesome cast - Karin Dor and Ilse Steppat are as great as ever

I always liked Karin Dor. Unfortunately I think this was her last krimi.

If you can't afford the Blu-Ray, the DVD is perfectly fine

I only bought the Blu-Ray because the DVDs are becoming hard to get. I do have some of the krimis on DVD and yes, the DVDs are very very good.