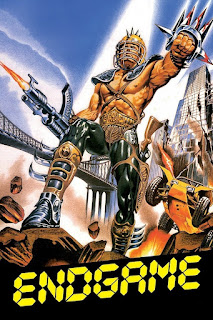 I’ve never really been into the post-apocalyptic thing but I’m always ready to give any exploitation genre a go. And Endgame, made in the 80s when such movies were a very big thing, sounded like fun. It’s directed and co-written by Joe D’Amato. Now I know what you’re thinking. With D’Amato involved this movie is going to be sleazy and tacky and total cinematic trash. In this case you’d be mostly right. It’s not sleazy (well OK it’s a bit sleazy) but it is very tacky and it is total cinematic trash. But I like total cinematic trash if it’s done right. And this one is definitely done right.

It’s set in 2025, with the world a post-apocalyptic nightmare after a nuclear war. The endgame of the title is the most popular form of entertainment in this shattered world. The idea is that one contestant is the prey and three other contestants are the hunters. If you win you can make big money. If you lose you die. Since the easiest way for the prey to win is by killing the hunters the game is just as dangerous whichever rôle you play. But there aren’t any other ways of gaining riches and fame in this world so there’s no shortage of players.

Ron Shannon (Al Cliver) is the current champion. He likes to play the prey. He has never lost.

This time he finds himself in big trouble. Maybe his luck has finally run out. But Lilith (Laura Gemser) offers to help him. 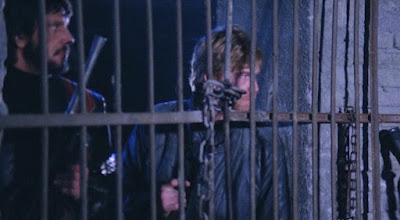 Lilith is a mutant. There are lots of mutants but Lilith belongs to a select group of mutants. They’re not physical mutants. Their mutation is that they have telepathic powers. Lilith offers Shannon a job. He’s to escort a group of these telepathic mutants out of the city to a place two hundred miles away. Getting out of the city safely is impossible. That’s why Shannon has been employed. If anyone can carry out an impossible task like this it’s Shannon. Shannon can’t do it alone so he puts together a team of seriously tough dudes to help him.

They run into lots of obstacles, including a group of murderous blind sword-wielding monks. They encounter enormous numbers of bad guys and consequently there are lots of action scenes. And they’re pretty well executed. And when you think it’s all over there’s still plenty of mayhem to come. 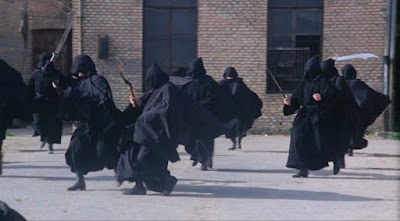 The original source for the endgame is of course Richard Connell’s 1924 short story The Most Dangerous Game. It’s a great story about a big game hunter who seeks the ultimate thrill by hunting human prey. The story has inspired countless movies. There are lots of other influences on this movie. John Carpenter’s Escape from New York is an obvious one. And any post-apocalyptic movie made in 1983 was going to be heavily influenced aesthetically by the first two Mad Max movies, especially Mad Max 2 (AKA The Road Warrior).

Nobody in this movie can act, but it’s a movie that doesn’t exactly require great acting. If the actors look right that’s enough. Laura Gemser is of course best known for her Black Emanuelle softcore movies, directed by Joe D’Amato. Gemser isn’t great but it’s a thankless part. Al Cliver as Shannon doesn’t quite have the macho screen presence his rôle requires. 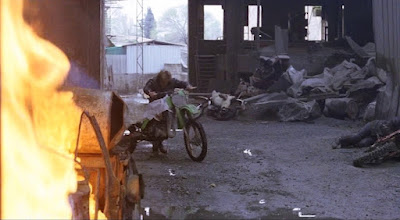 For a low-budget movies it’s fairly impressive visually. Italian film-makers of this era knew how to make a small budget go a long way. There’s a nice atmosphere of ruin and decay and squalor. The makeup effects on the mutants are pretty good.

The telepaths not only read thoughts, they read emotions as well. This makes them very touchy-feely, much too much so for my tastes. They look like they got lost on the way to Woodstock. The telepaths are accompanied by a non-telepathic neurosurgeon. He thinks the telepaths will create a new world of peace, love, brotherhood and group hugs. Amusingly the telepaths will eventually discover that while peace, love and understanding are great it’s handy to have a .50 cal machine-gun to back those things up. That’s what I like about this movie. Just when it starts to get sentimental and starts wallowing in emotional group bonding you suddenly realise there’s a nasty little ironic undercurrent. 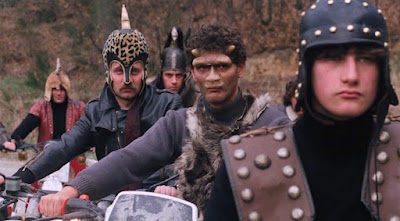 You’re never quite sure where D’Amato stands, whether he buys into the peace and love message or not. At times he seems to, but then he undercuts that message. Which makes the movie more interesting. There’s an intriguing mix of idealism and cynicism.

The violence doesn’t let up. It’s moderately graphic. Not quite buckets of blood stuff but action movie fans should be well satisfied. And there are a few grisly moments.

Severin have done a great job with the transfer. It’s quite stunning. There are no extras.

Endgame is a fun roller-coaster ride of an action movie. Highly recommended.
Posted by dfordoom at 14:38