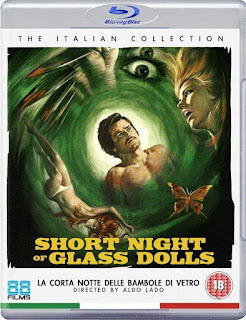 Aldo Lado’s Short Night of Glass Dolls seems to be widely regarded as a giallo. It has stylistic affinities with the giallo genre but it doesn’t quite fit, but it’s certainly rather giallo-esque.

The story takes place in Czechoslovakia (there was such a place in 1971). Gregory Moore (Jean Sorel) is an English journalist working there for a while, in a city (probably Prague). When the movie opens Gregory Moore is dead. But he doesn’t think he’s dead. He can still remember things. He remembers the whole strange story.

He had a very cute Czech girlfriend named Mira (Barbara Bach). She was hoping to go with him when he returns to London and Gregory thinks there’s a good chance he can pull some strings to allow her to do so.

Then Mira disappears. The police tell him to keep out of the case but of course he ignores them. With some help from his journalist friends Jacques (Mario Adorf) and Jessica (Ingrid Thulin) he starts looking for Mira.

This will cause some awkwardness, given that Jessica is Gregory’s former girlfriend and she’s still carrying a torch for him, in a big way.

Mira hasn’t been seen by any of her friends, she hasn’t been arrested, she hasn’t been taken to hospital, she hasn’t turned up at the morgue. Gregory clings to the hope that she’s still alive. The odd things is that if she left she must have been naked - all her clothing including her underwear has been left behind.

He figures that a good place to start his investigation would be by looking into the disappearance of other girls. There have been quite a few in the past few years. All seem to have left their clothing behind.

He gets an obscure clue from a crazy blind man but Gregory fails to spot its significance. He doesn’t recognise it as anything other than the rantings of a crazy man.

Gregory has a very vague suspicion that Mira’s disappearance may be connected to a very boring party they attended. The guests were all very important old people.

Butterflies and a tomato that feels pain (yes really) are also involved.

This is a mystery thriller but with added offbeat elements. We know early on that something very strange is going on, but we don’t quite know what it is. It takes Gregory a bit longer to realise that there’s something bizarre behind this mystery.

We can see why Gregory has so much trouble unravelling this puzzle. He knows he has some clues but they make zero sense and can’t possibly be related.

We expect that the final revelation will be fairly weird. And does it pay off satisfactorily? I think it does.

What’s nice is that even when we start to suspect that we understand very roughly the kind of territory we’re heading into there are still multiple ways that the ending could play out. The suspense is kept up right to the very last shot of the movie.

Jean Sorel is a French actor who made several giallos including the excellent The Sweet Body of Deborah (1968).

Barbara Bach of course went on to be a Bond Girl.

Writer-director Aldo Lado also made Night Train Murders (a movie I don’t care for) in 1975 but in 1972 he made the out-and-out giallo Who Saw Her Die? (a movie I like very much indeed). Short Night of Glass Dolls was his first time in the director’s chair and it’s a very assured and rather ambitious debut.

The 88 Films DVD (there’s a Blu-Ray edition as well) provides a very fine transfer. Both English and Italian language (with subtitles) options are included but the only extra is a trailer.

While I still don’t think this is a true giallo I think giallo fans will find a great deal here to enjoy. This is a leisurely-paced movie that relies on mystery and suspense rather than blood and gore but it does have some very macabre moments and the ending packs a punch.