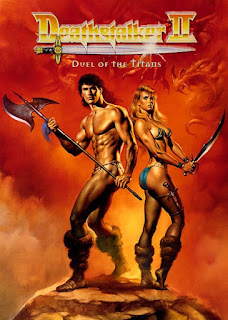 Deathstalker II is one of the many sword & sorcery epics churned out by Roger Corman in the 80s. This one is more deliberately cheesy and hammy than most but it’s good-natured fun.

It’s not a true sequel to Deathstalker, having little to do with the earlier film and being much more of a spoof of the whole sword & sorcery genre.

Thief and adventurer Deathstalker (John Terlesky) rubs afoul of a formidable lady named Sultana (Toni Naples) over a jewel he stole and she vows revenge. His problems really begin when he rescues Reena (Monique Gabrielle). In fact he has to rescue her a couple of times, much against his will and his better judgment. She insists that she is both a seer and a princess. He is sceptical.

In fact she is a princess but there are two princesses. The second is Princess Evie (also played by Monique Gabrielle. She is not only a fake princess, she’s not even human. She’s a clone created by evil sorcerer Jarek (John Lazar) in order to allow him to gain control of the kingdom. She’s also a sort of vampire (the screenplay throws in everything but the kitchen sink).

Reena wants Deathstalker to help her regain her throne. He has no desire to do this until she mentions that there will be a huge reward in it for him. 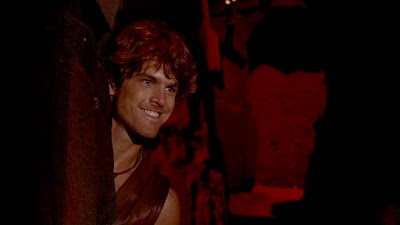 Reena and Deathstalker encounter zombies (it was the 80s and zombies were all the rage) and are captured by scantily-clad amazon warriors. Deathstalker has to fight their fiercest warrior Gorgo (played by lady wrestler Queen Kong) and she’s pretty terrifying.

The amazon queen (played by María Socas) isn’t such a bad sort after all. She does make him engage in a fight-to-the-death with Gorgo and then tries to force him into marriage (being an amazon tribe they’re short of men) but when her plans are foiled she doesn’t hold a grudge. The amazons turn out to be on the side of the good guys (even if Reena gets pretty jealous when she catches Deathstalker canoodling with the queen).

Jarek of course has despatched a team of terrifying thugs to track down and capture Princess Reena. He needs her alive because if she dies then the fake princess will die too). 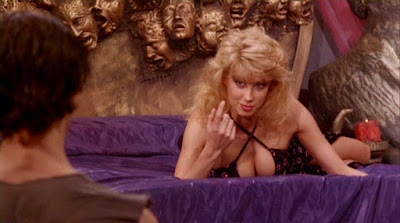 We then get a succession of pretty enjoyable action sequences interspersed with lots of gags and pop culture references). They even find a way to add explosions to a sword & sorcery movie.

It’s all very silly but in a likeable way and director Jim Wynorski keeps the pacing breathless.

It was shot at a small studio in Argentina, using a lot of the sets built for the first Deathstalker movie. Most scenes were shot at night, making extensive use of fog machines, otherwise you’d have seen the freeway in the background. 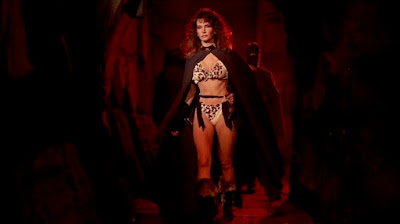 The acting is very broad. John Terlesky and John Lazar ham it up unmercifully and the three main actresses have plenty of fun vamping it up. Monique Gabrielle handles her dual roles well, being sexy and evil as Evie and cute and adorable as Reena. María Socas takes things more seriously than the rest of the cast but she’s excellent as well.

This is a Roger Corman movie and Corman liked to save money. In this movie Deathstalker encounters hordes of miscellaneous thugs and henchmen but in fact they’re just three guys. Their faces are always masked so that the audience thinks Corman paid for lots of extras. 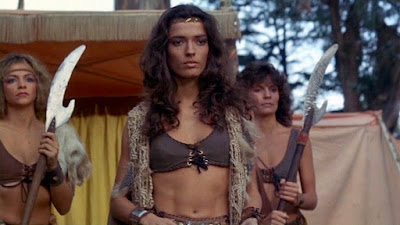 The end credits sequence is basically a blooper track.

Shout! Factory include this movie in their excellent four-movie Roger Corman Sword & Sorcery DVD boxed set. Deathstalker II gets a very good transfer and there’s an audio commentary featuring director Jim Wynorski and stars John Terlesky and Toni Naples. It’s obvious that they had a ball making this movie.

Deathstalker II is definitely not an attempt at a serious sword & sorcery movie. It’s silly and goofy but it’s fast-moving, exciting and amusing. If you’re in the mood for a real beer and popcorn movie this one should fit the bill. Very highly recommended.