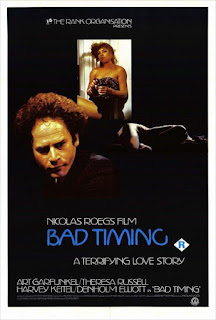 Nicolas Roeg was one of the most interesting and provocative directors of the 70s and 80s. He made very few feature films and only a tiny handful were commercial hits. Roeg was too innovative and cerebral for mainstream tastes and mainstream critics, quite apart from the sometimes disturbing eroticism of his films. Roeg pretty much made the movies he wanted to make and he made them the way he damn well wanted to.

Bad Timing, released in 1980, is typical of his work. Roeg plays around with narrative. The story is told in a series of flashbacks.

As the movie opens Milena (Theresa Russell) is being rushed to hospital in an ambulance, in Vienna. With her in the ambulance is Alex Linden (Art Garfunkel). At this stage we have no idea what the relationship is between these two.

We slowly start to piece things together. Milena has taken an overdose of pills. Attempted suicide is likely. Alex is being interviewed by a policeman at the hospital and from this point on the movie shuttles back and forth between the present and the past and we start to learn about the tumultuous relationship between Milena and Alex.

The policeman is very concerned about the time question. Alex phoned for the ambulance at 1.30am. He wasn’t in the apartment when Milena took the overdose. He knew about it because she telephoned him earlier in the night to tell him she was going to kill herself. What the policeman is interested in is the timing of Milena’s telephone call. Alex is extremely vague about this, which naturally makes the policeman even more interested. We the audience know when Milena called but we don’t know the reason for the time discrepancy.

Milena is clearly a bit of a wild child. She obviously drinks a great deal. Her behaviour is extravagant and perhaps a little eccentric.

It proves to be a stormy relationship. Alex is jealous of the other men in Milena’s life. There are other men in Milena’s life but it’s not absolutely clear if she’s actually unfaithful to Alex. But it’s easy to see why he suspects that she is. He’s almost certainly right. And then there’s the husband she forgot to tell him about. The husband is a Czech, Stefan Vognic (Denholm Elliott). By coincidence Alex does some work for American Intelligence and at the moment he’s doing a profile on, you guessed it, Stefan Vognic. It’s all top-secret so Alex has no idea if Vognic is some kind of spy or if he’s under some kind of suspicion.

The case of Milena’s attempted suicide has now passed into the hands of Inspector Netusil (Harvey Keitel). Netusil isn’t entirely satisfied. It’s not that he has any actual suspicion that any kind of crime has been committed, but it worries him a little that Alex’s story is so vague. Netusil is a cop and it’s in his nature to worry whenever anything doesn’t seem to add up neatly.

There’s no attempt to offer a conventional connected narrative. What we get are brief snippets of Alex and Milena’s life together. Mostly the flashbacks are Alex’s memories but on occasions they’re Milena’s.

This is not to say that this movie is incoherent. It’s not the least bit incoherent. At the time the movie was released some viewers (and critics) found Roeg’s approach disorienting, and they found the rapid-fire editing very disorienting. But in fact we do get a perfectly clear picture of Alex and Milena’s life together and it’s not the slightest bit difficult to piece the narrative together. You just have to be patient.

Roeg used similar techniques in his other movies, techniques like intercutting sex scenes with other scenes. He did this in Don’t Look Now and The Man Who Fell To Earth.

In the course of his investigation Inspector Netusil visits Alex and Milena’s apartment. We then get rapid intercutting that gives the impression that Netusil is witnessing scenes between Alex and Milena. This technique works well. Netusil is a good cop. It’s as if he’s seeing things that he surmises must have happened, and we assume that they did happen.

It’s significant that at one point we see Alex delivering a lecture on voyeurism, and that he does work for an American spy agency. Alex believes that we are all in a sense spies or voyeurs. Inspector Netusil, being a policeman, is of course in a sense a spy. And of course the viewer of the movie is a voyeur of sorts.

Alex and Milena are hopelessly wrong for each other. Alex likes to have his life organised and planned out. Milena lives in the moment. Alex is not an overly nice guy, he’s very controlling, but maybe he was just never going to cope with Milena. Maybe she was always going to bring out his dark side.
The problem is that they're both obsessed and it's a sexual obsession. They really can't get along together but they cannot overcome that sexual obsession. In Alex's case it becomes an obsession with control as well as sex.

And maybe in the end it all comes down to bad timing. Had they met five years later Milena might have been ready for what Alex was offering - marriage and commitment. Maybe everything that happens to us comes down to that - something happening at the right time can be the best thing that ever happened to us but the same event at the wrong time can lead us to disaster.

Art Garfunkel is surprisingly extremely good. It must have been a difficult and harrowing role for him, since his real-life girlfriend committed suicide while he was making the movie.

This is one of four movies Theresa Russell made with Nic Roeg (to whom she was married for quite a while). She’s superb here, playing a woman who is certainly not an obviously sympathetic character but Russell makes us care about her. Milena is an accident waiting to happen, but she’s confused and unstable rather than evil.

It’s fun seeing Harvey Keitel playing a sympathetic character. Inspector Netusil is a good cop but he’s a cop who uses his brains rather than his fists. And he’s basically a pretty decent guy, even a nice guy. Casting Garfunkel and Keitel in this movie proved to be masterstrokes. They’re faced with challenging roles and they deliver the goods with slightly offbeat performances.

There’s certainly some disturbing eroticism in this movie but to reveal details would mean revealing spoilers.

The Criterion DVD offers an excellent 16:9 enhanced transfer (the movie was shot in the 2.35:1 aspect ratio). There’s a British Blu-Ray release from Network. The Criterion DVD is the version I watched.

Bad Timing is a dark and disturbing masterpiece. Very highly recommended.
Posted by dfordoom at 04:43

This movie is so goddamn brutal. Just recently saw it about two years ago. Probably not a rewatch like, say, Don’t Look Now. It’s a masterpiece nonetheless.
I can no longer handle Art Garfunkel.